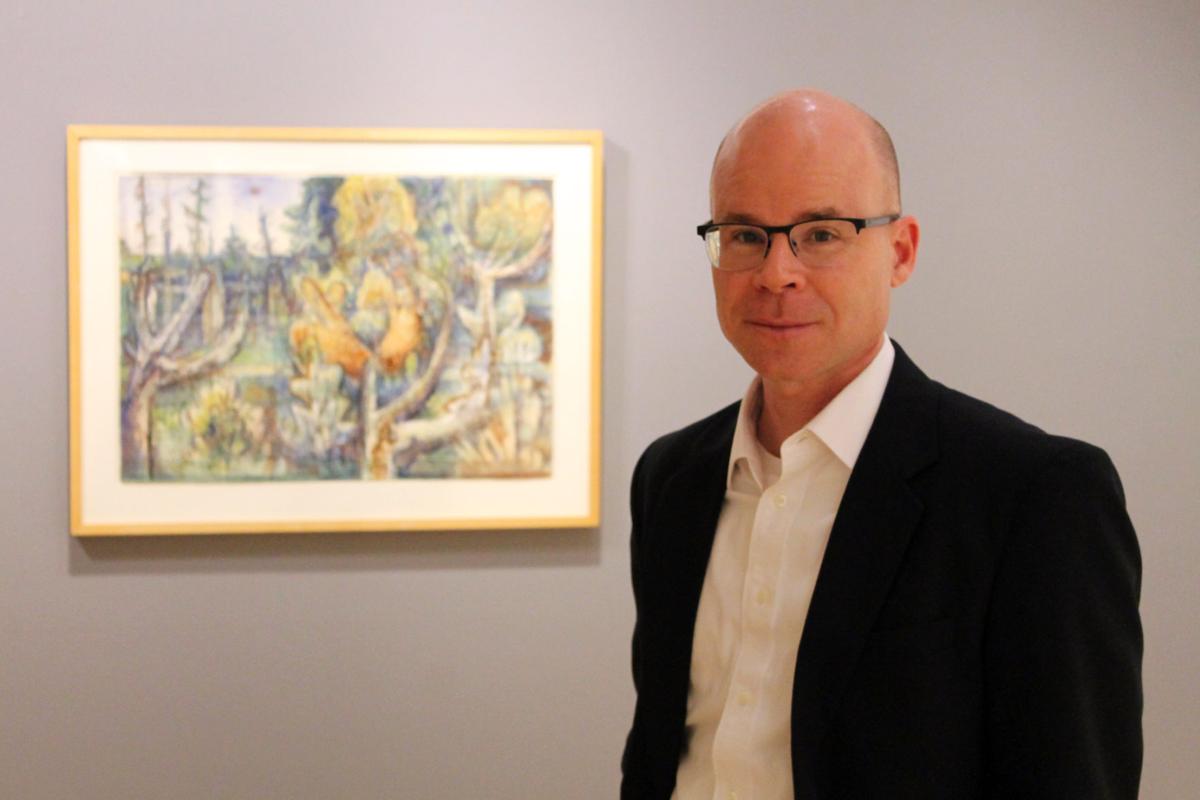 David Cateforis, professor in the University's History of Art Department and curator of the exhibition starting Sept. 25, stands in front of Albert Bloch’s 1946 watercolor "Garden Arabesque." 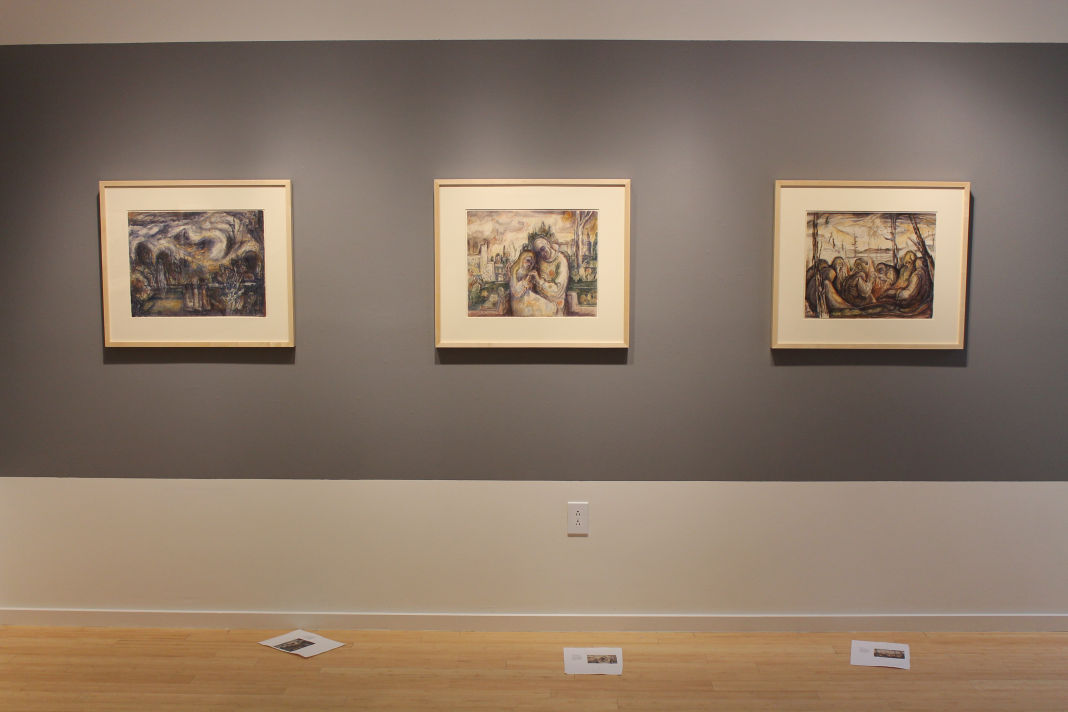 Cateforis said he organized Albert Bloch's paintings by theme instead of chronological for viewers to "really see each artwork."

David Cateforis, professor in the University's History of Art Department and curator of the exhibition starting Sept. 25, stands in front of Albert Bloch’s 1946 watercolor "Garden Arabesque."

Cateforis said he organized Albert Bloch's paintings by theme instead of chronological for viewers to "really see each artwork."

The exhibition, titled “Themes and Variations. Paintings and Watercolors from the Albert Bloch Foundation.” Bloch taught at the University from 1923 to 1947. He remained in Lawrence until his death.

Bloch is best remembered for his association with The Blue Rider, a Munich-based group of based artists. The Blue Rider group was integral to the Modernist movement of the 20th century, which was founded by Bloch, Wassily Kandinsky and Franz Marc, among others.

Members of The Blue Rider aimed to “usher in a new spiritual age” with their work, which was often characterized by “various degrees of simplification, of exaggeration, of bright colors and fractured faces.”

Bloch was the only American artist to exhibit with the group.

“Any art historian of modern art is going to be interested in an artist who was involved in the Blue Rider,” Cateforis said. "And then to have him end up in Lawrence, Kansas — where he spent the last four decades of his life — was this wonderful sort of link to the heroic years of European Modernism."

University student Libby Eggleston is a senior from Leawood studying visual arts. She recently started as a gallery monitor at the Lawrence Art Center. Her first week of work was mostly preparation for the Bloch show, which Eggleston says taught her a “huge amount” about Bloch and Lawrence.

“I knew a little bit about him, just with him being from Lawrence…but really just being around his paintings you learn so much about him because [Bloch’s art] is so varied,” she said. “He went through so many styles in his life. Even just going and seeing the exhibit, you learn so much about him and what he was interested in, and also kind of about Lawrence. I mean half of his work was done in Lawrence.”

Eggleston added: “I think it’s just awesome to see that if you are an artist you can do it anywhere and make a big impression on people."

Bloch was largely self-taught as a painter. He first job was as a newspaper illustrator and caricaturist in St. Louis. Cateforis said the stylistic elements of Bloch’s Modernist companions and elements of caricature are apparent in his work, especially in the early years when Bloch was “still finding his own voice.”

Bloch ended up with The Blue Rider after traveling to Germany in 1909 to study painting. He remained there during World War I with his family, registering as an enemy alien. Marc was killed during the war. The loss devastated Bloch, who likely drew from the experience to create his later, more “somber” work. He returned to the United States in 1921.

"There are two sides to [Bloch's] art: one is a more sort of somber, dark side, and the other is complex, sort of luminous, spiritually vibrant side. So you can think of poles of mourning and ecstasy," Cateforis said.

The curator said he believes works made in the '40s and '50s were Bloch's “most original and powerful work.”

However, Cateforis said he was not aware of Bloch when he first came to the University in 1992, until another professor, who was conducting a research project on Bloch, approached him. The researchers discovered that Bloch’s widow Anna still lived in Lawrence in the house Bloch occupied until his death in 1961, located on Alabama St. Bloch's wife died last year at age 101.

Bloch used the attic in his home as a studio and many of his paintings and prints remained there until Cateforis and the rest of the researchers found them. They were restored with Scott Heffley's help, who is a conservator at the Nelson-Atkins Museum in Kansas City.

Since then, Cateforis has written and edited collections of essays on Bloch. He also assisted the Nelson-Atkins when they presented a similar exhibition in 1997. In subsequent years, however, he said he hasn't been as active in Bloch research. This exhibition is both a culmination of Cateforis’ studies and an opportunity to resume those studies.

“[‘Themes and Variations’] is a chance for those of us, who know the work from having seen it in Anna’s house, to sort of share with the wider public--these certain aspects of Bloch’s work that haven’t been visible,” Cateforis said.

He added: “It’s always special and important to be able to see a lot of work from an artist from different phases of his or her career, because typically when you go to a museum, you’re going to see two or three things at most. So that’s always…sufficient justification to do a show like this.”

Cateforis also took an original approach to curating Bloch's artworks. He said he organized Albert Bloch's paintings by theme — such as theatre or landscapes — instead of by year for viewers to "really see each artwork." The exhibit features works from Bloch, courtesy of the Albert Bloch Foundation, from around 1911 to 1959.

"You know the old saying; a picture is worth a thousand words," Cateforis said. "You can’t really describe his art globally, in a way that encompasses the entirety of his career."

Bloch has a large legacy and Eggleston said she believes even those unfamiliar with Bloch or the Modernist movement can find value in the exhibition.

“He went through so many different styles in his art throughout his life, so there’s something in there for everyone,” she said. "If you aren’t interested in Expressionist paintings that he’s done or the painting that he did with the Blue Rider group, there’s more of his recent stuff that’s just so different from everything he did in his earlier years.

"I just feel like if you go, there’s something that can appeal to everyone. You can relate to at least one of his paintings no matter what.”

The exhibit is on display at the Lawrence Arts Center until Jan 2.