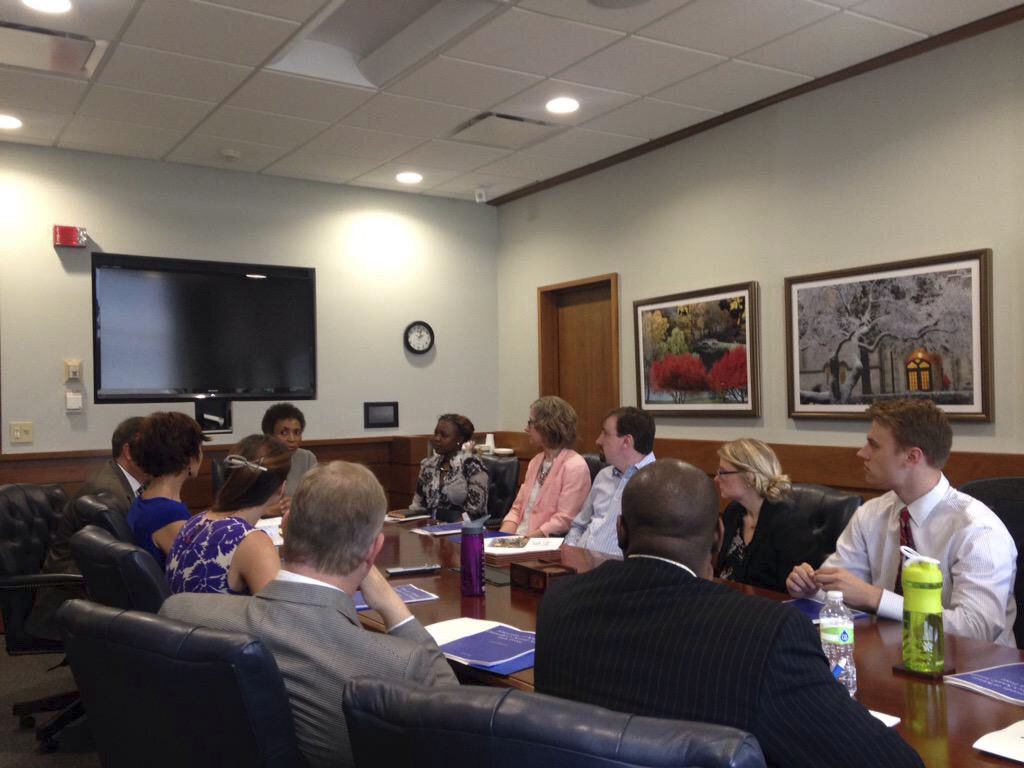 Members of the Chancellor's Sexual Assault Task Force presented their recommendations to the Chancellor and Provost on Friday afternoon.

Chancellor Bernadette Gray-Little listens to input from other members of the Chancellor's Task Force on Sexual Assault on May 3.

Members of the Chancellor's Sexual Assault Task Force presented their recommendations to the Chancellor and Provost on Friday afternoon.

Chancellor Bernadette Gray-Little listens to input from other members of the Chancellor's Task Force on Sexual Assault on May 3.

Developing an on-campus sexual assault response team and a center for prevention and education were among top recommendations presented by the Chancellor’s Sexual Assault Task Force to the Chancellor and Provost on Friday afternoon.

The task force of 11 students, staff and faculty members has been reviewing the University’s current processes, procedures and policies since September, when Chancellor Bernadette Gray-Little created the task force.

Gray-Little thanked the task force for the many hours of work and thought they put into the recommendations and said they will all be taken into consideration.

“It’s not something that we would solve next year or the year after and then it’s not an issue,” Gray-Little said.

The recommendations are divided into four sections: policy and process improvement; prevention and practices; support and advocacy for student victims of crime; and evaluation of the Code of Student Rights and Responsibilities.

Other specific recommendations noted as priorities by the task force include clearly outlining procedures for filing complaints and making that information more visible, as well as implementing multiple prevention programs for first year students and requiring first year students to live in campus housing, but excluding fraternity and sorority houses until sophomore year. Sorority houses already implement the deferral rule, according to the report.

The full report is online at sataskforce.ku.edu.

During the presentation, Gray-Little and Provost Jeffrey Vitter both asked questions, such as how alcohol impacted the task force’s recommendations, other risk factors that play a part in sexual violence besides alcohol and what the members of the task force team learned that might not be in the report.

Alesha Doan, the task force’s co-chair and department chair of Women, Gender and Sexuality Studies, said although alcohol’s impact is reflected in the recommendations, the team was careful not to go too far down the alcohol road because getting rid of alcohol doesn’t solve the issue. Doan said there is correlation, but not necessarily causation.

Several members of the task force mentioned other factors that play a role in sexual violence, such as gender, age and involvement in social circles such as sororities and fraternities.

Currently transfer students are evaluated on based on ACT scores and GPA, Gray-Little said.

Overall, Doan said she feels the report reflects not only the research the task force looked at, but also the hundreds of people they talked to on campus.

Doan said the task force had lots of support, encouragement and advice from the University community members who wanted to see the University become stronger.

The task force and administrators agreed that whether the recommendations are changes for the short-term or long-term, they require on-going action.

“It’s not just about protecting the University; it’s not necessarily just about protecting the students — it’s about the fabric of our community and creating meaningful social change in our community and tracking that progress for the next five, 10 and 15 years,” said task force co-chair Angela Murphy, a graduate student in the English department.