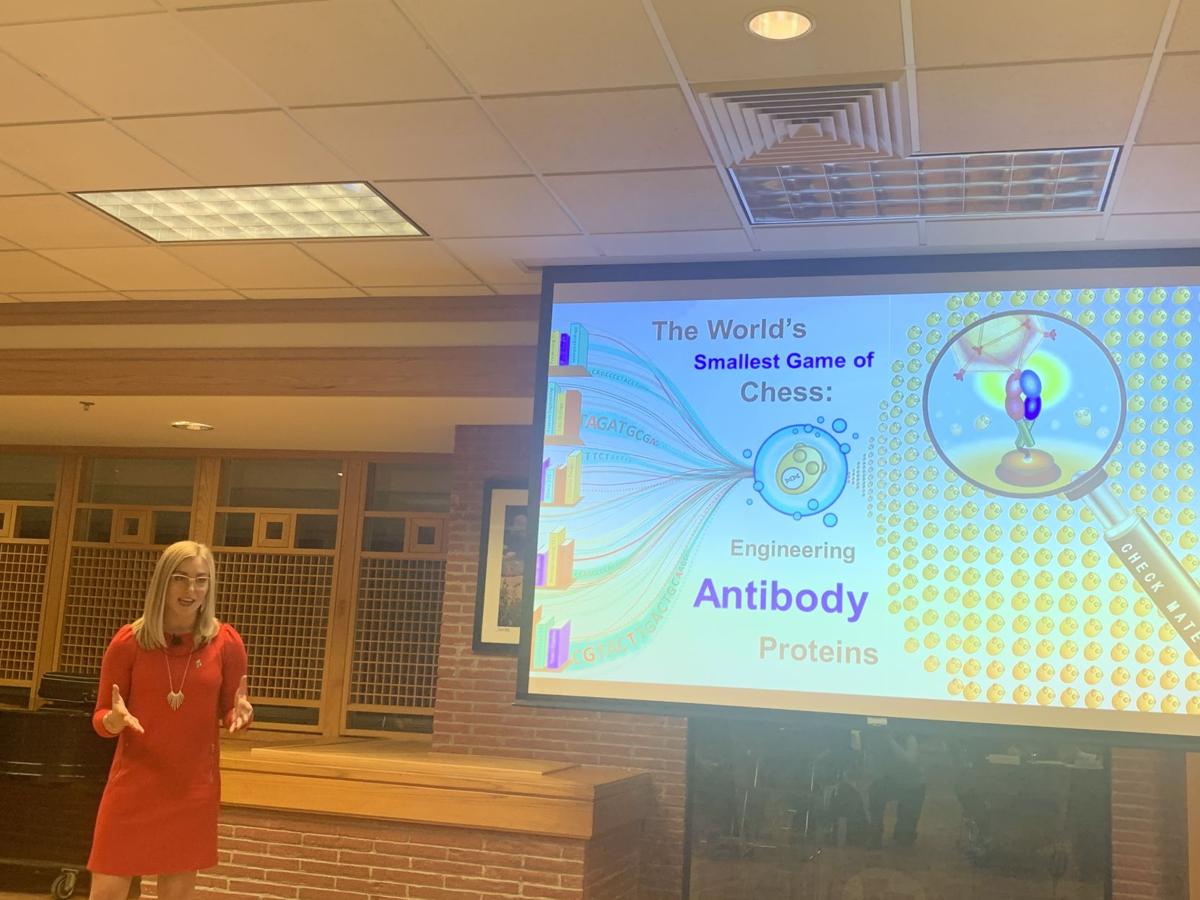 Bailey Banach, a doctoral student in bioengineering, explains her research on engineering antibody proteins by comparing it to chess. Banach was the overall winner of the Three Minute Thesis Competition Tuesday, Nov. 5. 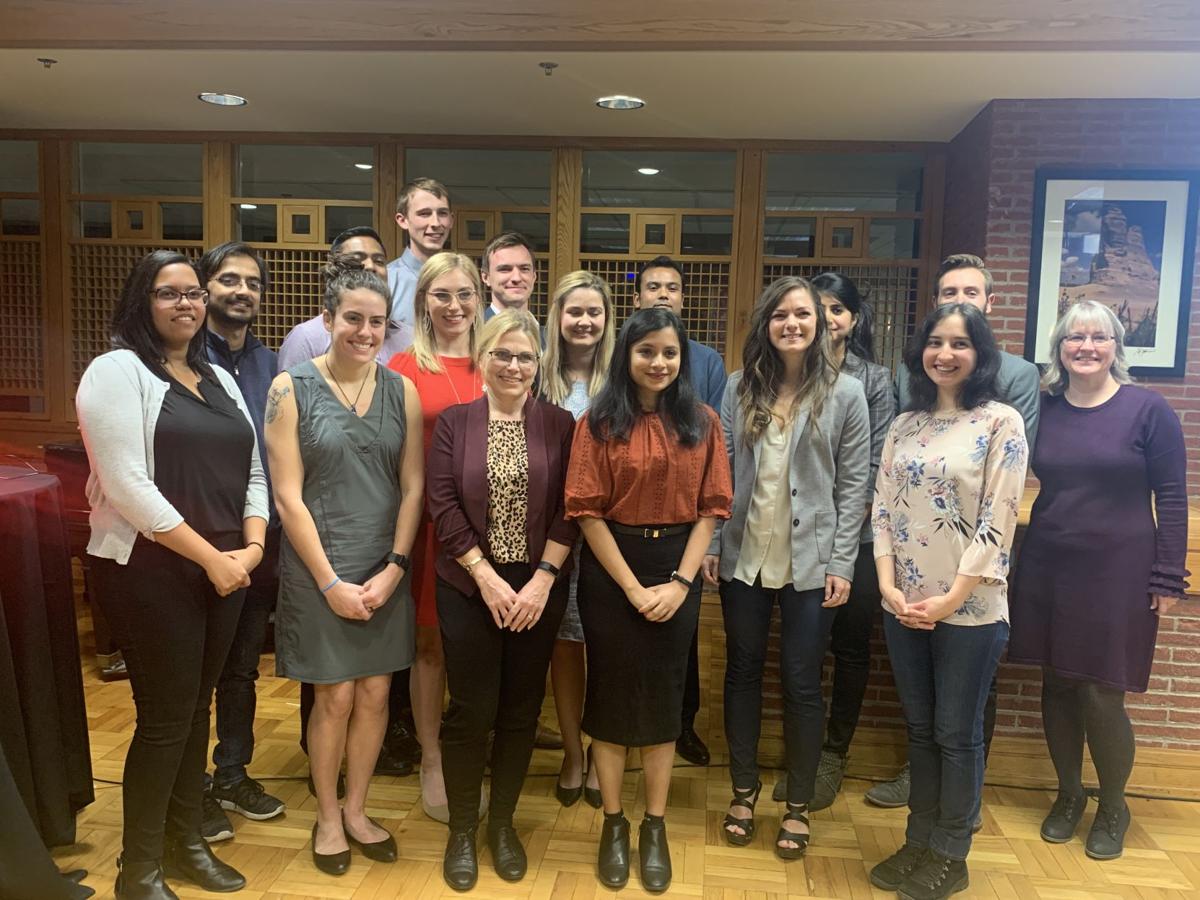 All 15 competitors in the Three Minute Thesis Competition Tuesday night pose for a photo. This was the Office of Graduate Studies’ second time hosting 3MT, an academic research communication competition developed by the University of Queensland in Australia.

Bailey Banach, a doctoral student in bioengineering, explains her research on engineering antibody proteins by comparing it to chess. Banach was the overall winner of the Three Minute Thesis Competition Tuesday, Nov. 5.

All 15 competitors in the Three Minute Thesis Competition Tuesday night pose for a photo. This was the Office of Graduate Studies’ second time hosting 3MT, an academic research communication competition developed by the University of Queensland in Australia.

“It’s a really interesting event because what it does is it gives graduate students the opportunity to talk about their research,” said Ayestas, who helped organize the contest. “You get to learn about what they’re doing without the technical jargon.”

3MT is now completed in over 600 universities and institutions across 65 countries worldwide, said Audrey Lamb, interim dean of Graduate Studies.

The competition took place in the Kansas Room of the Kansas Memorial Union and was co-sponsored by the Office of Graduate Studies, Sigma XI and 3MT.

A panel of four judges from the Lawrence community with experience in law, business leadership and more judged the students’ presentations based on comprehension, content, engagement and communication.

Bailey Banach, a doctoral student in bioengineering, accumulated the highest score from the judges and took first place. In addition to a $500 award, Banach will also represent the University at the Midwestern Association of Graduate Schools (MAGS) 3MT Competition from April 1 to 3, 2020, in Milwaukee.

In her presentation, Banach spoke about her research on engineering antibody proteins to make them more potent neutralizers of infectious agents without drug resistance.

Banach said she has been using platform technology to develop drugs against HIV, which she said is the most drug-resistant virus known to mankind.

Banach explained her research by comparing it to the game of chess.

“In total, my hope is that this research is able to define game-changing immune defense strategies that would be as effective as the Sicilian Defense move is in the game of chess,” Banach said in her presentation. “Ultimately, this research serves to usher in a new age of preventive medicine that will act as the ultimate checkmate in the fight against drug resistance.”

Shivani Jagannathan Murali, a doctoral student in molecular, cellular and developmental biology, took second place in the competition and a cash prize of $250.

Murali’s research focuses on determining what causes bone cancer and how to find its cure. When thinking about cures, Murali referred to a scene in Harry Potter, when Harry took a potion to grow back his bones after he lost them in a game of Quidditch.

“Harry Potter was lucky to have magic in his hands, but all I can do is look under the microscope and hope for some sort of magic to unravel,” Murali said. “After all, hope turns faith into reality.”

Murali said she was inspired to research cancer after working in a research institute during her time growing up in India.

“There were kids who were healing from cancer,” Murali said. “I used to be really frustrated from my problems, and when I used to go to this cancer institute, everything used to just fade away because sometimes my problems just seemed like nothing when I looked at kids so happy and they knew they had cancer.”

The audience also had a chance to choose a winner through online and paper voting.

The People’s Choice Award and $125 cash prize went to Kyle Apley, a doctoral student in pharmaceutical chemistry, whose research seeks to halt rogue immune responses, which prevent the body from fighting infectious diseases.

“My work specifically focuses on building these offensive molecule complexes so we may learn how they interact with immune cells and what mechanism causes them to calm down,” Apley said. “Knowledge gained from my research will better enable us to identify those conditions and may one day lead towards better treatments for autoimmune disease.”