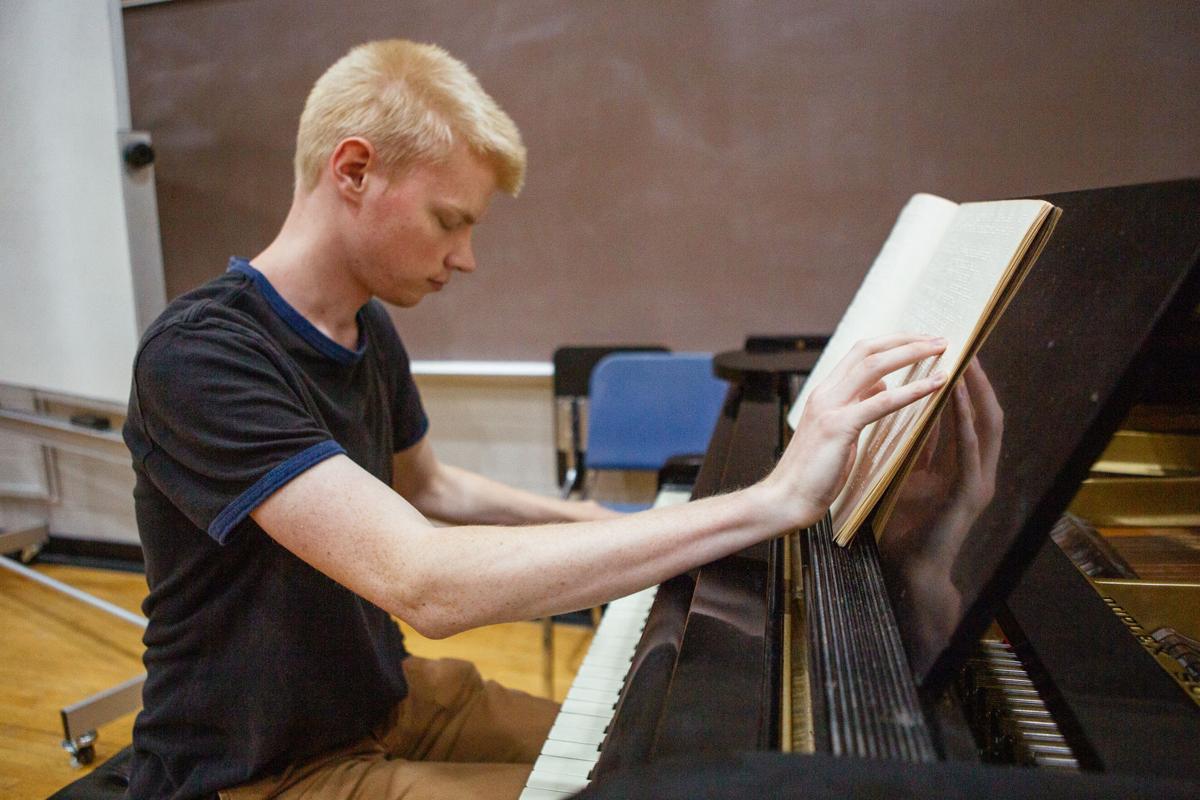 Sophomore Luther Fuller reads braille music with one hand while reciting with the other. Fuller has been blind since infancy and has been taking piano lessons since age six. 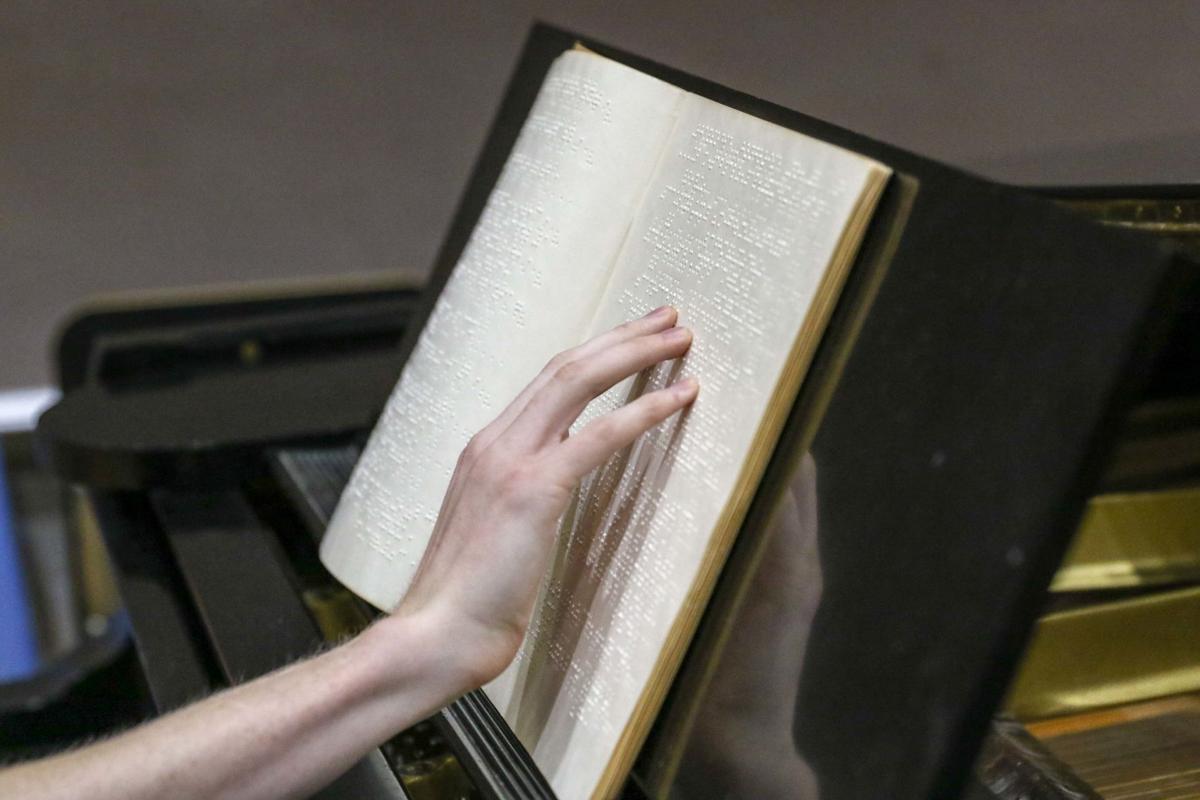 Sophomore Luther Fuller reads braille while he learns the piece to play on the piano as he is a blind pianist here at KU. Fuller is a piano performance major that has been taking lessons since he was six years old.

KU sophomore Luther Fuller is an award-winning pianist from Lawrence. He has been blind since infancy due to a genetic condition.

Luther Fuller can’t see the music notes, but he can feel them.

In his practice room on the fifth floor of Murphy Hall, he glides his hand across the dots on the pages of his braille music and plays what he reads on the piano with his right hand.

Fuller memorizes as he learns and repeats the process with his other hand, until he eventually pieces together the melodies to music, such as Beethoven’s Waldstein Sonata, Bach’s Concerto No. 1 and more.

“I want to create something meaningful that I really enjoy, that resonates with me and that I think will resonate with other people,” Fuller said.

Fuller, a sophomore piano performance major, has been blind since infancy due to a genetic condition. His lack of vision, however, didn’t stop him from learning how to play the piano or from winning the Kansas Music Teachers Association’s piano competition in 2012, 2015 and 2016, and the Midwest Chamber Ensemble Concerto Competition in 2016.

Fuller, a Lawrence native, started playing at an early age after his family noticed him making music with various items he found around the house, including his sister’s toy piano.

Soon after, 6-year-old Fuller began taking piano lessons from Jean Drumm, a Lawrence piano teacher. Drumm, who specializes in the Suzuki Method — a technique that teaches students how to play instruments by ear — had Fuller learn to play by listening and imitating the music on a CD.

“Those of us that teach the Suzuki method, we believe that all children are gifted — that everyone can learn,” Drumm said. “But, the ones that are especially good are the ones that learn very quickly. That’s why I knew [Luther] was more talented than usual because of the speed at which he accomplished everything.”

Fuller started working with associate piano professor Michael Kirkendoll three years ago when he was a junior in high school. Although Kirkendoll does not read braille music, he follows along with Fuller’s music using his own scores.

“It is a very fun and educational experience for me to teach someone who learns differently than I do,” Kirkendoll said in an email to the Kansan. “Luther learns very quickly and has a deep understanding of the music he is playing.”

Outside of class, Fuller’s practice time varies, but usually, he’ll practice for two hours a day, he said.

“The enjoyable part is having it learned, and once I start getting comfortable with what I’m playing, and I can get through it without stumbling much and then I can speed up,” Fuller said.

Fuller gets most of his music free of charge from the Library of Congress in Washington, D.C. The braille on his sheet music is written linearly to the right, just as text would be.

Beyond his next competition, Fuller said he is interested in composing. In particular, he hopes to one day compose music and possibly lyrics for the National Federation of the Blind, the oldest and largest nationwide organization of blind Americans.

Fuller’s mother, Brendy Latare, who encouraged him to take lessons and has been proud to see his growth, said there is more to Fuller than his experience as a blind musician.

“The kind of obvious thing about him is he’s a music school student, and he’s blind. But the other less obvious things about him are that he's really funny, and he wants to have conversations about any number of wide-ranging topics,” Latare said. “[His blindness is] only one very small part of who he is.”

Continuing music did not come without challenges for Fuller. Fuller said that as a teenager, he moved away from music and closer to the technology field when he realized how much of a role it was playing in his life.

But he always found himself coming back to music.

“There’s a kind of ineffable beauty in that for me,” Fuller said. “It’s the complexity and the result of it that can just remind me that there exists some beauty somewhere.”

Sophomore Derek Dunn, a KU student senator, spends his days in meetings. But on Thursday nights, you can find him at the Jazzhaus in downtown Lawrence.