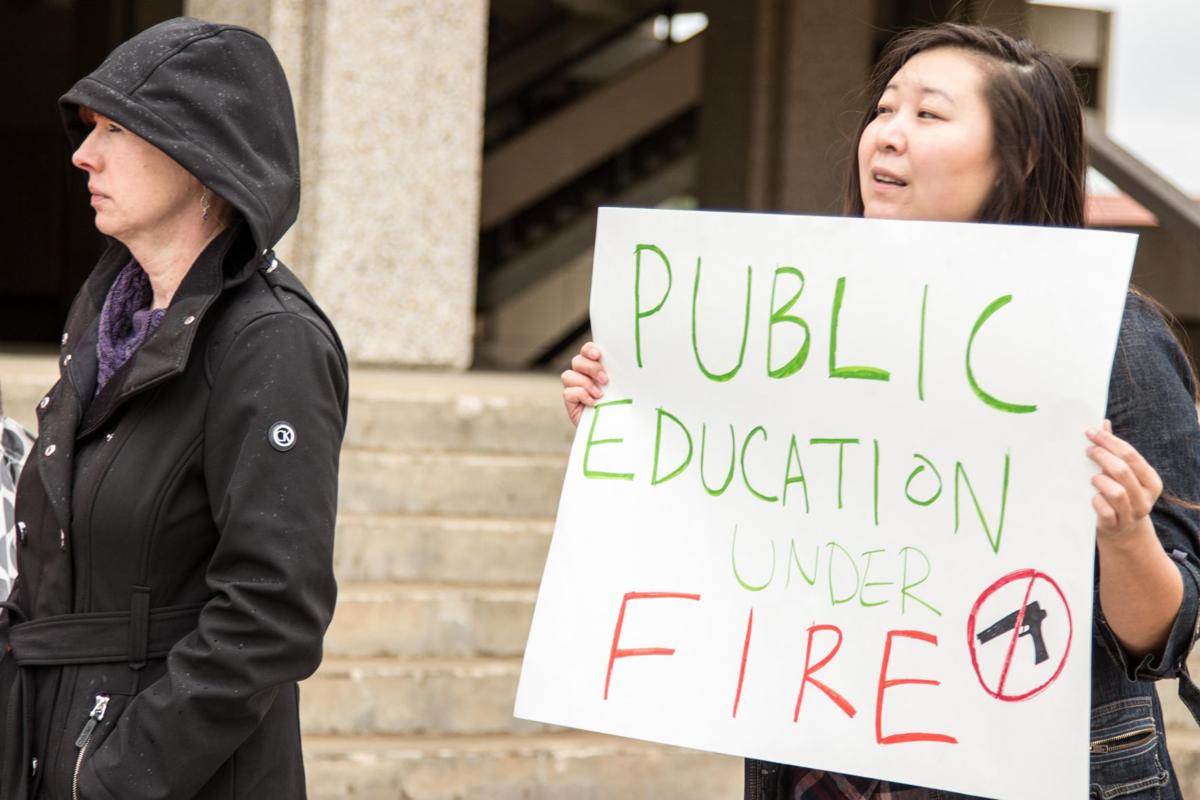 A sign stating, 'Public education under fire' is held during the protest on April 4. The protest is about the conceal and carry rule going into effect on July 1, 2017. 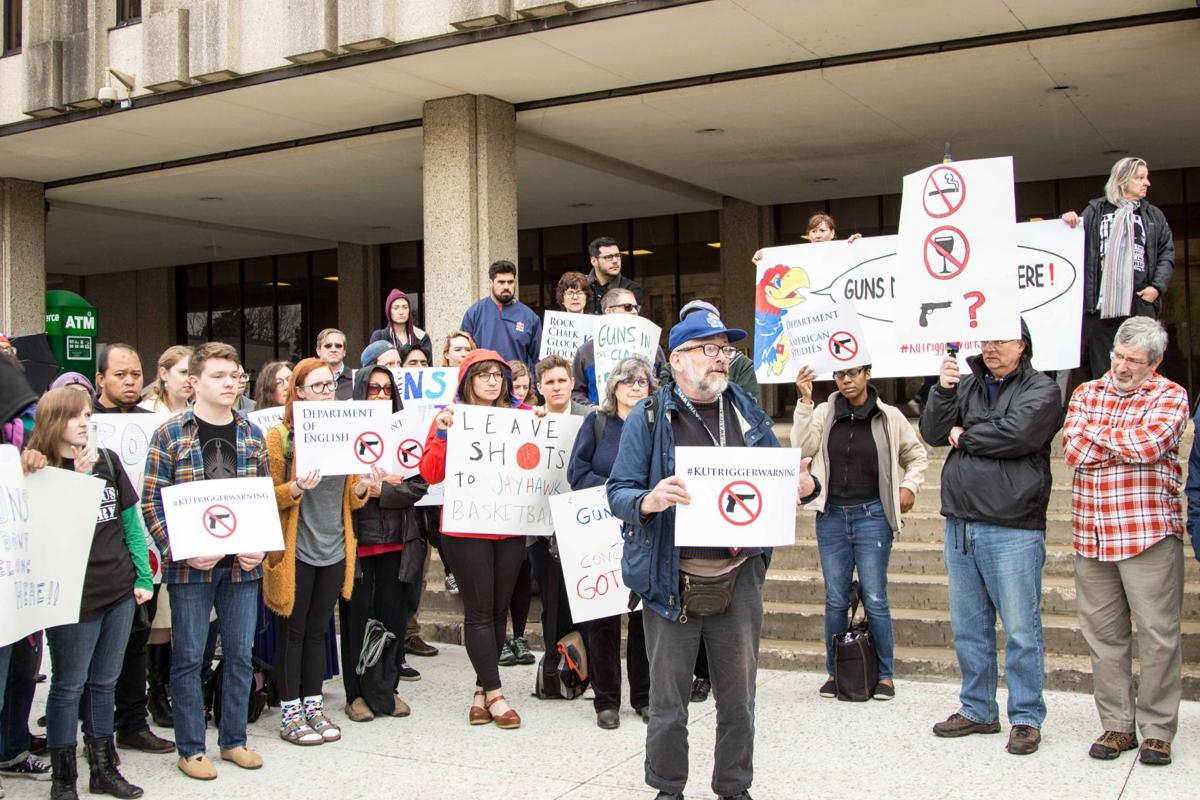 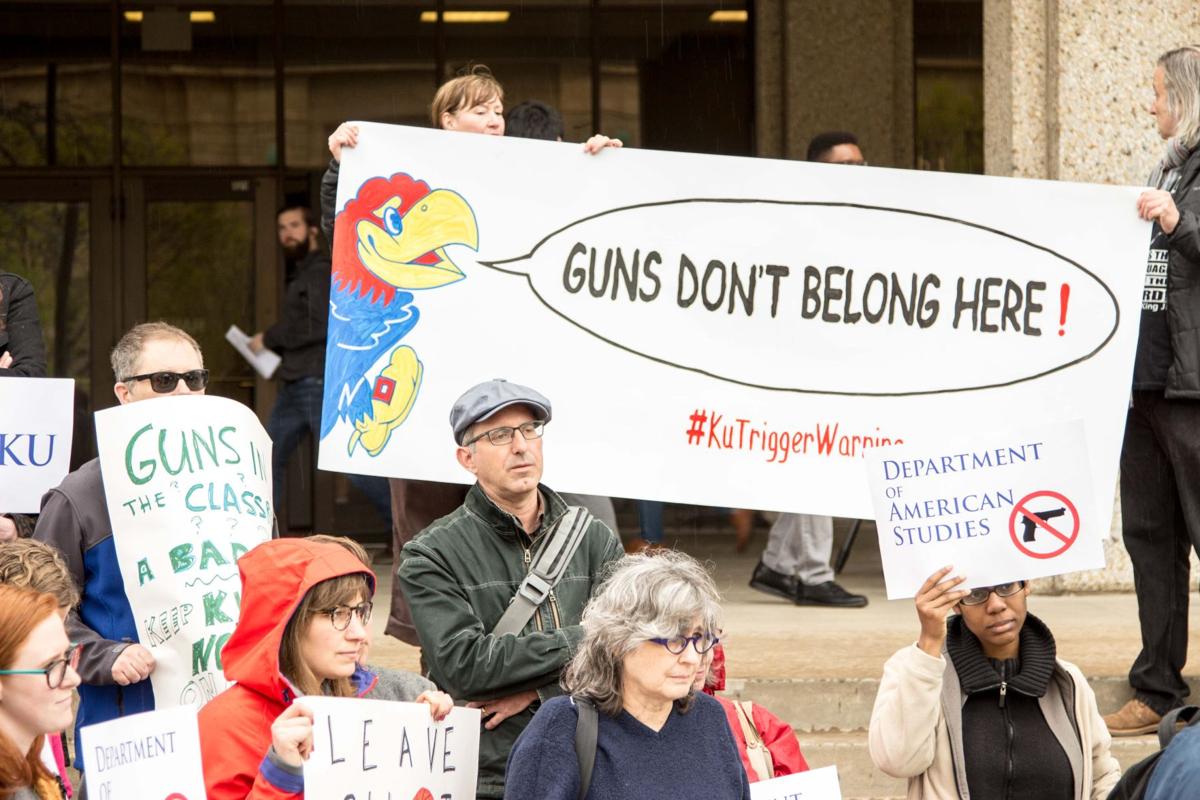 A crowd gathers on Wescoe beach to protest the conceal and carry rule going into effect on July 1, 2017. Sign being held stating, "Guns don't belong here!" is held during the protest against having guns on campus. 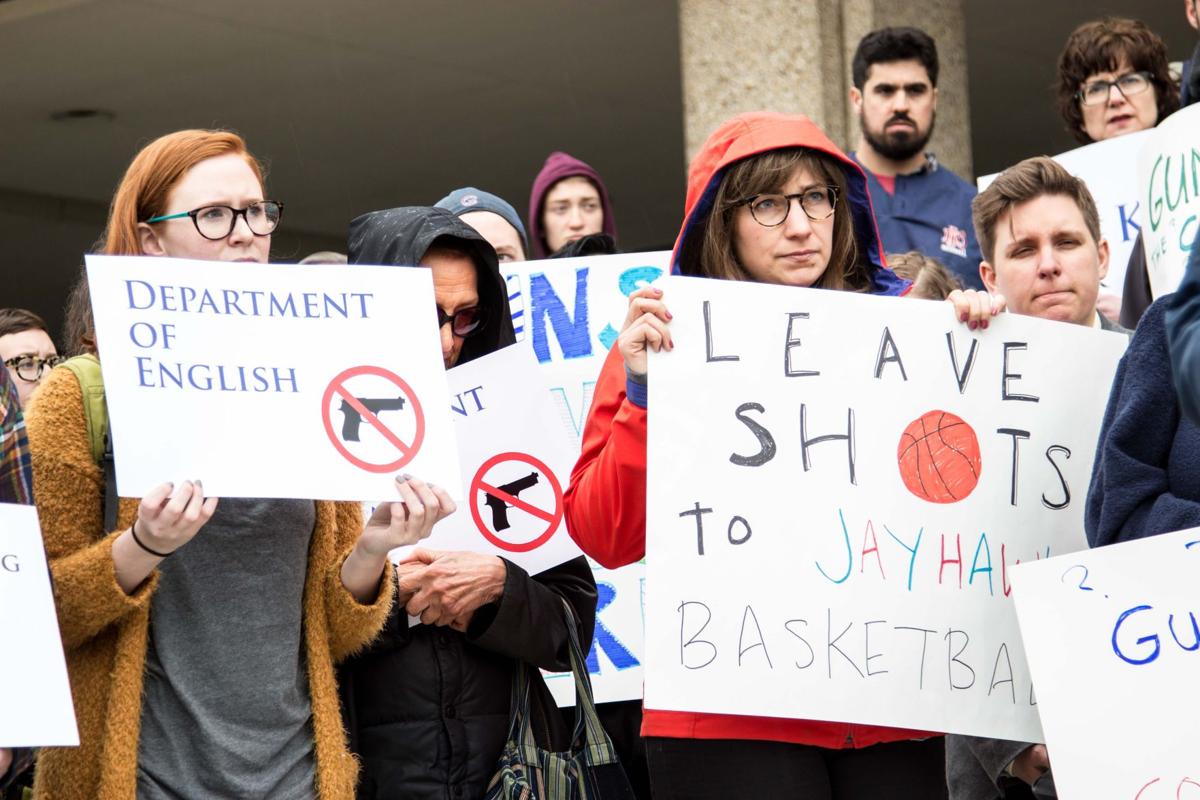 A crowd gathers on Wescoe beach to protest the conceal and carry rule going into effect on July 1, 2017

Though a majority of students, staff and faculty at Kansas’ six public universities oppose concealed carry on college campuses, guns are coming to campus as a result of pressure from Kansans themselves in addition to, as some believe, pressure from gun lobbyists.

In 2013, the Kansas State Legislature passed the Personal and Family Protection Act, which allows licensed gun owners over the age of 21 (59 percent of undergraduate students at the University’s Lawrence and Edwards campuses are younger than 21) to bring guns into state and municipal buildings. However, public colleges, universities and hospitals were given a four-year exemption to the law, which will expire this summer.

As of Feb. 27, all six of Kansas’ state universities have faculty governing bodies that formally oppose campus carry (Pittsburg State University was the last to do so), and according to the January Docking survey, 70 percent of faculty statewide oppose concealed carry on campuses outright. The University’s Faculty Senate formally declared its opposition to campus carry in a resolution in December 2016.

As a result of the diverse views of students and employees across the state, universities have asked for local control from the state legislature, meaning that each university would be able to craft its own weapons policies to fit its unique situation.

In its December 2016 resolution, the University’s faculty senate asked the legislature to continue the exemption for colleges and universities or, “to allow our campus communities to choose whether or not weapons are allowed on our KU campuses.”

The Legislature has taken no such action, to the chagrin of many across the state and the University. Yet, in the last few months alone, the University has seen a great deal of anti-gun activity as a result of the impending expiration of the exemption.

Despite the momentous efforts of University students, employees and community members, the legislature refuses to allow colleges and universities to choose their own campus carry policies, despite the fact that a majority of college employees and students oppose campus carry.

Ron Barrett-Gonzalez, a professor of aerospace engineering, president of the Kansas Chapter of the American Association of University Professors and an expert in various weapons systems, believes this is because Kansas legislators listen more to gun manufacturers and lobbyists than Kansans in regard to gun policies.

“These people have been essentially bought off directly,” Barrett-Gonzalez said. “They have been personally enriched by, not necessarily even the gun lobby, but by the gun manufacturers.”

“I see behind this direct interlinking between corporate profits and the making of laws,” Barrett-Gonzalez said. “We are seeing a microcosm of that in the civilian-armaments complex. This is a mirror of the larger military-industrial complex that hits at the state level and has coupled its own corporate profits to changes in the legislature.”

“This industry is different because it deals in death,” Barrett-Gonzalez said. “The idea that a group of people are making money on machines that would injure, maim or kill faculty, staff and students, impede our academic freedom, drive people away from our institutions of higher education, reduce our national and international standards and harm the most important investment that the taxpayers of the state has ever made, it’s abhorrent to me and almost all faculty members.”

Representative John Whitmer (R-Wichita) is a member of the Kansas House and a University alumnus who supports concealed carry on college campuses. Whitmer said Republican support of the bill has nothing to do with the NRA or with the KSRA.

“I don’t think it really has anything to do with the NRA,” Whitmer said. “The citizens recognize that there’s a constitutional right. The majority of Kansans support Second Amendment rights and so the legislature reflected that. I think it’s strictly just a matter of the people of Kansas are pro-gun. We’re a pro-guns state, and they support Second Amendment rights. I think that’s what it comes down to.”

Whitmer said he understands the concerns of those who oppose campus carry but that he has a responsibility to his constituents.

Whitmer said that he believes much of the anti-gun rhetoric is a result of fear mongering.

“Some of it may be more emotional and more fear-based than based on logic or the factual data,” Whitmer said. “It’s an emotional issue, so I get that, but we’ve heard testimony from KU students who say that people are going to die and that there’s going to be mass shootings. The evidence doesn’t support that.”

“In the last 20 years, there have been 180 campuses that embraced campus carry,” Whitmer said. “There has not been a single incident of gun-related violence or gun-related suicide that can be attributed to the expansion of campus carry on campus.”

Additionally, Whitmer said he believes that the results of the surveys, such as the Docking surveys, are inaccurate as a result of fear tactics used by opponents of campus carry.

As July 1 approaches, the University will continue to inform faculty, staff, students and prospective students on campus carry policy. Campus carry information can be viewed on concealedcarry.ku.edu.

“There is a weapons policy taskforce,” Bennett said. “They help prepare our basic weapons policy that has now been approved by the Board of Regents. They are currently working on plans to inform people about the policy.”

Bennett said that 63 percent of KSU students, staff and faculty oppose campus carry. However, Bennett said there is less anti-gun activity at KSU than at the University.

“I don’t think it has been as active here as it has been at KU, but I’m not that familiar with what’s going on at KU,” Bennett said. “There’s certainly been people speaking out against it, there haven’t been open protests yet. I don’t think there will be, but I’m often surprised.”

This summer, Kansas will join Colorado, Texas, Arkansas, Utah, Mississippi, Wisconsin and Oregon as states where campus carry is legal.

However, with another election in 2018, many view the fight over campus carry laws as just beginning.

“We need to make those people who have so badly damaged the institutions of higher education across the state let them feel the pain,” Barrett-Gonzalez said. “And they should feel the pain at the polls. We will do our damndest to convince everybody that they have cost the state jobs, they have weakened our educational institutions and they have threatened the lives of the students, staff and faculty of our state’s largest enterprise, and it’s not appropriate.”

However, Whitmer said that that efforts to repeal campus carry will not be successful.

“I think they’ll be those who still want it repealed, but I don’t think their efforts will be fruitful,” Whitmer said.

The upcoming campus carry policy has driven some professors to rethink the way they teach, including offering virtual versions of the classroom or temporarily not teaching classes at all.

Everything you need to know about guns on campus

Some frequently asked questions about concealed carry on campus.

Campus carry opponents plan to keep pushing, even with law in effect

For four years, dozens of faculty members, students, Lawrence residents and more fought against the inevitable: that guns would be allowed on …