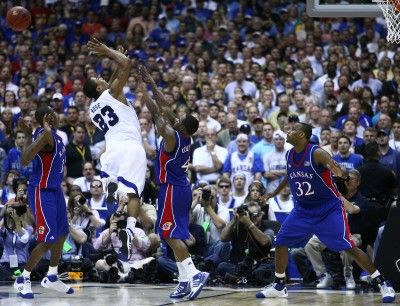 Then-sophomore guard Sherron Collins and then-junior guard Mario Chalmers knock the ball out of the hands of Memphis' Derrick Rose late in the second half of the 2008 national championship.

Then-junior guard Mario Chalmers shoots the three that tied the game to send it to overtime during the 2008 national championship game.

Coach Bill Self, the 2007-08 roster and Kansas men’s basketball fans got the chance to rejoice over their 2008 National Championship victory against the Memphis Tigers Sunday as CBS re-aired the game.

Self live-tweeted, providing insight and reflecting on major moments during the contest.

One of his main points was providing the strategy behind trying to defend then-freshman Memphis guard Derrick Rose.

It was a tall task as Rose averaged 21.4 points, 5.6 assists and 6.6 rebounds in the previous five NCAA tournament games leading up to his matchup with Kansas.

Self tweeted about how he had his team switch defensive strategies. The Jayhawks started with man-to-man defense then went to a triangle and two defense.

Self went with the defense, which combines the techniques of man-to-man and zone defense to combat Rose’s playmaking ability. However, Self quickly changed it after Memphis cracked the code.

As a result, Kansas went to a 1-2-2 zone to try and stop the standout freshman down the stretch.

Who says I never play zone? That’s why I never do.

Perhaps this was the Jayhawks' most effective defense because it was the last hand they could play in a time of desperation.

The strategy worked. The Tigers missed four consecutive free throws. Then-junior guard Chris Douglas-Roberts missed three of them, and Rose missed the other.

While this was going on, the Jayhawks scored on their next five possessions. Then-sophomore guard Sherron Collins stole an inbound pass, dished the ball to then-junior guard Mario Chalmers, who missed a layup.

However, then-senior guard Russell Robinson got it back and kicked it out to Collins who made a 3-pointer in the right corner. The shot cut the deficit to four with 1:48 left.

Self commended his team’s demeanor as it was making a comeback, saying Kansas had “no stooped shoulders”.

Ok from this point forward watch body language of our guys. It’s perfect. No stooped shoulders. No pointing fingers. No head hung. Total maturity. Proudest moment of a coach.

Chalmers also chimed in, saying Robinson and Collins “played big down the stretch."

Collins and Chalmers capped the 12-3 run to end regulation with one of the most legendary shots in basketball history.

Collins stumbled on his way to hand the ball off to Chalmers who made a 3-pointer from the right wing to tie the game at 63 with 2.1 seconds left.

Self said the shot was “unreal,” given the fact Kansas only made one 3-pointer in the first 38 minutes of the game.

The Jayhawks went on to score the first six points of overtime and outscored Memphis 12-5 in the extra period to win the National Championship.

As the re-air wound down, Self praised his team and staff for their accomplishments.

What a game. What a team what a group of individuals. They spoiled us. What a privilege to be their coach. Joe Kurtis Danny Ronnie Mike Lee, what a staff. Thanks for giving me the ride of my life. Love you all.