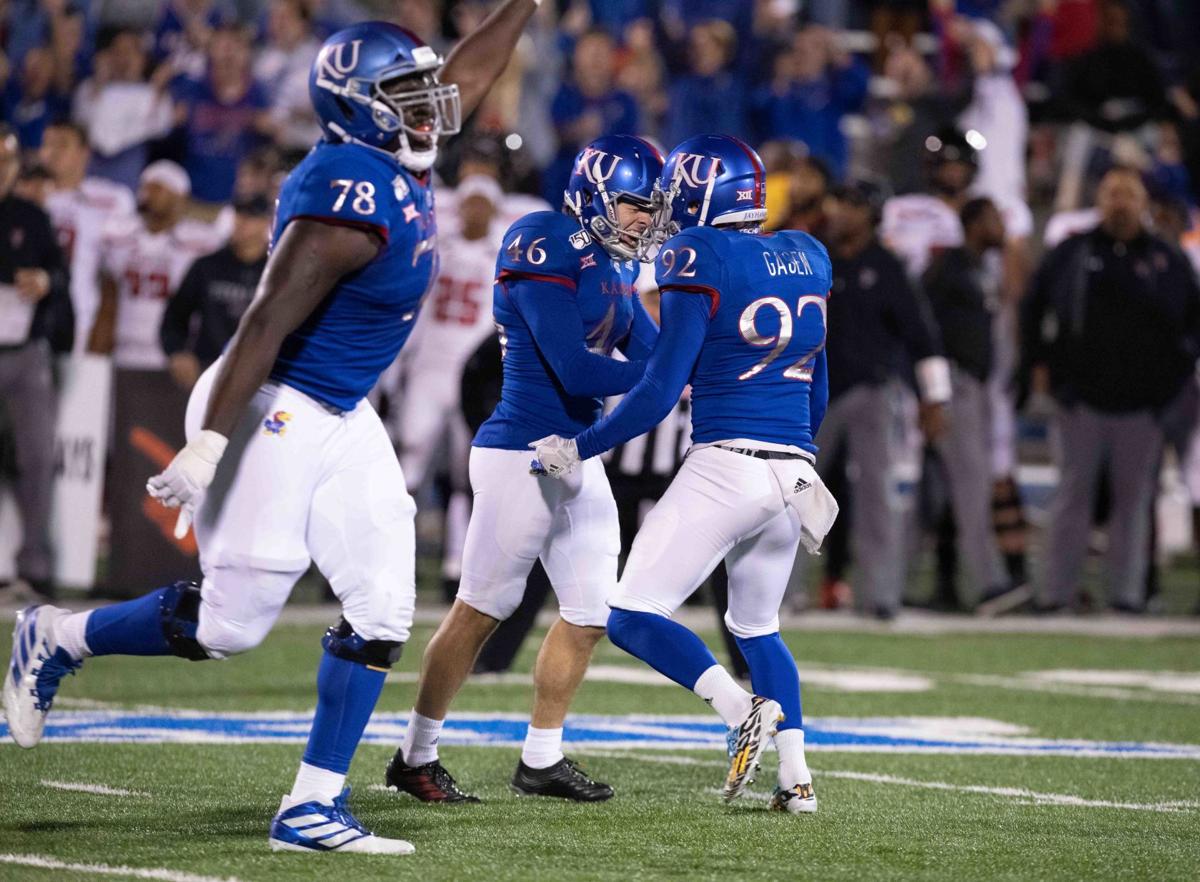 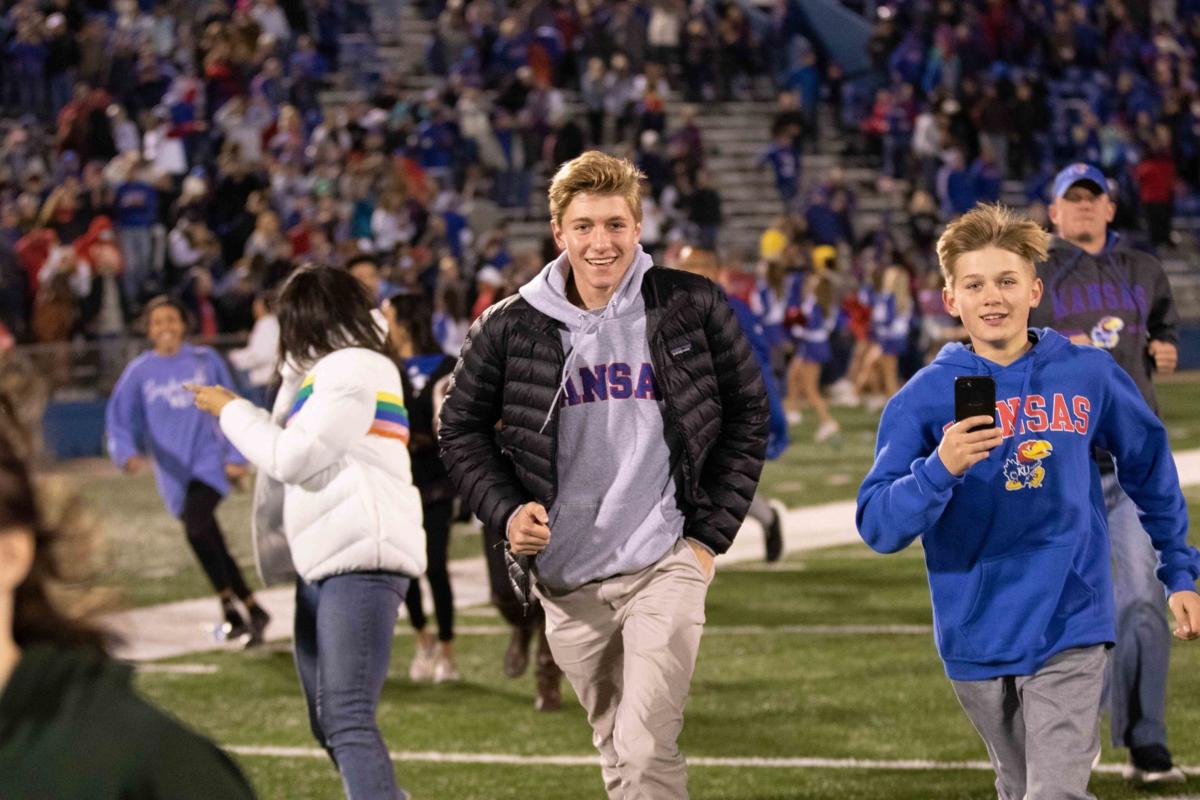 Kansas fans run out onto the field after the Jayhawks' 37-34 victory over Texas Tech Saturday, Oct. 26.

After storming back from a 17-0 deficit, Kansas football found itself in a tie game deadlocked at 34-34 with only 13 seconds left on the scoreboard. It all came down to this: a 40-yard field goal attempt from junior kicker Liam Jones.

Kansas’ field goal unit had been struggling mightily the last couple week. Against Texas, Jones had a kick blocked and taken back for two points, which ended up being the difference in the game. Texas Tech also blocked another one on a point after attempt.

When the holder caught the ball, Kansas felt an all too familiar result coming. Texas Tech had blocked another field goal, and this time Texas Tech senior defensive back Douglas Coleman III fielded the ball with a bunch of green grass in front of him. When he eventually was swarmed by a flock of Jayhawks, Coleman did the inexplicable, pitching the ball backwards with no teammates behind him.

When that happened, redshirt junior long snapper Logan Klusman took off in a dead sprint and dove on the ball. After the game, Klusman said he had no idea what Coleman was thinking.

“I thought he was going to at least try and run it out of bounds to kill it and go to OT, but instead I guess he was trying to make some superhero toss-back play, and he ended up giving it to us,” Klusman said.

After Kansas recovered the ball, head coach Les Miles said in his post-game press conference that the play shocked him, but he knew exactly what to do next.

“I thought, basically they wanted to score really bad," Miles said. "I knew that when the ball hit the ground, a timeout had to be the next thing [to do].”

Kansas football brought a storm of energy in the second half of its Saturday night homecoming game to defeat Texas Tech 37-34. The Jayhawks took the game on a field goal in the last two seconds.

Jones said he tried his best to calm himself down and knew he had to capitalize with his teammates depending on him.

“I didn’t really have a choice but to flush that out, and then I was given another opportunity," Jones said. "I had to take advantage of it.”

During the timeout, Miles walked over to the usually stone-faced and focused Jones and told him he would only allow him to kick the ball under one condition.

After recovering the fumble, Klusman said he was so excited he needed a moment to settle down. He said he hadn’t recovered a fumble in a game since his senior year of high school and had just made, potentially, the most important play of the game.

“I looked at the clock — there was one second left. I was like, ‘Alright, I've got to refocus,'" Klusman said. "I literally tossed the ball back to the umpire. I got a good amount of time to refocus and get things right and got one more snap from the sideline, and we were ready to rock and roll for the next kick.”

With two seconds left in the game, Kansas had an opportunity to correct its mistake, this one from 32 yards out. Kansas’ whole sideline anxiously awaited as Jones lined up. Senior safety Mike Lee said he was so nervous he couldn’t even watch.

“When we kicked the field goal, I wasn’t paying attention. I was looking in the stands," Lee said. "My eyes were closed. All I heard were the fans screaming. Then I knew it went in."

Kansas had done it. The Jayhawks won their first homecoming game in the last 10 years. The kick went through, and all students in attendance poured onto the field at Memorial Stadium.

Klusman said after the game he got a “barrage of hugs” from his fellow Jayhawks. He, however, shed his love upon his kicker.

“I cannot be more proud of that guy over there,” Klusman said, pointing directly to Jones. “I am so happy for him and everyone as a whole, but especially Liam. The first thing I did when I got to the locker room, I walked in and told him I loved him and gave him a huge hug.”

In football, it is easy to forget about the special teams. Klusman said that as a unit, every specialist is just focused on doing one thing: their jobs.

“As a long snapper, [I] don’t get a whole lot of recognition, but to have something like this is something I’ll remember forever, and I’ll be able to tell, hopefully, my kids about,” Klusman said. “We get our praise during practice, but honestly our whole thing is to go unseen as specialists. I think us as a whole, it’s nice to get praise for a game or two, but we’re just trying to do our jobs and kind of keep our heads down."

From having last week’s special teams blunder result in a loss, to having a potential game-winning field goal blocked, and finally converting on a walk-off kick, Miles said the whole sequence was a wild ride.

“I can tell you this, that’s better than a ride at some amusement parks I’ve been at," Miles said.

Throughout the game, Kansas fans were both dialed in and loud.

“We’re definitely going to need that next week against K-State," Stanley said. "We’re going to need a packed stadium. It’s going to be a great game, and I’m fired up for it.”