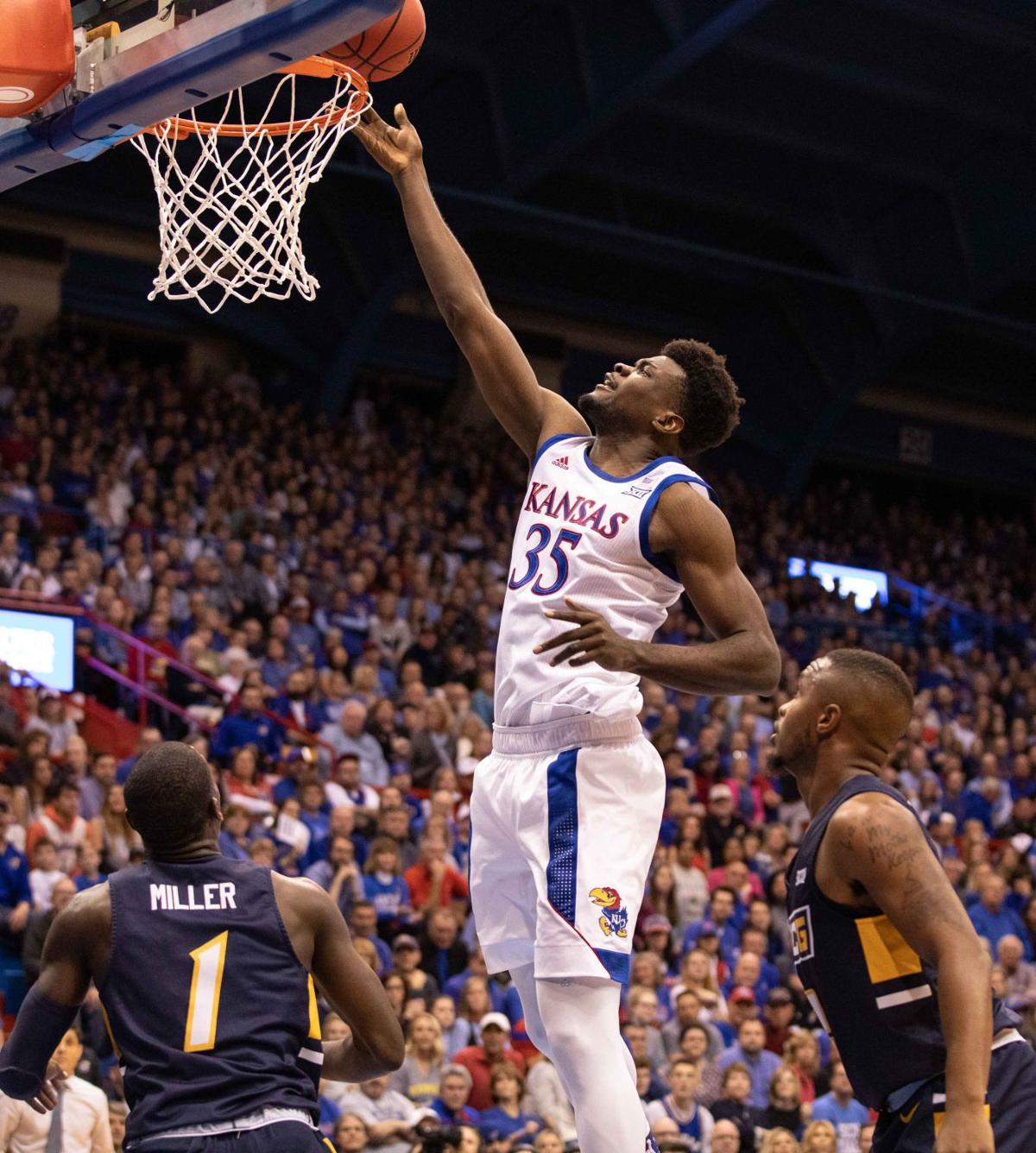 Senior center Udoka Azubuike lays the ball in the hoop against UNCG. The Jayhawks defeated the Spartans 74-62 Friday, Nov. 8. 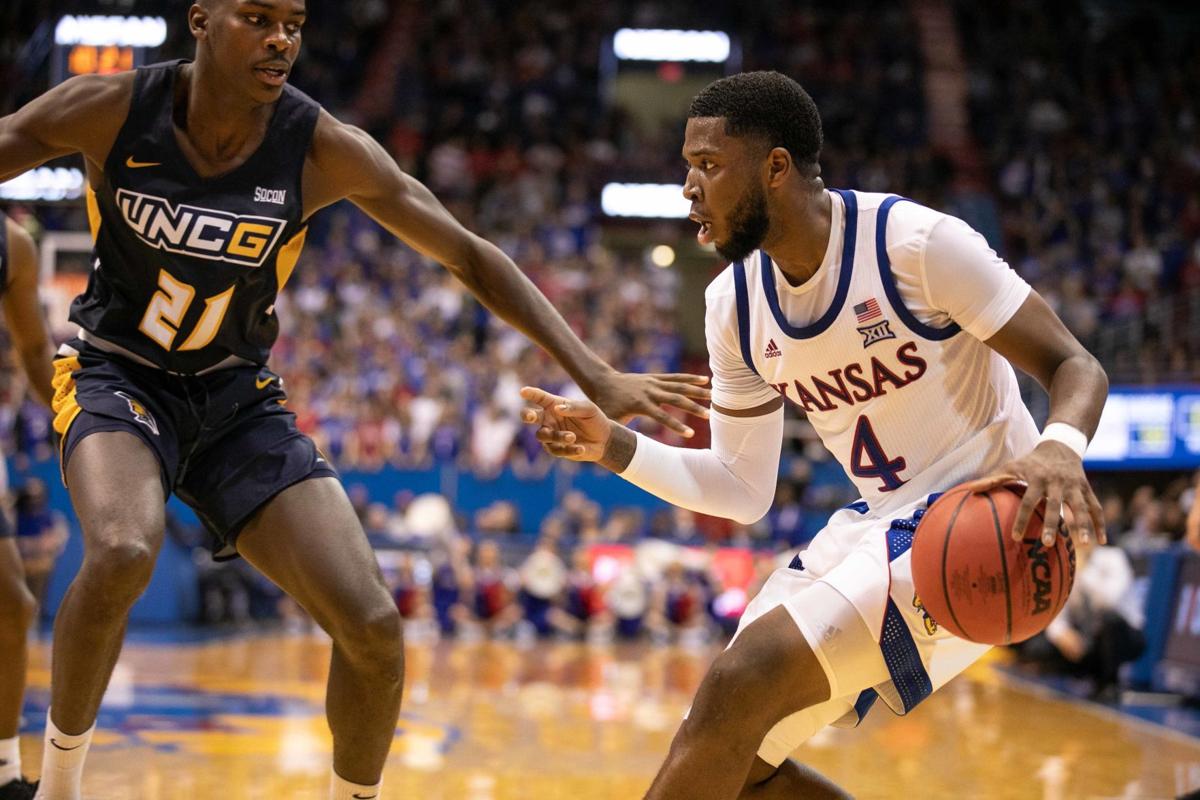 Senior center Udoka Azubuike lays the ball in the hoop against UNCG. The Jayhawks defeated the Spartans 74-62 Friday, Nov. 8.

On paper, possibly Kansas’ biggest advantage is the size and power it has in the front court. But, after a clunky display against Duke and the first couple minutes versus UNC Greensboro, the Jayhawks may be steering toward playing a four-guard lineup — the style Kansas has played for a vast majority of the past several years.

To start the game, coach Bill Self initially came out with the same lineup he played against Duke with senior center Udoka Azubuike and sophomore forward David McCormack both in the game — but this didn’t last very long at all.

The first player off the bench for Kansas was Iowa transfer and senior guard Isaiah Moss at the 15:32. From that point on, Kansas played strictly small ball.

For the remainder of the game, McCormack, Azubuike and junior forward Silvio De Sousa would all split time playing down low, with nothing but shooters around them.

This strategy proved to be effective for the Jayhawks as it gave them the ability to space the floor. In the first half, junior guard Marcus Garrett was able to knock down two open threes, thus forcing the Spartans to close out on him. When this happened, it also enabled Kansas’ post players to come free.

One player who thrived in this system was freshman forward Tristan Enaruna. Listed at 6-foot-8, the Netherlands native posses the length to defend forwards and also has the versatility to play at any of the four guard positions except point guard.

After the game, Enaruna said the four-guard style is one he enjoys both on the offensive and defensive end of the floor.

“One is [different] — you got to know how to run the plays and all that stuff, and that’s not really what I’m trying to do,” Enaruna said. “But two, three and four [guard] — I’m pretty comfortable at any [of those positions].”

To open the second half, Self elected to start Moss instead of McCormack, and the contest quickly became a game of "pick your poison" for UNC Greensboro: Either take your chances in a one-on-one matchup with Kansas’ plethora of powerful low block players — an almost certain two-point basket — or double-team the post allowing a shooter to come free.

Just before the nine-minute mark of the second half, Kansas caught UNC Greensboro’s sophomore guard Kaleb Hunter in a mismatch with its towering center. Enaruna then hit Azubuike with a clever pass, which he used to throw down an emphatic posterizing one-handed jam.

Azubuike said after the game he felt very comfortable being the only down-low threat in the game.

“The floor kind of spaced around. I got my teammates that can all shoot threes and that really [gave me more space],” Azubuike said. “With the two big rotation, it’s like sometimes the other big really clogs the lane for me.”

The Jayhawks’ change in philosophy also allowed them to make quick work of the Spartans’ press.

There was a sequence in the first half where sophomore guard Devon Dotson split the double team coming at half court and found freshman guard Christian Braun for the open three. Braun missed, but Dotson was able to get the offensive rebound and laid it in off the putback.

The effectiveness against the press became even more evident at 16:56 of the second half. Again, Dotson was able to blow right through UNC Greensboro’s press, this time finding sophomore guard Ochai Agbaji in the corner for a wide-open three.

“We thought we could take advantage of our shooting position when they had two bigs on the floor,” Miller said. “Offensively, we knew they had a huge interior advantage, obviously, when we were trying to guard them. When they went four guards, they matched up with us pretty well.”

Despite the effectiveness of the Jayhawks’ four-out, one-in strategy, Self said he still plans to eventually play with two bigs on the court, stating it is “too early” to abandon it.

“We’re going to play two bigs some, we will. There’ll be teams where we can do that, and that will be the best way for us to play defensively, but tonight wasn’t one of those nights," Self said.