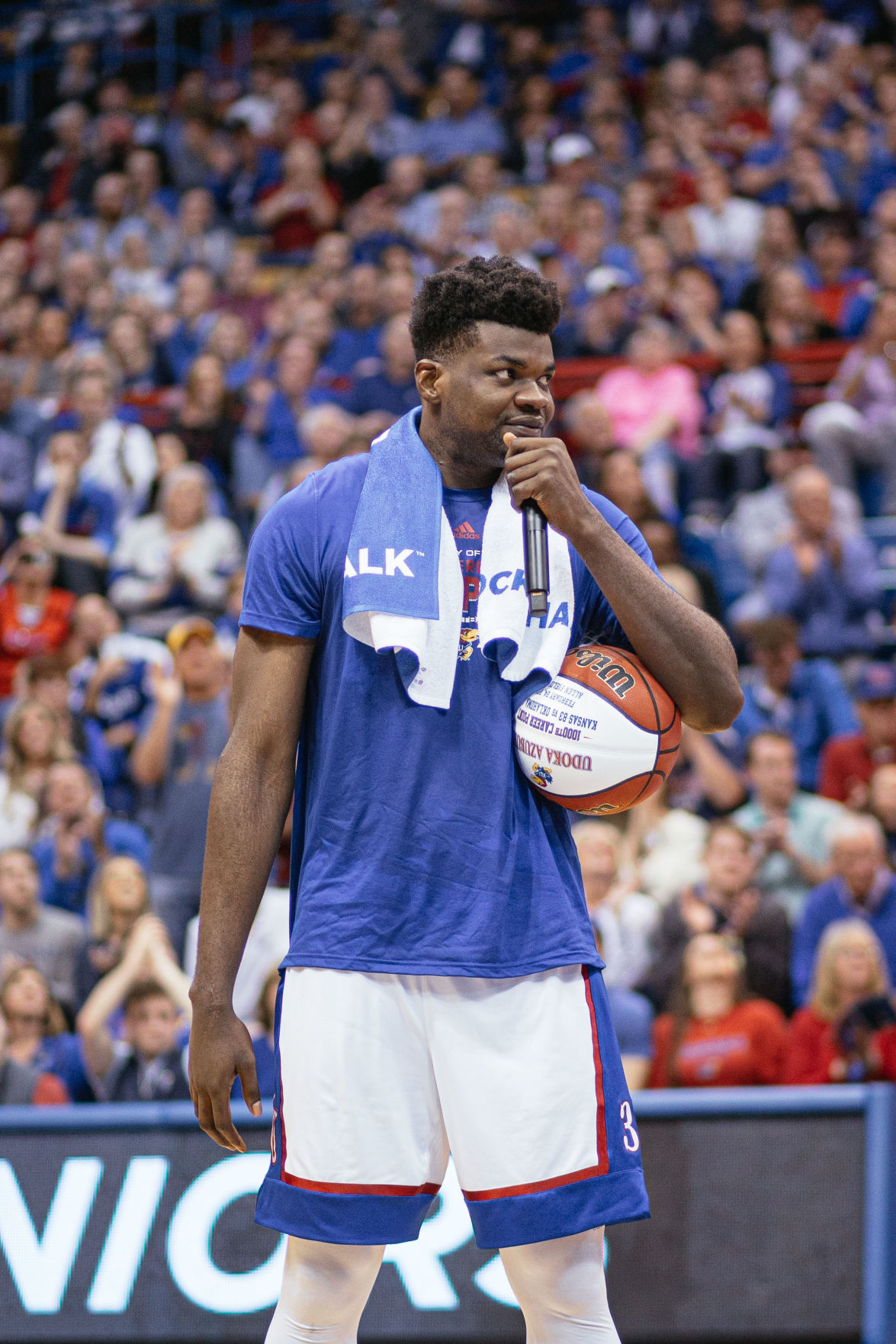 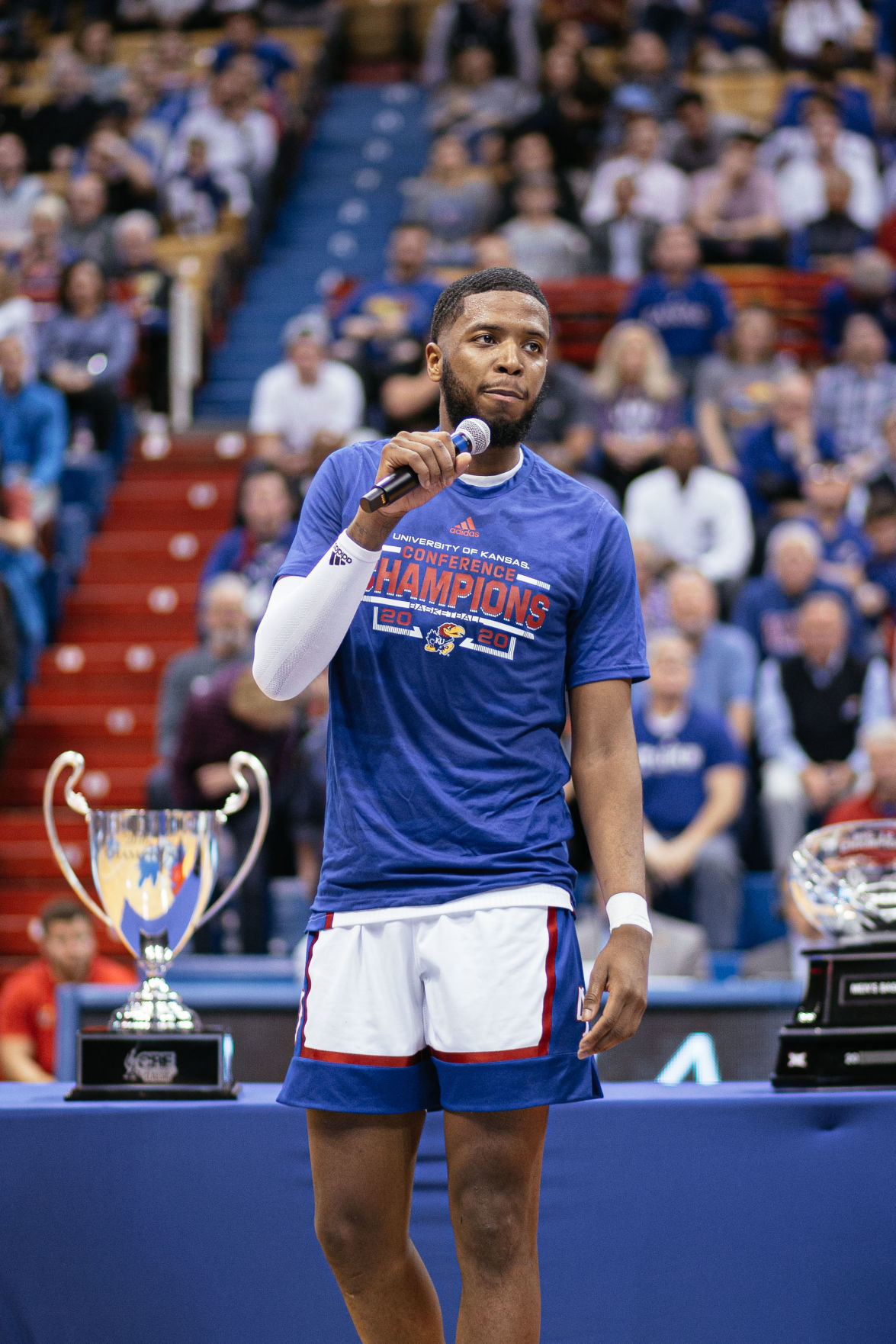 Normally a conference title-sealing win for Kansas men's basketball inside Allen Fieldhouse would present nothing but cheers from players. While there were some, all of the glee later tuned into tears.

From Delta, Nigeria, Azubuike committed to Kansas on Jan. 28, 2016. He arrived at the University of Kansas at the young age of 16. Over his four year career, he eventually grew into one of the most dynamic big men in program history.

"Walking around a campus with 18 and 19 year-old freshmen and your 16 — you should be a sophomore in high school," Self said of Azubuike. "He came here and he grew up fast."

This year, Azubuike became the 17th Kansas player during the Bill Self era to eclipse 1000 career points. He is currently averaging a double-double and a National Player of the Year candidate.

Through all of his accolades this season, Azubuike has credited his teammates for much of his success. And in his senior speech, he gave them an ovation.

"You're like brothers to me, right here," Azubuike said as he pointed to his fellow Jayhawks. "Like, we go through battles every [game]. We argue. We laugh. We've been through a lot... I really want to tell you guys I love you. I appreciate all you guys have done for me."

"[The fans] have been really supportive of everything," Azubuike said with tears in his eyes. "Coming to Kansas, [now] playing my last game here. They gave it their all. From day one, they've been by my side the whole time."

Coming into the game, Azubuike was listed as questionable after rolling his ankle against Kansas State. He said he initially thought he wouldn't be able to play.

He did just that. He fought through the injury and ended up having a career night.

Azubuike got off to a fast start to the night, as he scored the Jayhawks' first 10 points of the game.

Just 2:27 into the game, Azubuike received an entry pass before performing a drop-step into his signature hook shot while being fouled for the and-1 basket.

A couple possessions later, the former McDonald's All-American caught a lob pass from sophomore guard Ochai Agbaji before finishing with a thunderous two-handed dunk. The highlight play triggered a collective 'raise the roof' celebration from the Jayhawks' student section.

Azubuike scored his final points of the game with a little help from fellow senior, Moss.

Driving hard towards the basket, Moss hit Azubuike on the low block before the towering center rose up for another two-hand flush. This score set a new career-high for Azubuike: 31 points on a near-perfect 13-of-14 from the field.

After spending the first three years of his career at Iowa, Moss came to Kansas as a graduate transfer this off-season. He has provided some much-needed 3-point shooting to the Jayhawks' lineup, as he has knocked down 48-of-136.

"[Moss] has only been here for about seven months. But, we'd have no chance of having that right there if he didn't come here," Self said has he pointed to the Big 12 championship trophy.

Moss made sure to acknowledge the Kansas faithful in his post-game speech.

"I've been to a lot of arenas in my college career and there's nothing like this at all," Moss said. "I want to say this: I think I speak for all my teammates — we're going to do all we can to bring the National Championship home to y'all."