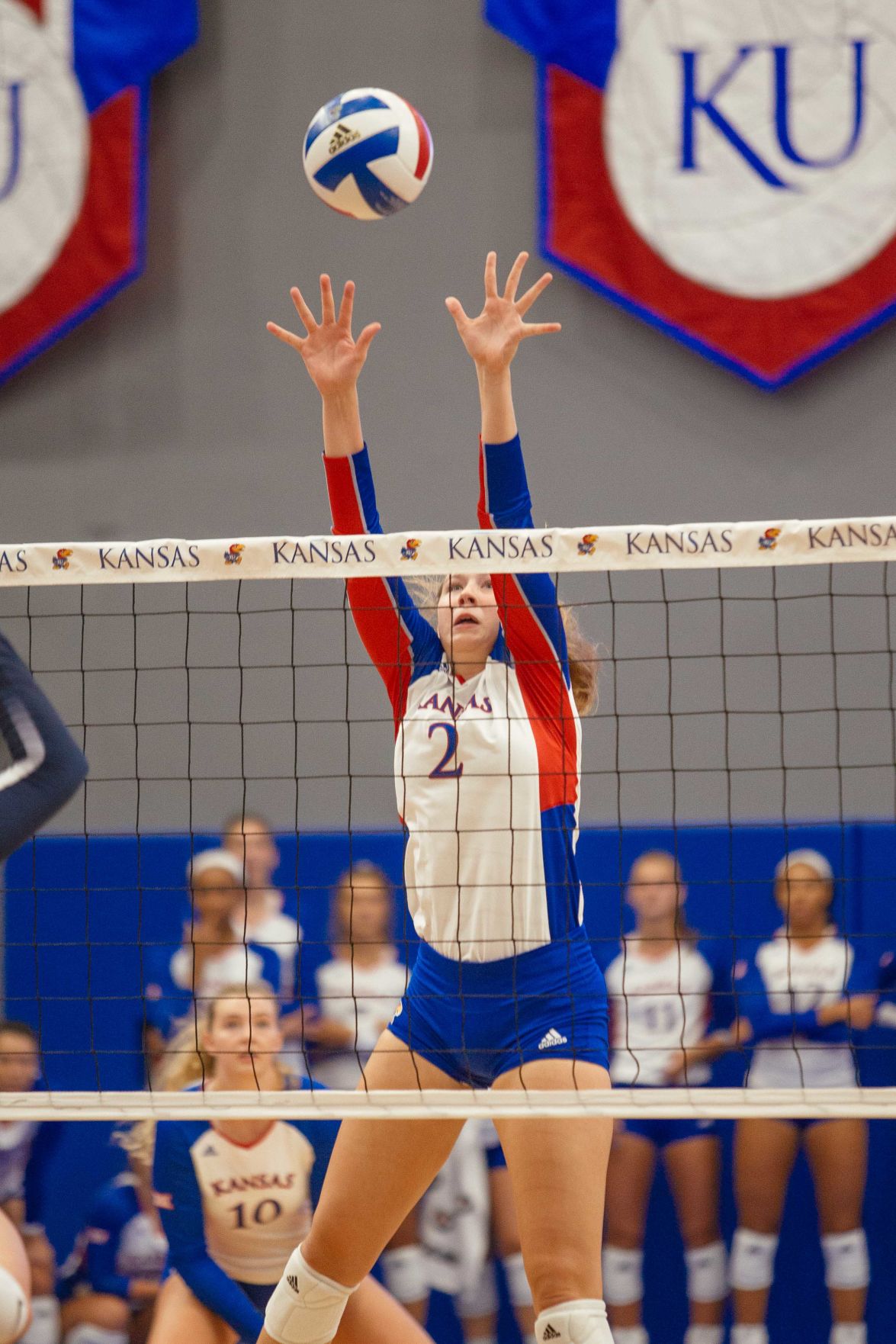 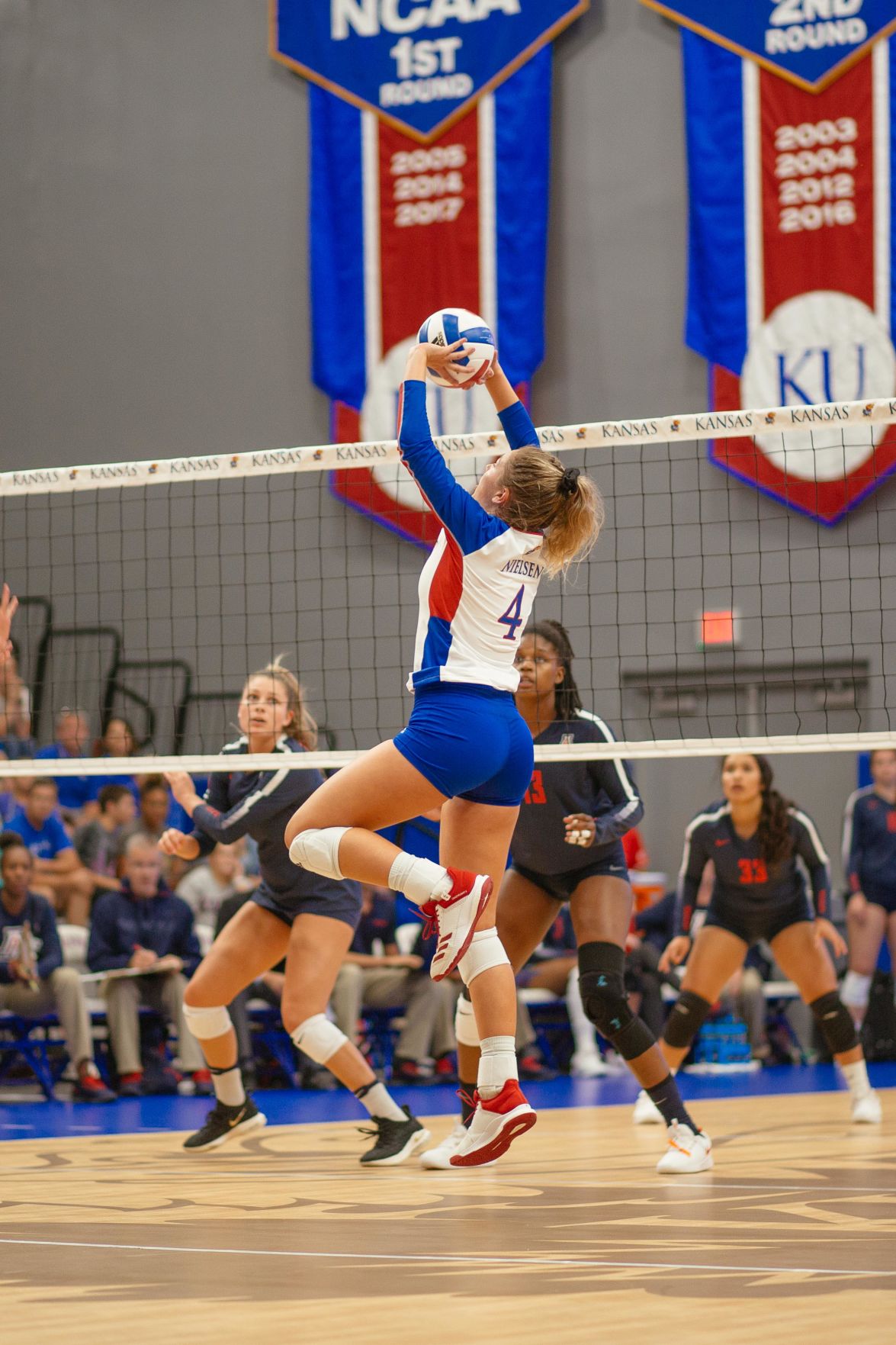 Going up against the No. 2 team in the country, Kansas volleyball was given a tough task when the Baylor Bears came to visit Saturday, Sept. 28. The Bears’ offense proved to be too much for Kansas to overcome as the Jayhawks were shut out 3-0 in Horejsi Family Volleyball Arena.

Despite playing the No. 2 team in the country, coach Ray Bechard said he wanted the team to enter this game with a free mind.

"What do you have to lose?" Bechard said.

Kansas fell to 4-7 on the year while the Bears continue their perfect record of 11-0.

"I think it was a little bit disappointing the first two sets. We let them get out and get in a really, really good offensive rhythm," Bechard said. "This is one of the best offensive teams in the country, and we did little to slow that down."

The Baylor offense was the story of the game, using its ability to rack up kills to its advantage. Coming into the matchup, Baylor had totaled 471 kills on the season, and Yossiana Pressley of the Bears had 174 herself.

Pressley finished the game with 17.

The Jayhawks’ defense has also struggled defending the kill, allowing 455 coming into the contest. The inability to rack up kills while allowing the Baylor offense to pile them up was the difference maker in the game.

In the end, Baylor totaled 45 kills while the Jayhawks only rattled off 27.

The match started off bad for the Jayhawks, going down early. Kansas was able to rattle off a couple points early in the first set, but serving errors from the Jayhawks halted all momentum.

The second set was not too kind to the Jayhawks either. Kansas went down 8-0 to start the set and was unable to stop Baylor’s attack.

The bright spot of the set came from junior setter Sara Nielsen. Nielsen looked like she was about to set up a teammate but threw off the entire Baylor defense by shifting and tipping the ball over the net.

Despite the tricky play from Nielsen, it didn’t give Kansas the momentum it needed as the Jayhawks fell 25-13 in the second set.

A hot start seemed to be all Kansas needed to compete in a set, and that was apparent in the third.

The Jayhawks went down 2-0, but a challenge on whether the ball hit the floor or not was overturned in Kansas’ favor. On the very next play, the Jayhawks scored on an attack error from the Bears, and for the first time in the game, Kansas had a lead.

"We felt like we needed to get off to a better start," Bechard said. "We needed to be the first team to five [points]."

The Jayhawks used that momentum to race out to a 6-3 lead. But the talent of Baylor shined through, and the Bears rallied off four straight points to regain the lead.

Both teams went back and forth with each other until the midway point of the set when Baylor began to break away. The Bears held a 14-13 lead and then turned it into a 17-14 lead.

Baylor held a comfortable lead, until a kill from sophomore middle blocker Rachel Langs brought the Jayhawks to within two late in the set. Langs followed up the kill with a block, along with redshirt senior hitter Ashley Smith, to put Kansas down one.

However, the one-point deficit was the closest Kansas came to tasting victory in a set. Baylor rattled off two straight points to move to a 24-21 lead. After a point from the Jayhawks, a huge kill from Pressley ended the contest.

"You could sense that they could feel pressure when we got it to 20-20, but we never got them in that situation the first two sets," Bechard said. "You've got to put them in a competitive situation where they feel pressure."

The Bears won the set 25-22 and completed the sweep over Kansas.

Smith led the way for the Jayhawks with eight kills. Nielsen finished the match with 20 assists.

Kansas will look to bounce back in conference play when it travels to Ames, Iowa, to take on the Iowa State Cyclones (9-4). The match will take place Wednesday, Oct. 2, at 7 p.m.