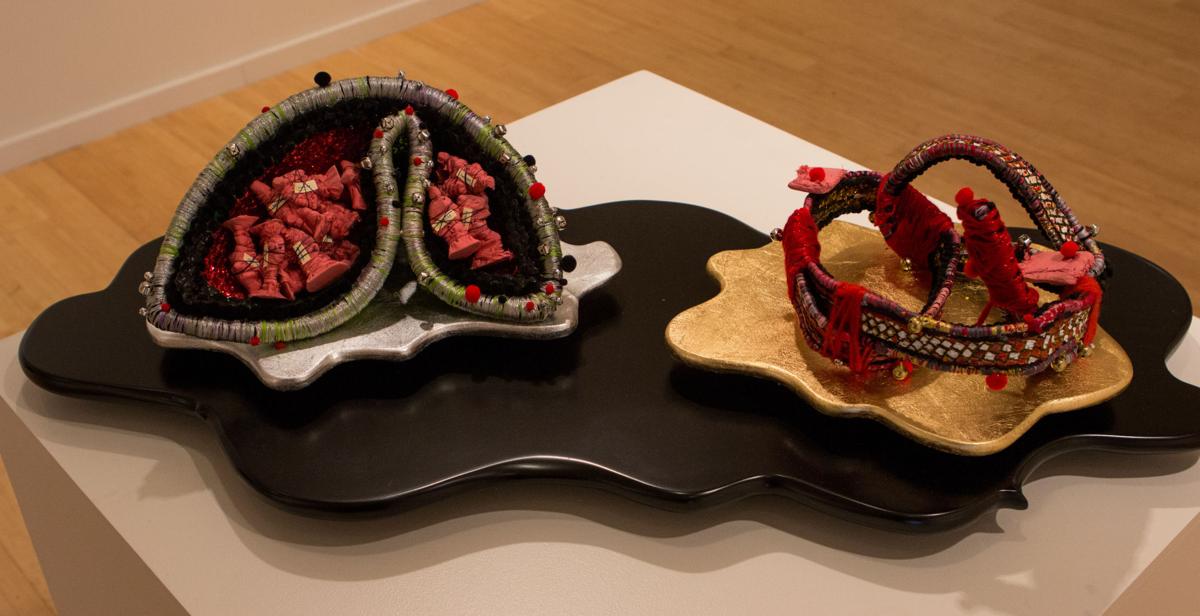 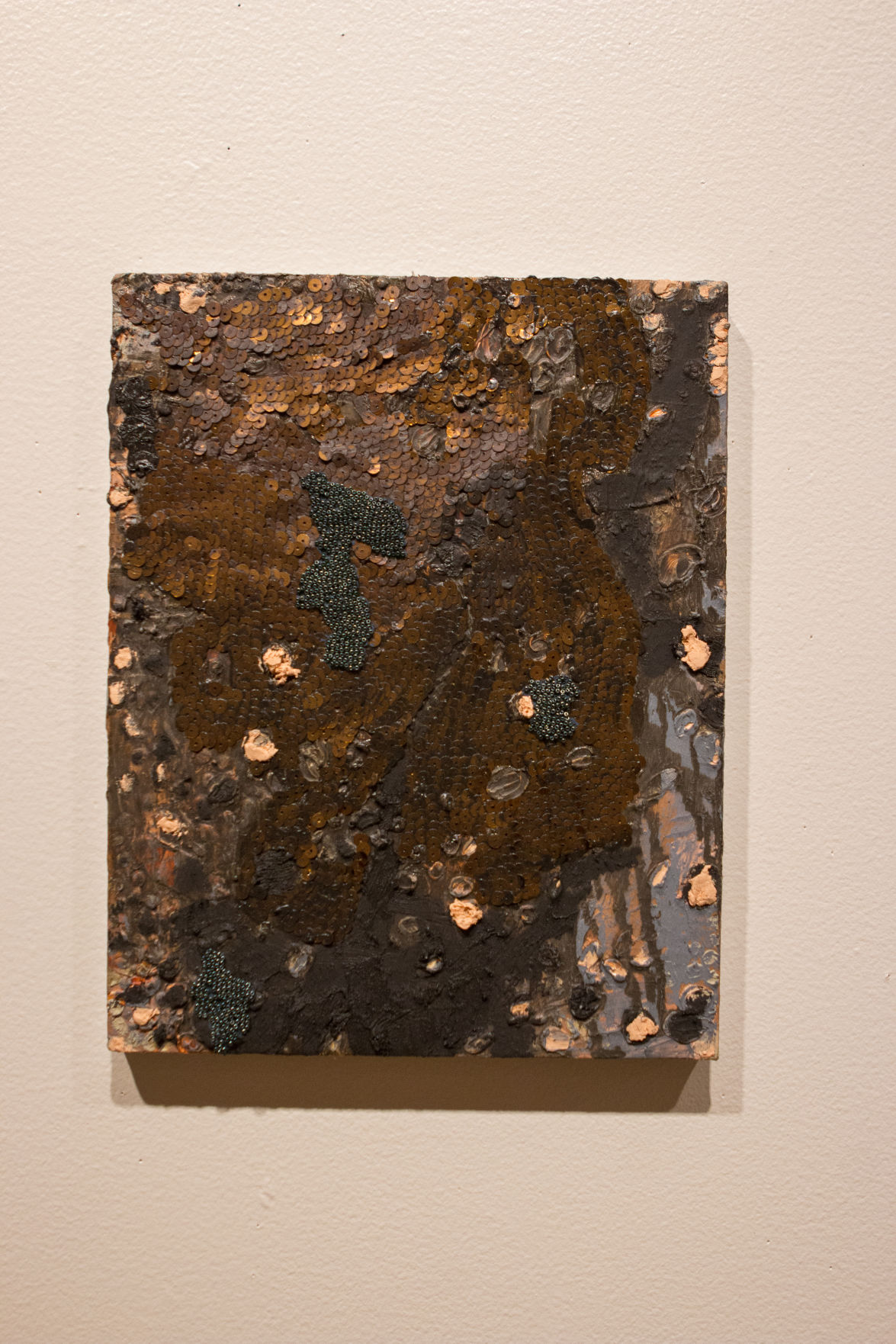 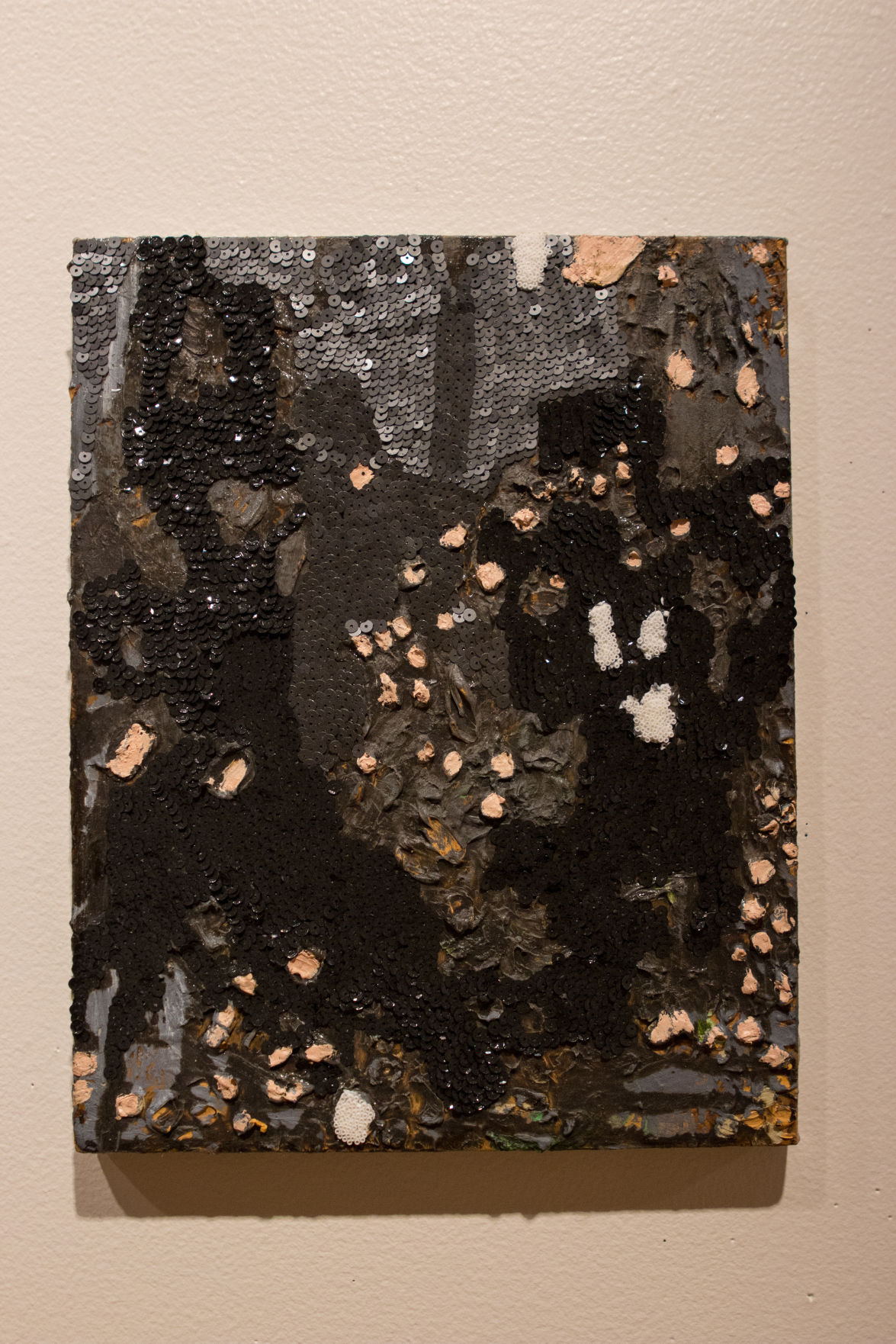 Associate Professor Tonya Hartman's with per multi-media paintings at the Lawrence Arts Center. Part of her inspiration is global strife.

War, strife, refugees and family history: these are all areas from which Associate Professor Tonya Hartman draws her inspiration and drive as an artist.

Hartman, who has been teaching at the University since 1997, is originally from New York but spent large portions of her childhood in Cuernavaca, Mexico and London, and this international influence is evident in her work.

“My paternal grandparents were Jewish and managed to escape from Germany during World War II,” Hartman said. “They ended up in Mexico, where my father and I were both partially raised, so the artwork comes from that family history of knowing somehow that who you are just ethnically or religiously can induce hatred in others towards you, profound enough to make them want to kill you.”

“Even as a child I remember drawing Jews in the ghettos and imagining the strife that they went through,” Hartman said.

Over the past decade however, Hartman said that she’s shifted her focus towards refugees from war-torn nations who came to Kansas to find shelter. Through interviews, Hartman has found men and women whose stories have spurred her artwork.

“I’ve painted their portraits and I’ve done some text-based pieces of work,” Hartman said. “I’m trying to create an archive of stories of survival from war-torn regions around the world.”

Hartman’s work itself resembles hundreds of displaced men and women as she uses an abundance of different material from human hair to glass shards to glitter.  Hartman describes herself as “an artist without definition.”

“I like to use lots of strange material, like dry corn and sequins,” Hartman said. “If you think of all those thousands of people in the world who have a story to tell I guess using manifold materials is a way to express that vastness.”

Stephanie Maximovich, a Univeristy alumna with a bachelor’s degree in painting, met Hartman when she was enrolled in one of her classes and said that as both a professor and an artist, Hartman “expresses a deep love, empathy and compassion for others.”

“In every work of art as in every situation of life, Tanya finds first the benefit in even misfortune and mistake,” Maximovich said. “She has the power to show you that your failures are worth something more than your successes.”

Currently, Hartman has two pieces on display at the Lawrence Arts Center. One, “Alphabets and Earth,’ seek to show the horrors in regions from A to Z that have endured tragedies, such as Poland during the Holocaust. With woven hair and faded Hebrew, Hartman shows her empathy for the fallen.

Despite focusing her talents on more morbid subjects, Maximovich said that Hartman has remained cheery and one of her most helpful professors while she was at the University and that her art has inspired her.

“When I see Tanya’s work, I personally feel very connected to a primitive, humbler version of myself,” Maximovich said. “The objects of embellishment are so precious, more precious than any mass produced object that we encounter daily.”