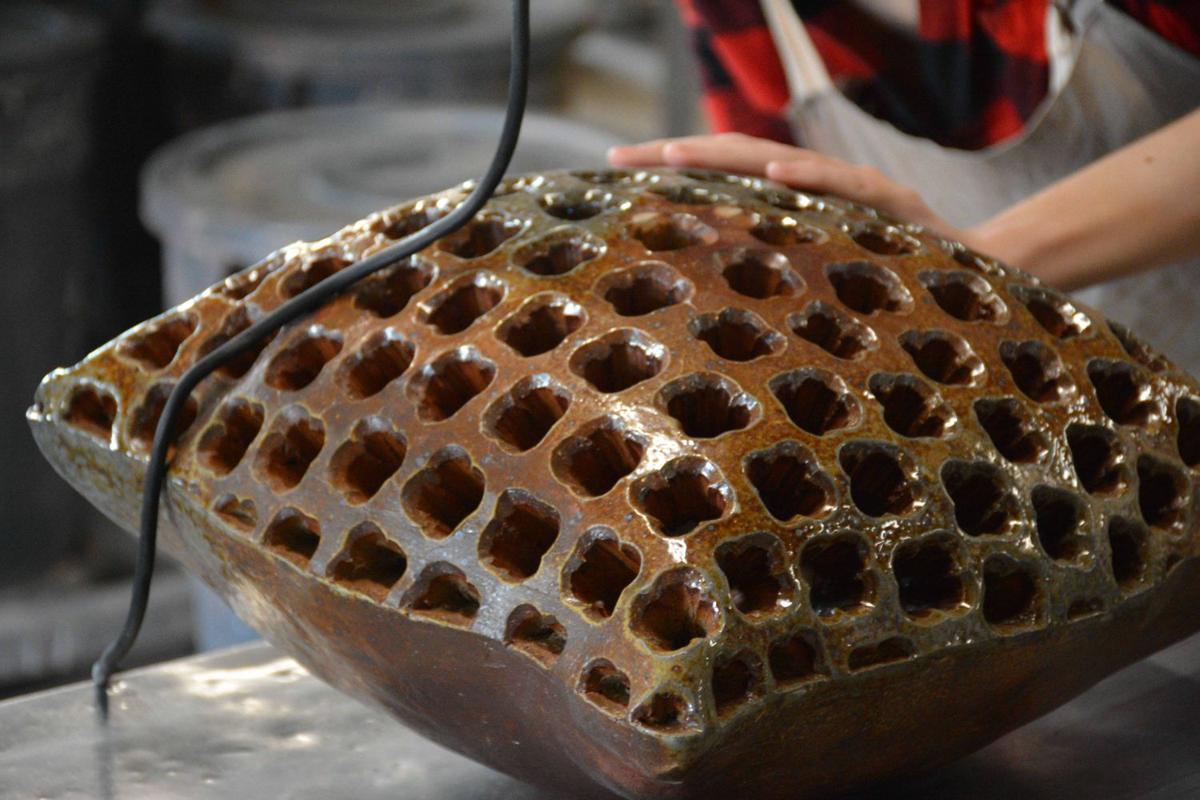 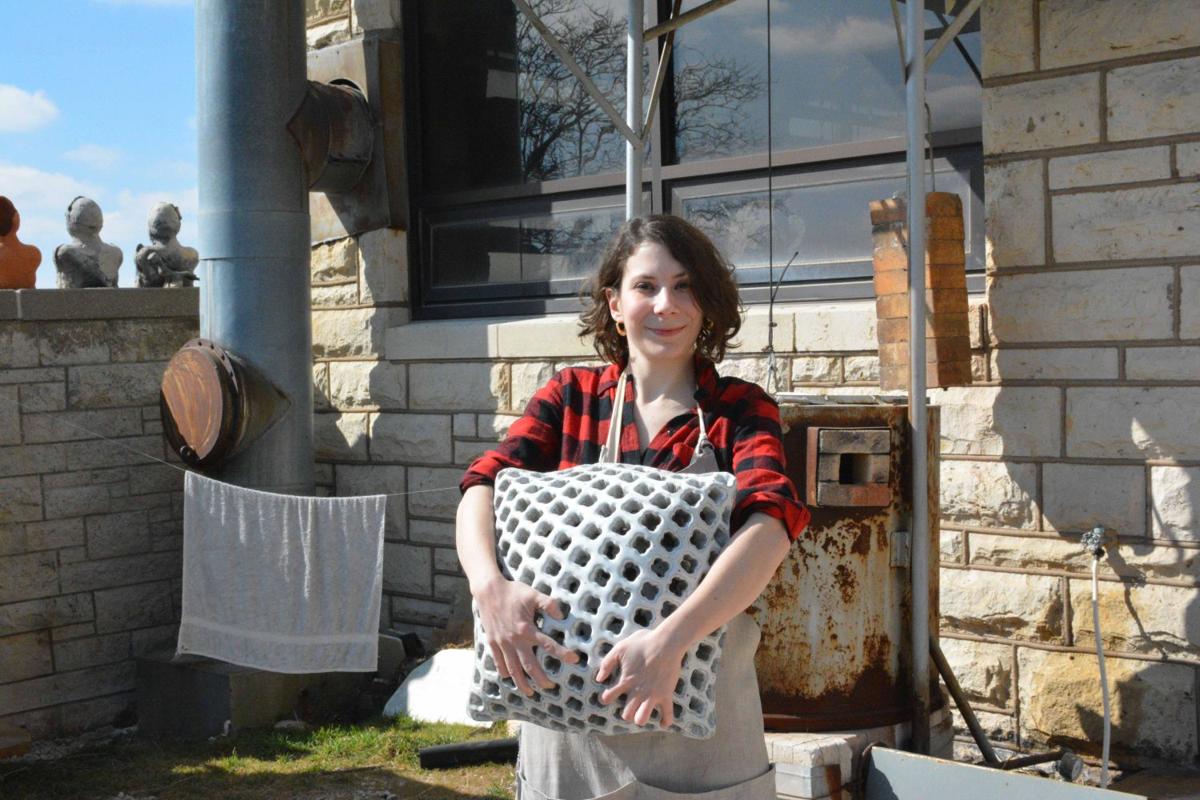 Sara Gross is an Assistant Professor of the Visual Arts Department. She is currently working on a piece she calls 'ceramic pillows.' 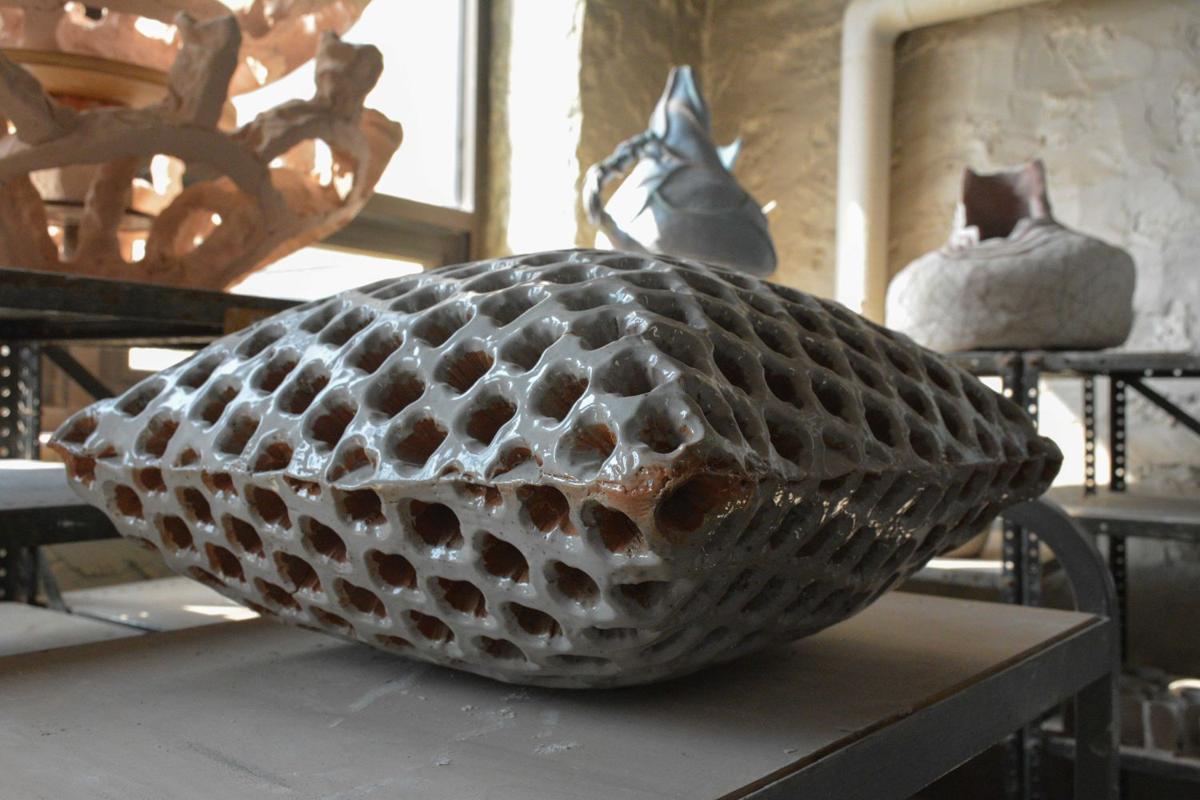 A ceramic pillow, created by Sarah Gross, sits on a shelf in the ceramics department with other works of art. 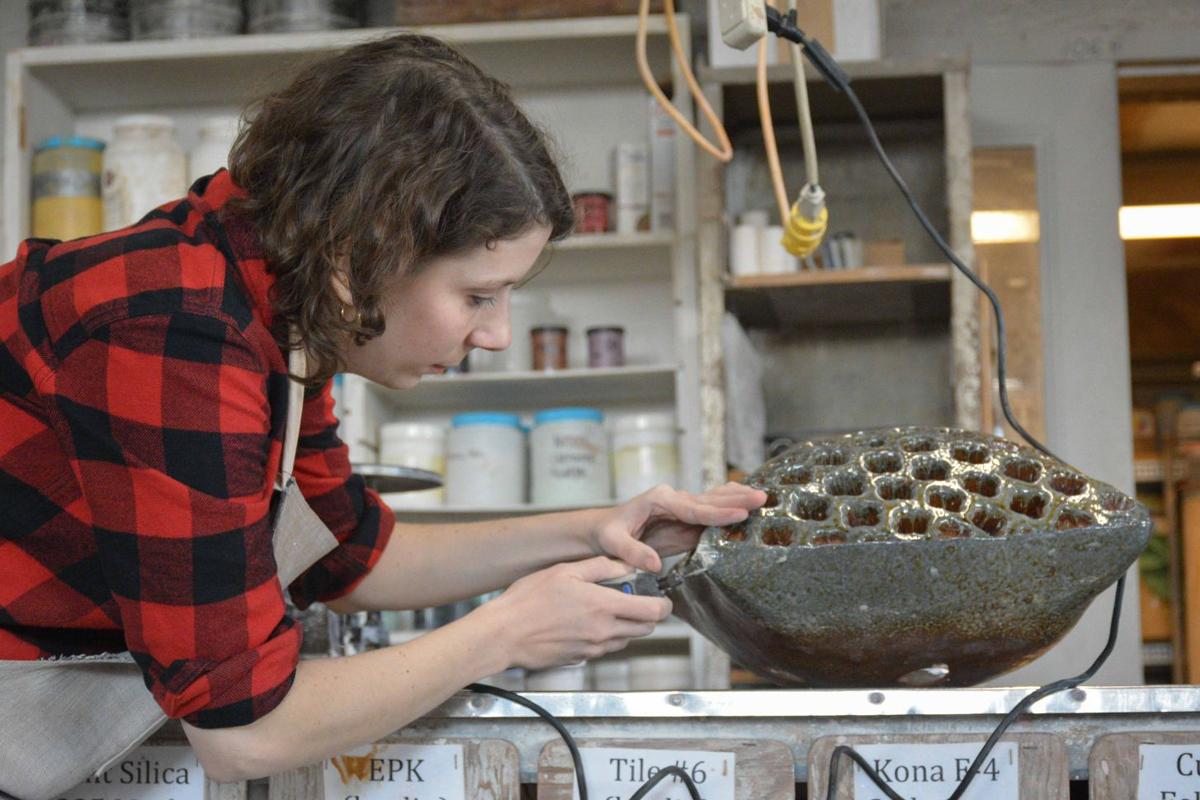 Assistant Professor of the Visual Arts Department, Sarah Gross, works in the studio on her recent creation she calls ceramic pillows.

Sara Gross is an Assistant Professor of the Visual Arts Department. She is currently working on a piece she calls 'ceramic pillows.'

A ceramic pillow, created by Sarah Gross, sits on a shelf in the ceramics department with other works of art.

When Sarah Gross was eight years old, she went on a family trip to the Old Sturbridge Village in Sturbridge, Mass.

Gross would watch pilgrim reenactments, complete with traditional blacksmiths and a cider house on site. During her family’s visit, Gross became fixated on the town’s potter, which became a major influence in her artistic development.

She said she took something special away from the trip — her new love for art, and the ability to control material-like clay in a way that is absolute and fulfilling.

"I just spent the whole time watching the potter, and I didn’t want to leave," Gross said. "So [my parents] were like, 'We have to sign her up for pottery classes at the 'Y.'”

She said she still draws inspiration from the Sturbridge town potter.

"[Pottery is] so responsive and so immediate. It starts out easy, but then it gets harder and presents you with new challenges," Gross said.

Although she was a child when the interest in pottery first sparked, she knew she wanted to make pottery a career. When it came time to decide what to do after high school, she said she knew studio art had to be involved.

However, she faced scrutiny and opposition because of certain people's stigma on the arts.

"People told me this wasn’t realistic, and [initially] I agreed with them," Gross recalled. "The one thing I did know is that I loved working at the studio."

So she immersed herself in her work at Carleton College in Minnesota. There she was also introduced to the world of media studies, which became her minor.

Gross used both disciplines to find her voice in the ceramics community. She said she now recognizes the similarities between popular TV and what she intends for her art to do.

"It makes you think about the ways stories are told and what information we can gather from stories," Gross said. "And so television is a very overt storytelling media, and I think of ceramics as being a slice of many different stories."

She added: "I look at the ceramic history and by studying that I’ve been able to pick up information about migrations, wars and massive social change that all inform a material culture that is seen throughout the world."

Her study of ceramics from college has introduced her to Islamic art and culture and the idea of the screen as a metaphor in her art. Her professors attest to her dedication for her work, which translates in her teaching.

Marshall Maude, assistant professor of ceramics, praised Gross' wide array of work as a teacher and how effective she is at communicating with her students.

"She's only been here for two semesters, but she's really great with engaging with students and it looks like they really respect her," Maude said.

These ideas are ever-present in her work. The concepts can specifically be seen in her 2010 piece that was displayed at the Lawrence Arts Center called "The Street Where You Live," where she built a tall wall composed of twenty modular segments.

"The embellished quality of Islamic art [intrigues me]. Specifically screens and how they are used in architecture," Gross said. "In my artist statement, I write about the screen and how it draws attention to the act of looking and being looked at."

The inspiration for the piece was from the silver screen — the 1964 film "My Fair Lady," she said.

"The two-sidedness that I saw in one of my favorite movies of all time, I thought [it] was sort of a nice way for people to look at the themes that I would think about in my work," Gross said. "It has the screen, where it’s sort of a barrier, but it also connects two spaces."

She added: "Something you look through, and by looking through it, it changes the act of looking, makes you aware of what you look at in a different way. It also highlights the possibilities of being looked at."

It's been over five years since she completed that work, but she still tries to instill in her students the passion she has for her ideas.

Gross said she hopes to continue working at the University to cultivate more artistic expression and to focus on installations that she wants to present in the future. At the moment, she is working on a series of ceramic pillows.

"Art-making is something that takes practice," Gross said. "I want my students to focus on their goals, their conceptual goals, their technical process to get to that endpoint. Whether [or not] it aligns with your original goals doesn’t mean that it’s a failure. Just being reflective about your choices and where they took you, that is what is really important about being a better artist."