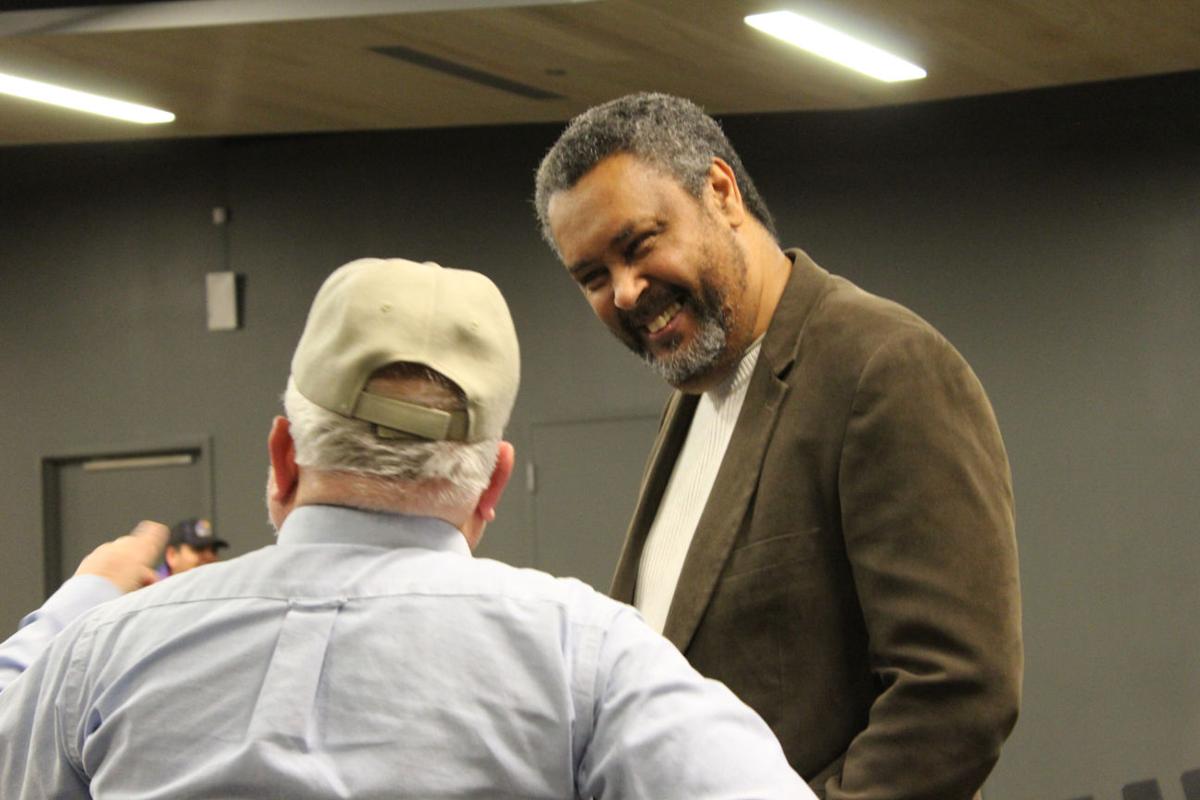 Kevin Willmott, director of Fast Break, speaks with a compelled audience member after the showing at Lawrence Public Library.

Kevin Willmott, director of Fast Break, speaks with a compelled audience member after the showing at Lawrence Public Library.

In light of Martin Luther King Jr. Day, the Lawrence Public Library held a viewing Monday night of a documentary by the University’s own Kevin Willmott, a professor of film and media studies. His documentary "Fast Break: The Legendary John McLendon," ties into MLK Day with themes of struggle, persistence and overcoming.

Kristin Soper, Adult Events Coordinator for the library, said she had heard about the film from her boss, and after doing some research decided it would be a great opportunity to show it for MLK Day, because of the film's resounding theme of perseverance. Willmott had shown films at the library before, so Soper was excited to share more of his work with the community.

"Fast Break" tells the story of John McLendon and his struggles for equality in the 40s and 50s. McLendon was the first African American student to earn his degree in physical education at the University, and studied under the legendary Dr. James Naismith. They both shared similar qualities such as strong faith and a love for basketball. McLendon had found the perfect mentor.

Willmott captured the struggles of McLendon fighting for equality in the world of basketball and his efforts to end segregated teams. Throughout the documentary, McLendon was said to have a “Martin Luther King-like character” by many of his former players. He was persistent, a little stubborn, full of humor and peaceful in his endeavors. Instead of protesting, McLendon liked to negotiate and prove his team’s skill set, and he began to see results.

“He is the reason we have integrated basketball today,” Willmott said.

McLendon became well-known for his style of basketball, called “the fast break,” referred to in the film as “revolutionary, simple, but genius.” He's also known for “The Secret Game” he held with his all-black team from the North Carolina School of Negroes, who played against an all white team from Duke University. This was the first time in history that black and white men had competed on the same court. Following that game, another groundbreaking moment happened when the teams played again, but intermixed.

After over 20 years of coaching different teams and winning multiple awards for his endeavors, McLendon was soon inducted into the Naismith Memorial Hall of Fame as a contributor in 1979, but was inducted again as a coach later in 2016. This distinct achievement was a step towards equality because he was the first African American coach to be inducted.

The story of McLendon’s life through Willmott’s film was a contribution to the celebration of Martin Luther King Day that not only showed the rich history, but progress that has happened in the basketball community.

“I’m honestly more of a March basketball fan, this might be heresy, but my favorite part was that Coach McLendon didn’t let the world get him down,” Soper said.