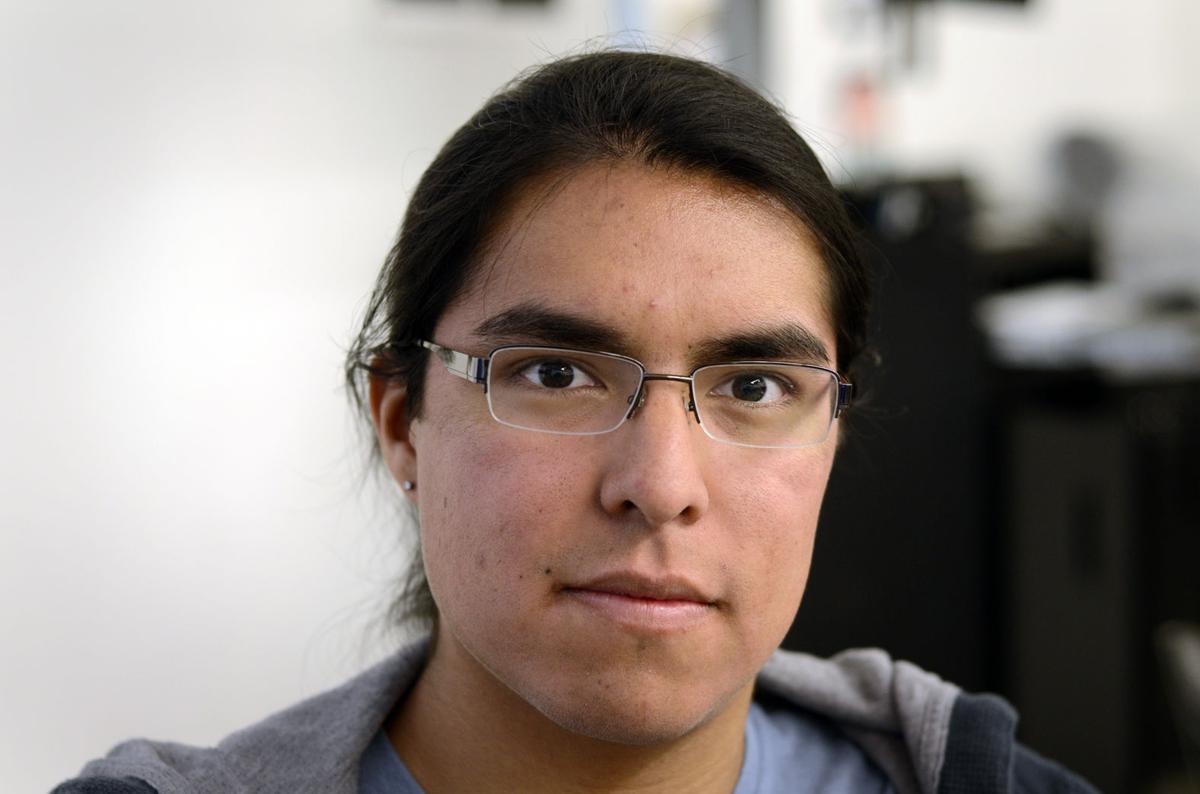 Miguel Calderon, a senior from Peru, started a project that invites University community members to share their thoughts on the open carry law on campus. He called it an "art intervention." 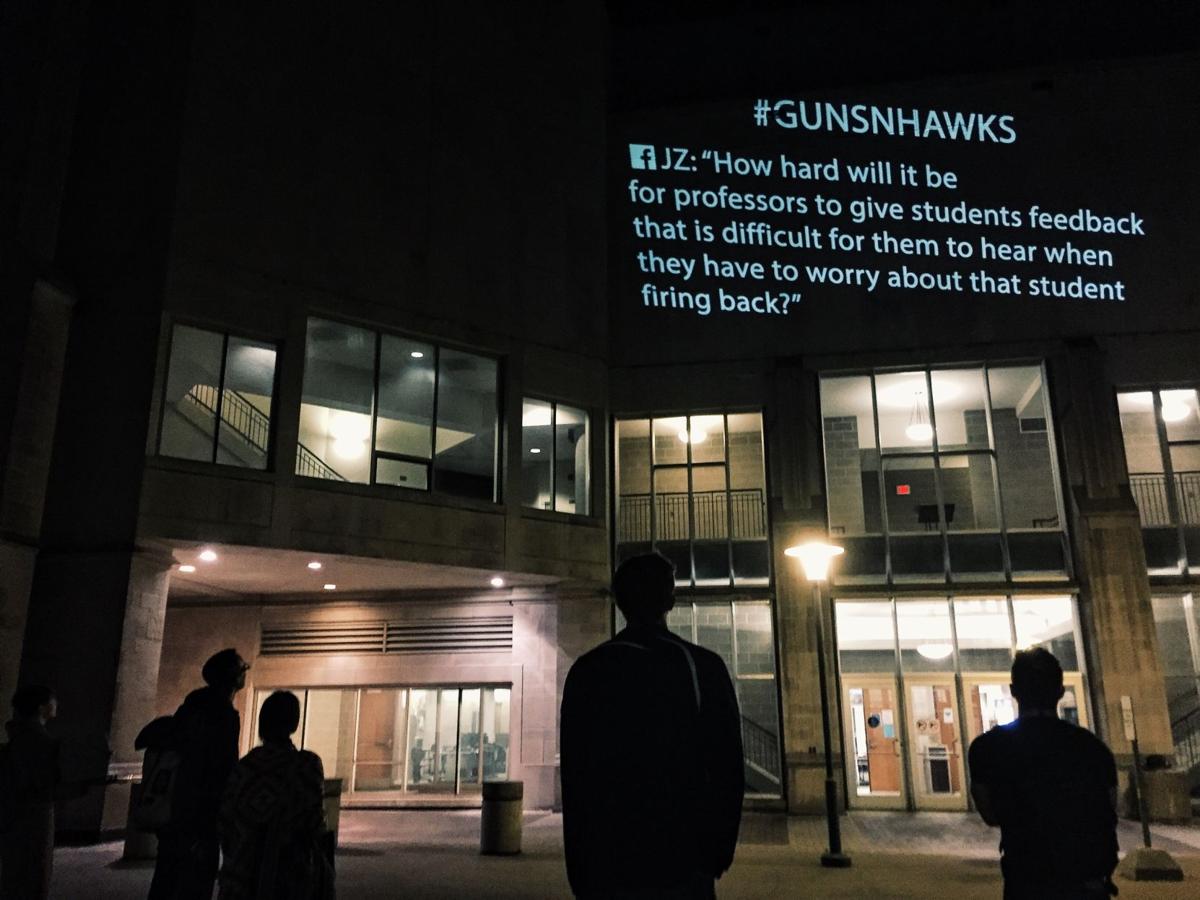 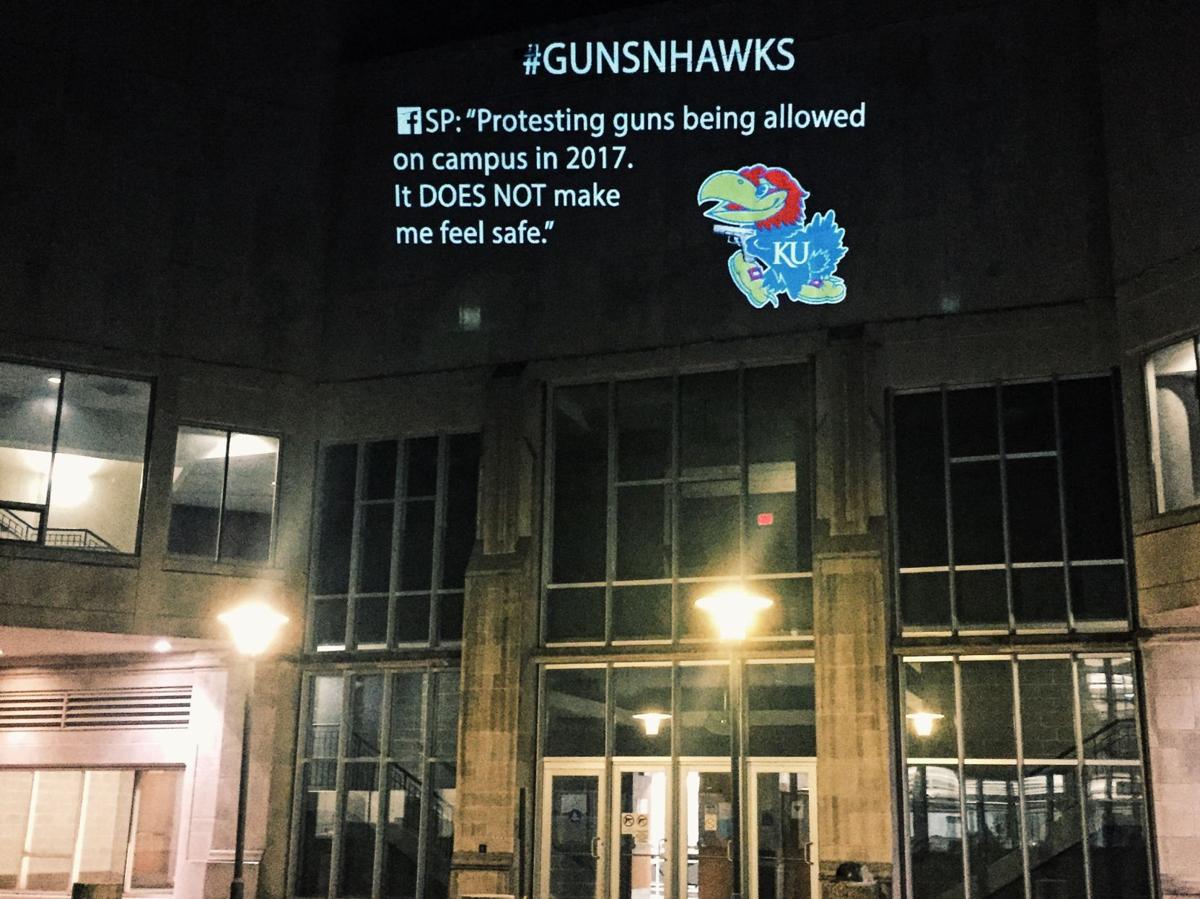 Miguel Calderon, a senior from Peru, started a project that invites University community members to share their thoughts on the open carry law on campus. He called it an "art intervention."

Miguel Calderon, a senior Fulbright student from Peru, is a familiar face on campus. His infectious, wide smile has greeted many students in the food court at the Underground, where he works part-time.

He has tried on a couple of different hats throughout his undergraduate career, from computer science, to acting to film. Even though he came to the University to study engineering, he said it “just wasn't for me.” He switched his major from computer science to visual arts.

“Art has a lot of social meaning for me,” he said.

Most recently, this social meaning has prompted the senior to do what he calls an “art intervention” on the gun laws that allow open carry on campus and will be effective next year.

For four nights, he will shine projections of student’s reactions on the walls of campus buildings.

He started a Facebook and Twitter account called GunsNHawks one week ago. On both accounts he asks the University community to reply to questions about gun laws and how it will affect them. In the first two days, 15 people responded on Twitter and 10 people stopped to talk to him about the comments shone on the walls.

One question sent on the first night was, “How safe will you feel once guns are allowed on campus?”

One of the first replies:

@GunsNHawks I am not entirely against it. That said guns are not needed on campus. Just keep smart and safe people. #GunsNHawks

In theory, his project is an attempt to stir conversation. In practice, the project is Calderon lugging around his laptop and a rented projector to shine tweets on the walls of campus buildings for four nights.

Throughout the event, he will share photos of the projections and replies on social media with the hashtag #GunsNHawks.

“I'm expecting someone coming and making me stop since I'm showing comments about a controversial topic,” he said the first night of the project. “But I plan on doing it until they stop me.”

His project started Monday and is slated to end Thursday. He started the art intervention at Daisy Hill and will end the performance at Anschutz library. Calderon said he is interested to see what others have to say and how they will react to this intervention.

This makes sense, he said, because to be an artist he has to touch on many different subjects. Art helps illuminate issues that affect the general public, he said. Benjamin Rosenthal, his instructor and assistant professor of expanded media at the University agrees.

Rosenthal met Calderon two years ago when he enrolled in his Fundamentals of Expanded Media course and has worked with him since. Recently, Rosenthal took Calderon to Chicago — one of Calderon’s dream cities — with him as a production assistant for a performance.

“[It] was an exciting evolution both in my interaction with him and in his transition from student to professional,” Rosenthal said. “Miguel's work probes a range of issues that vary from personal to socially oriented.”

Because Miguel’s close with his mother, he is inspired by her warmth and openness with those around her, he said. For that reason, he wanted to work where he could help others, too.

This semester, Calderon is an intern at Van Go, a non-profit organization in Lawrence that employs at-risk youth from different high schools in the area. Calderon supervises teens who are painting a mural for the group’s 20th anniversary. He said he’d like to continue this fusion of art and social and political issues.

“It is cool because I feel like I’m part of something that is using art and that is helping people," Calderon said. "And I want to continue that.”

When he first came to the University, he majored in computer science but grew bored. He says the field didn’t click with him.

He wanted to interact with more people and engage on a more personal level. His upbringing had a part to play in all of this. As a result of moving to and from different cities at a young age, he said he experienced a blend of cultures and aesthetics.

“Being raised in Madrid and in Lima — those are huge cities and they are noisy and a lot of people from different cultures and different backgrounds, I love that,” he said. “I love the noise."

He added: "I love seeing that happen and I love that wherever I am there is something always interesting within walking distance. That’s always in Lima and in Madrid.”

Calderon is an inquisitive student. He’s talkative in classes, eager to ask questions or ready to answer if called upon by a professor; he is definitely not shy.

He was born in Madrid. When he was six, Calderon, his one-year-old sister and mother returned to Lima, Peru where his father worked. For his first six years, his mother, Rita Mejia, who was a nurse, raised him and his sister.

“Solíamos hacer todo juntos desde las compras hasta los paseos al campo,” his mother said. Translated this means: “We used to do everything together, from shopping to field trips.”

She said he was a charismatic and caring child, particularly when his sister was born.

His mother’s sisters also helped raise them since his father was away. He said they played a large part in showing him how to empathize.

“[My mom] is easily the most important person in my life, without a doubt,” Calderon said.

But he said his sister holds a special place in his heart. She also keeps him motivated.

“Since I [was] little, my brother has always been one of the most influential persons in my life,” his 16-year-old sister Alejandra Calderon said. “He is my perfect example [for] what the life really means: An internal balance between your priorities, like job or study with your social life, in order to be happy despite the problems.”

He said his love for the electricity of a big city spurs his interest to move to a big city after graduation. Right now, he’s thinking about Chicago. He has one year after he graduates to stay in the U.S. and although he likes Lawrence, he said a big city gives him the spark he needs. His plans after graduation are to travel to big cities like New York or go back to Chicago until his school visa expires.

“Sometimes I feel tired but then I think in 20 years I’m going to be 41 and I’m going to regret not doing as much as I could," he said. "That thought really pushes me."

I feel like I’m part of something that is using art and that is helping people ... and I want to continue that.