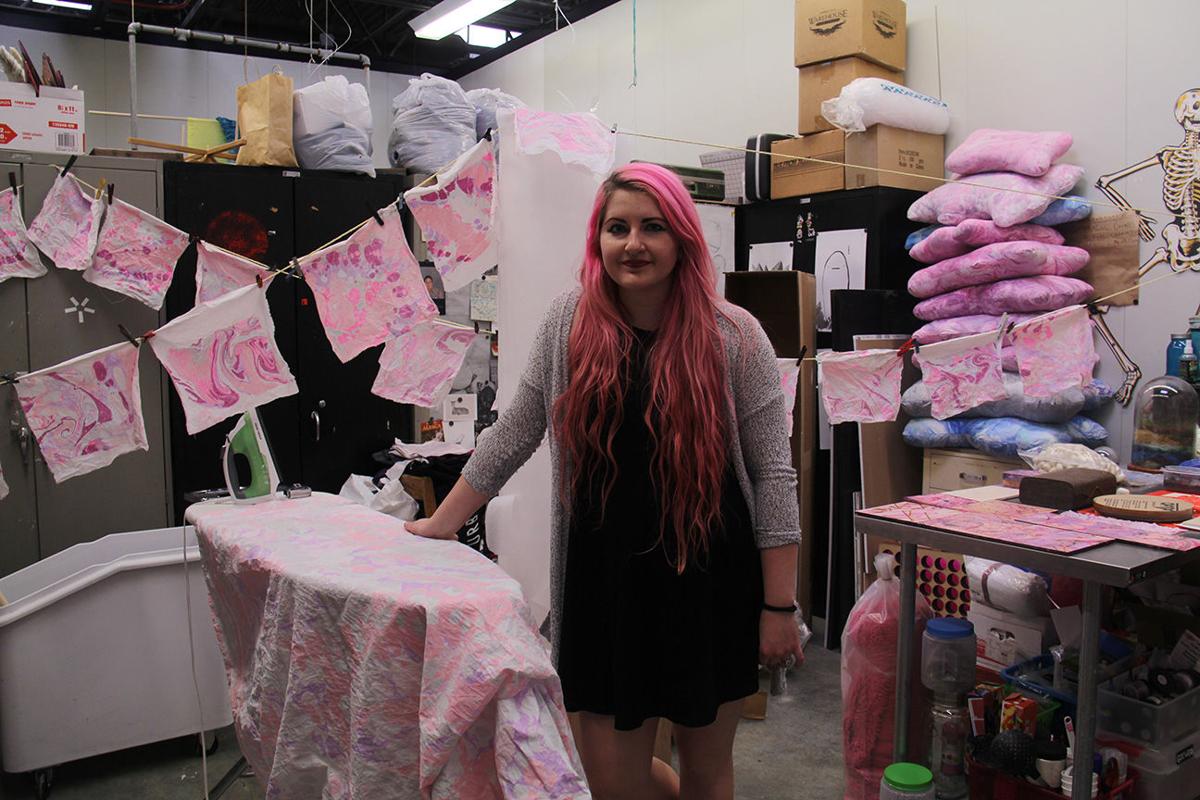 Shelby Burchett uses textures and 'goop' to explore her spirituality and elicit childlike curiosity. Burchett's pieces will be featured in her upcoming show. 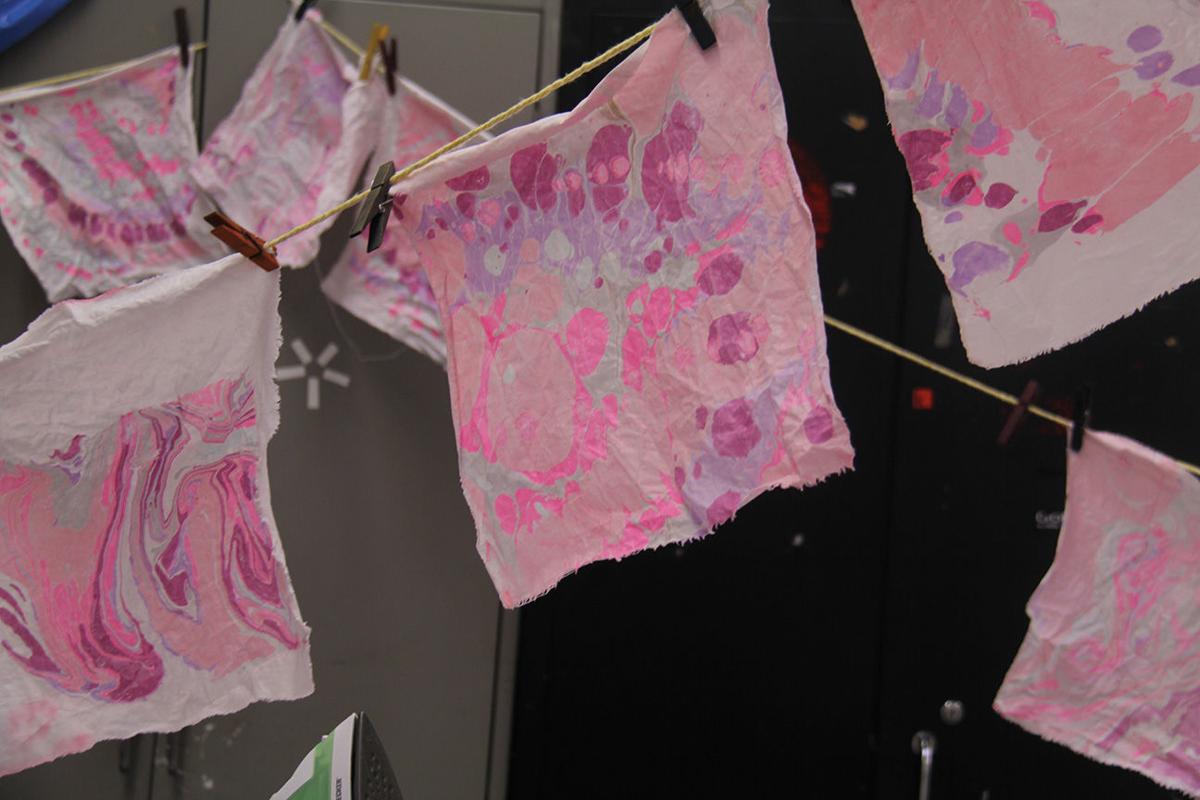 A piece of water-stained fabric hangs up among several other similar pieces from Shelby Burchett's collection. 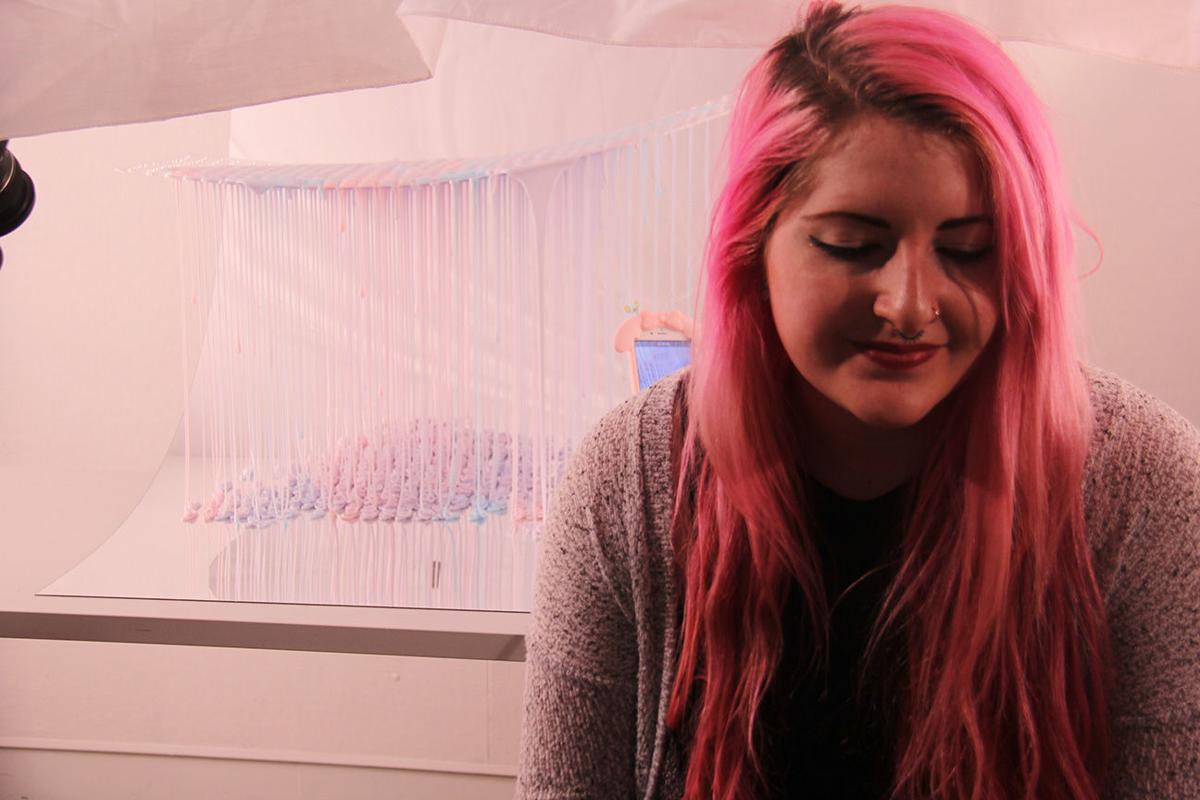 Shelby Burchett uses textures and 'goop' to explore her spirituality and elicit childlike curiosity. Burchett's pieces will be featured in her upcoming show.

A piece of water-stained fabric hangs up among several other similar pieces from Shelby Burchett's collection.

The spring semester brings a unique opportunity for graduate students at the University to show off what research has interested them in their three years of study. Throughout the rest of March and the first two weeks of April, eight artists working with various media will present their theses in the Art and Design Gallery in Chalmers Hall.

One such graduate student, Shelby Burchett from Liberty, Mo., has taken her previous education from the Kansas City Art Institute with textiles and fabrics and elevated it to a new creative process she’s titled, “Goo-Witching: Hydromancy."

“A lot of my work is experimental, but I definitely consider my textile background as the reason I’m working with such strange materials,” Burchett said.

Burchett once focused on weaving as her art form and said working with the “goo," as she calls it, is just an elevated form of weaving.

"The goo works as the warp, the strings that move vertically, and the laser cut plastic works as the weft, the horizontal strings — it’s just happening through space instead of a two-dimensional cloth," Burchett said.

Burchett said her research with goo and other unorthodox materials began as an accident after leaving unclean materials out for too long. Crystals began to form on one of her pots, peaking her curiosity in the chemical process that led to the formation.

“I started to grow my own crystals and researched the chemical compounds of the material to experiment with the composition, and that’s where I discovered my goo,” Burchett said.

Burchett uses the flowing and evolving materials to highlight her interest in change and entropy. Fascinated with magic and the occult, Burchett said she uses her work to explore her spirituality while attempting to illicit child-like curiosity from viewers.

“When I came to KU I was opened up to so much I hadn’t experienced before; I had never seen so many books," Burchett said. "I began looking at magical traditions and the anthropology of witchcraft and have been transitioning those ideas into my own personal belief system and spirituality through materials.”

Burchett said through her work she can explore both the science and magic of the world and that she’s always looking for new things to “fill her heart with child-like curiosity."

“I feel like we get old and we get stuck looking in a certain way and I think we forget that things are always changing and transforming, and I hope my work can make people remember that things can still be new and have a bit of magic," Burchett said.

Another artist in the graduate program, Jason Zeh from Kansas City, Mo., also understands the concept of change and fluidity with his work that will be on display in the exhibit under the title, “Asynchronous: Voice & Body.”

Zeh, originally from Bowling Green, Ohio, moved to Kansas City, Mo., after his partner accepted a job offer. Zeh, who has a master’s degree in English, began teaching writing in the University's English department when he discovered the expanded media program in the School of the Arts, which he said worked perfectly given his other interests.

“My real life outside of my job for the last 10 or 15 years has been devoted to experimental music,” Zeh said. “I’ve spent a lot of time touring the country and other parts of the world playing experimental music so expanded media really seemed like it offered a good opportunity to work with sound but also to expand into video and performance art and installation.”

Zeh primarily works with sound and will display a multimedia performance art piece during his exhibition, which may be more daunting than it sounds.

“I’ll be performing for four hours a day all week long and fortunately everything has been so busy lately that I haven’t had the time to appreciate the reality of what that means,” Zeh said.

Zeh said he was listening to NPR when a speech therapist began to explain how she would help transgender people negotiate the differences between the speech patterns of men and women; his thesis has since been looking at just that.

“I’ve been looking into all of the non-language parts of speech that really say a lot about the societal concept of gender,” Zeh said. “I’ve been writing a software that enables me to go around and collect data as people are walking through the space and then translate that data in a way that changes my voice to replicate the attitude or presentation of that person.”

Zeh’s software incorporates where a person chooses to stand in the room, how long he or she will stand there, as well as a myriad of other things, to distort his voice while he speaks a certain command.

The dates and titles for the other six graduate exhibits can be found online at the University's calendar of events.