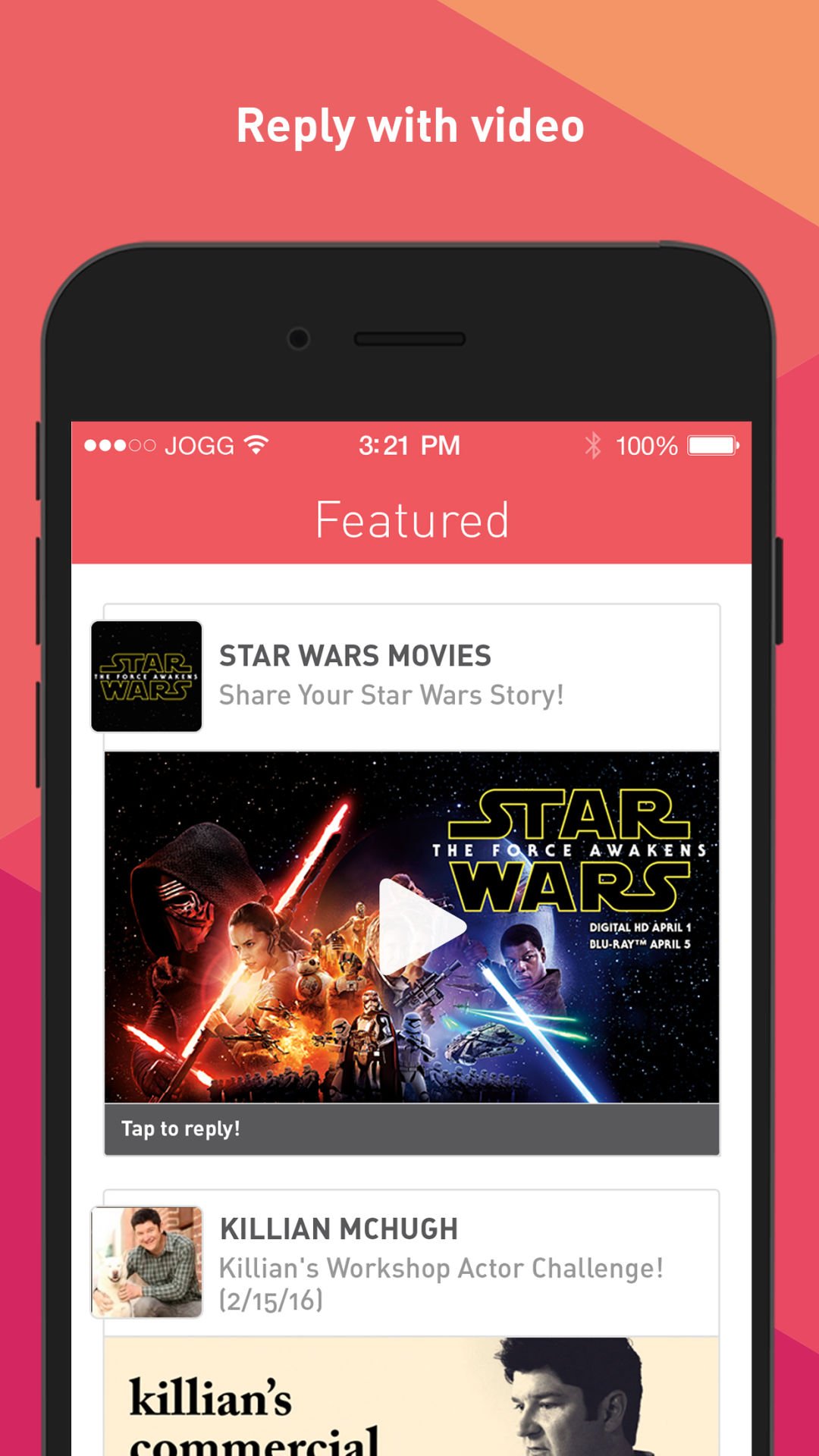 The video response app Jogg, shown above, is available on both iOS and Android devices. 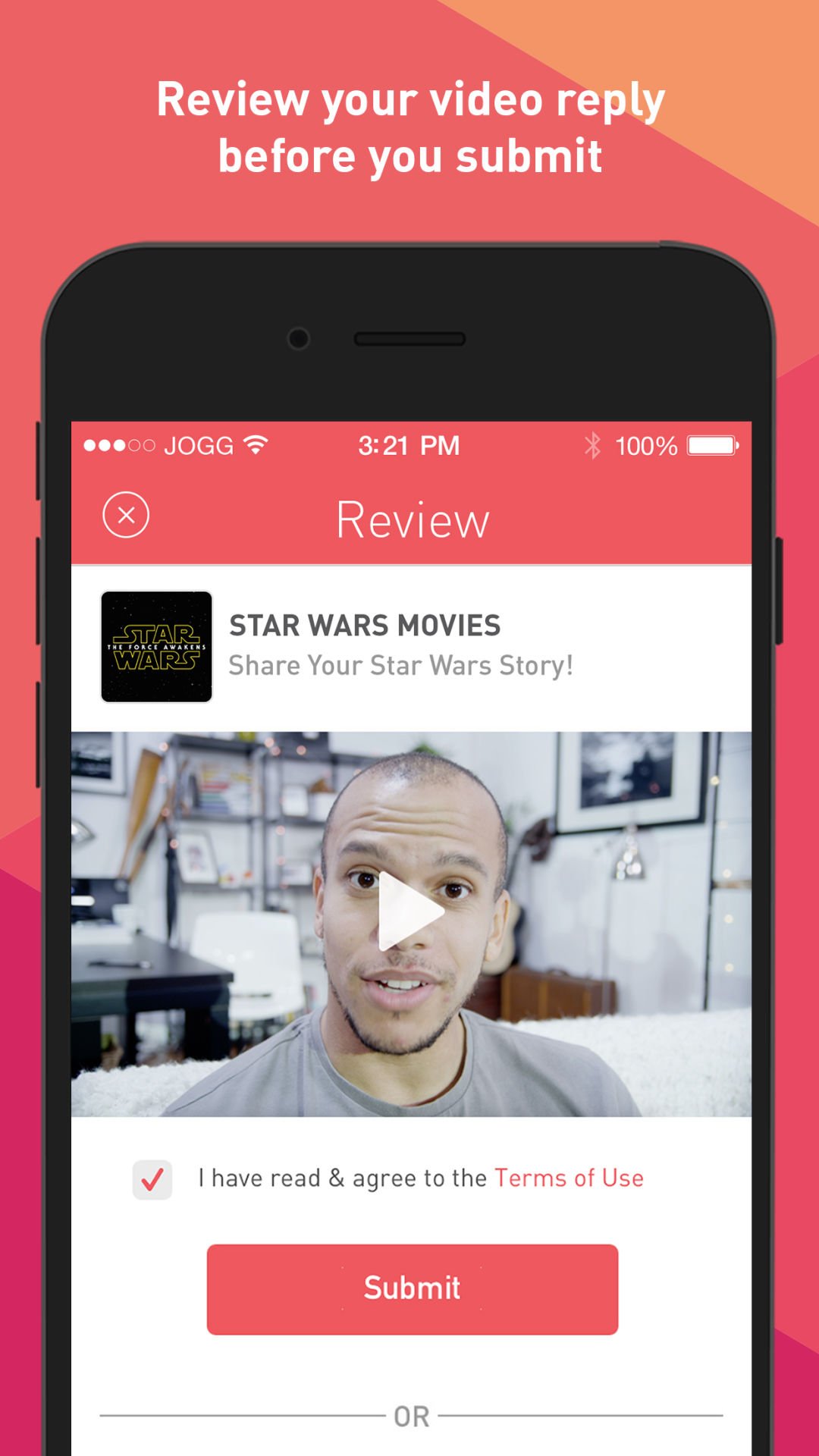 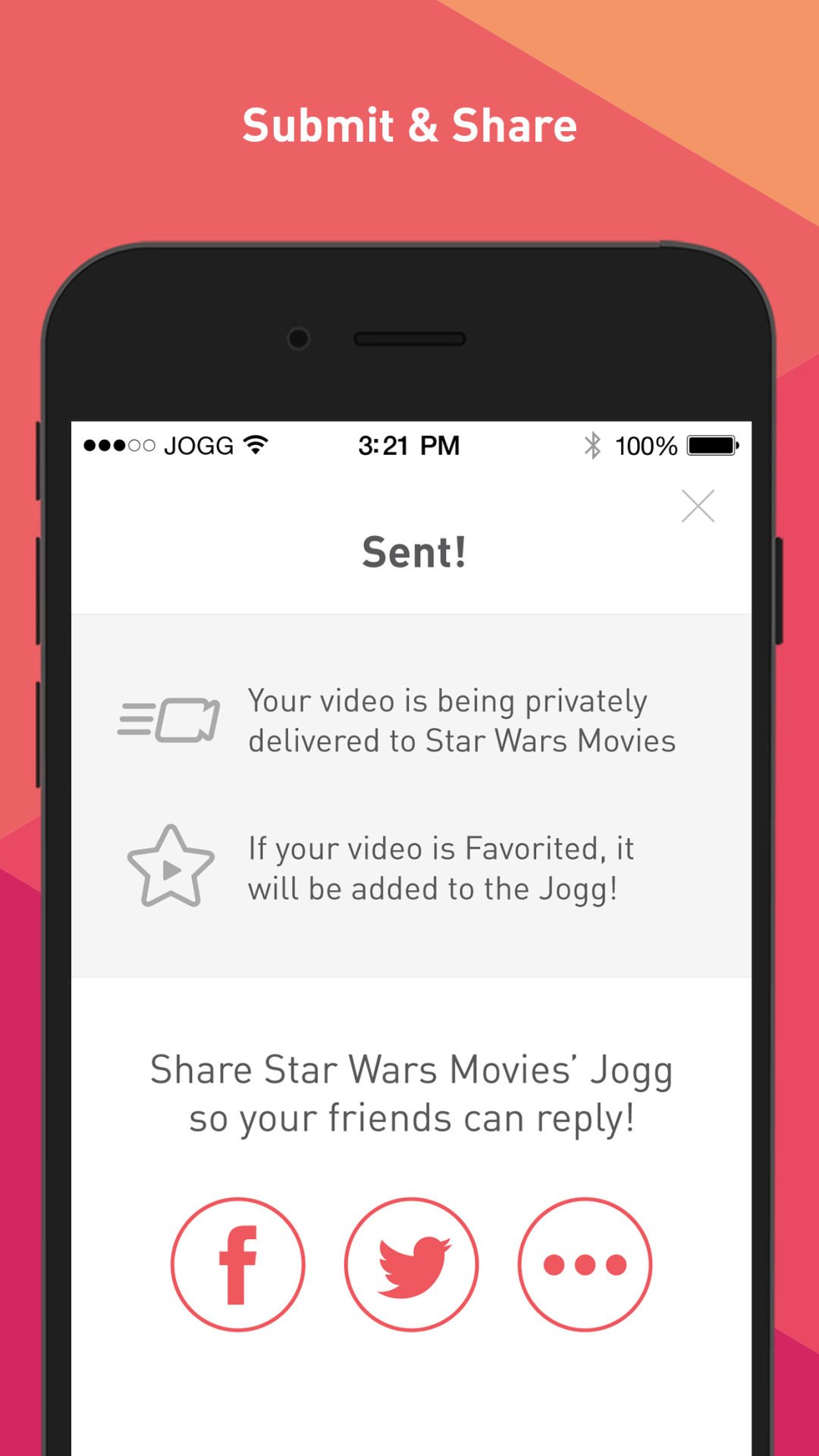 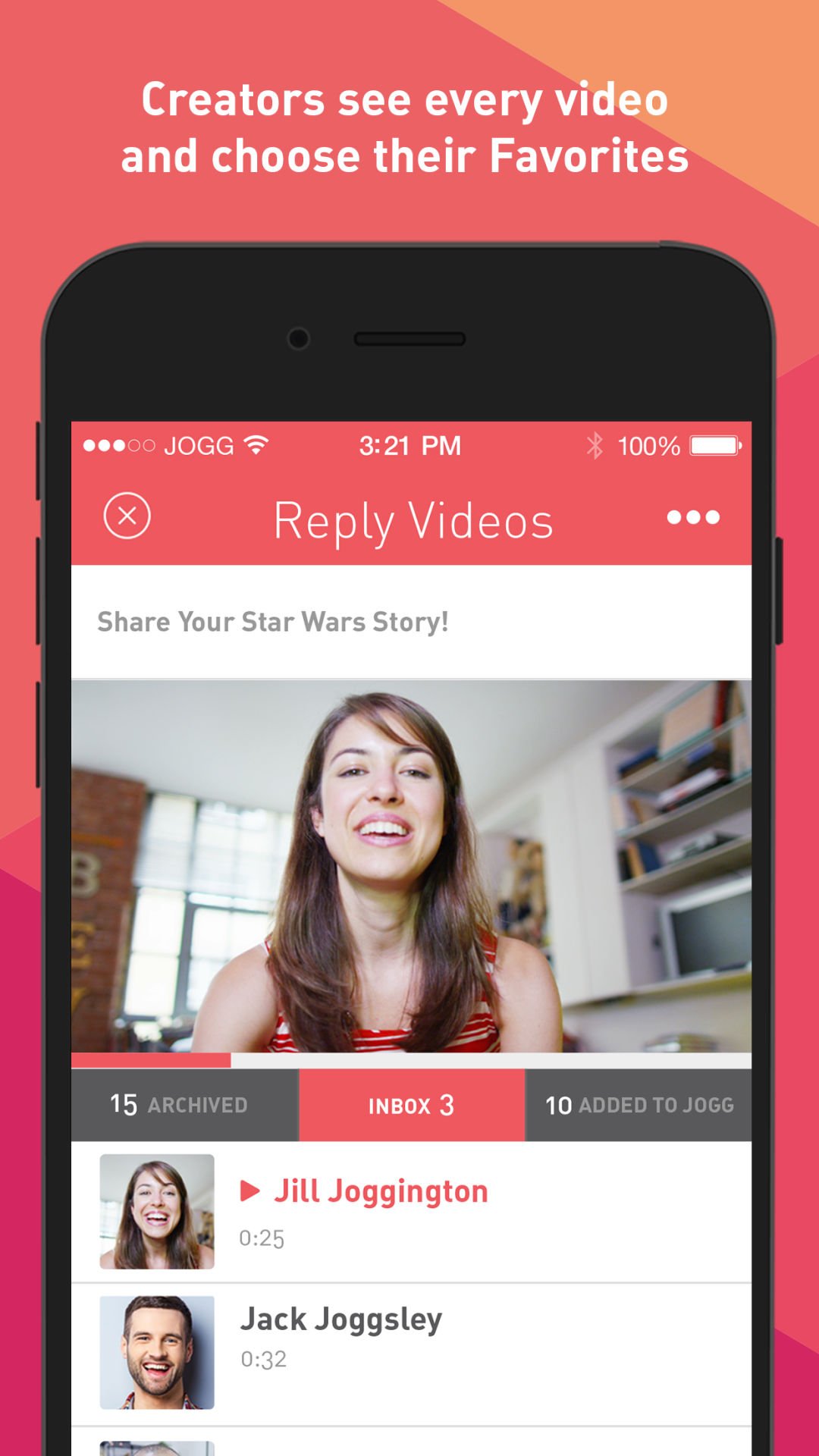 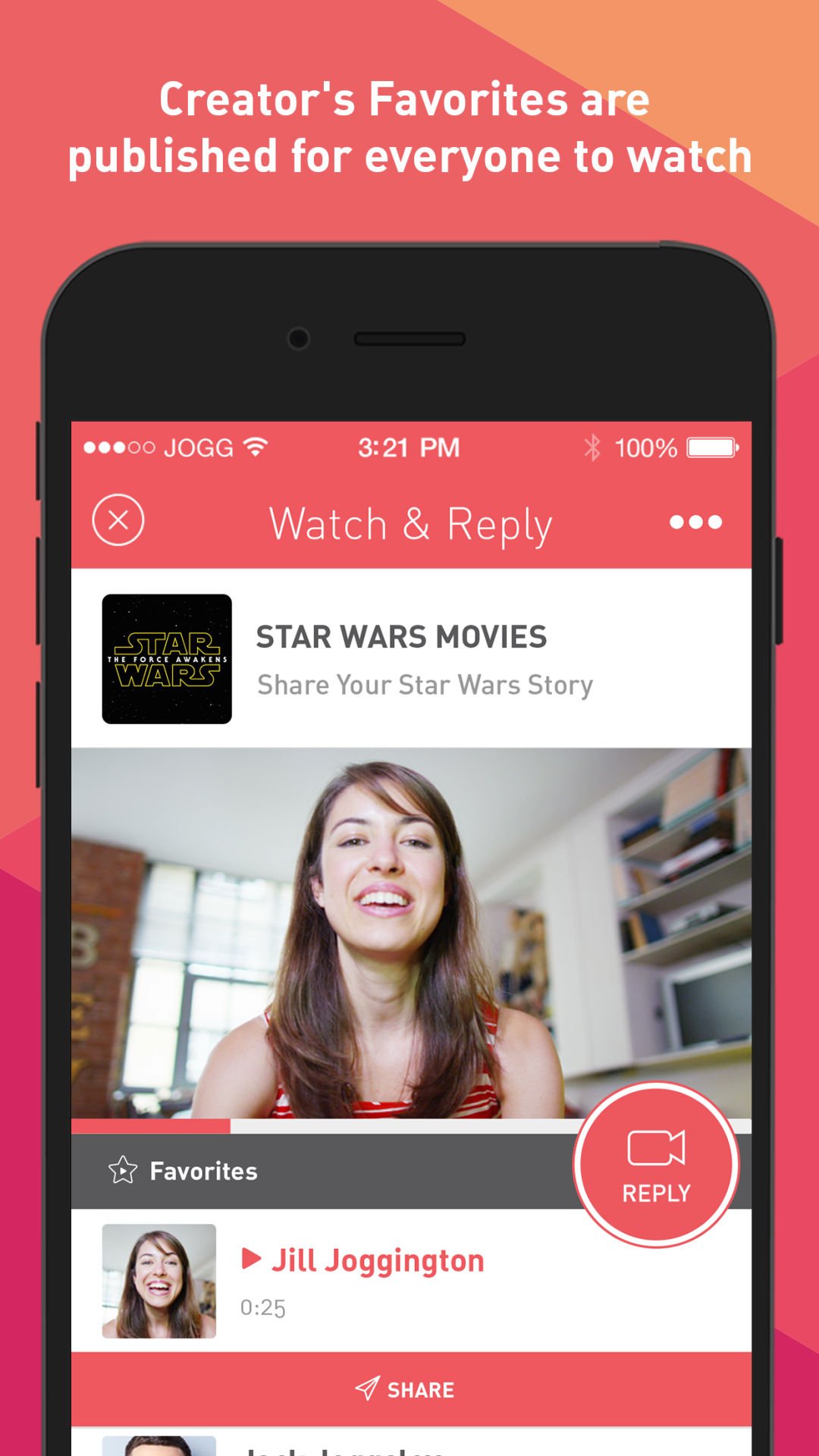 The video response app Jogg, shown above, is available on both iOS and Android devices.

It was an idea spurred from the struggles of the everyday filmmaker. Overwhelmed and beginning to realize how broken the system of filmmaking was, Chris Ordal, a 2005 University graduate and founder and CEO of the Jogg app, said he looked down at his phone one day at the airport, and it clicked.

Using this sudden epiphany, Ordal said he went on to build a mobile-video platform — one that is currently turning heads with major corporations.

It isn't the average Skype or Youtube app; what Jogg brings to the table is video-gathering at a whole new level.

Jogg, currently available on iOS and Android, allows users to reply to videos from their favorite celebrities or companies and have it enter a pool of potential videos, where they can be broadcast to the world if selected by the original poster.

For instance, Jogg is currently partnering with Disney for a "Star Wars" campaign set out to bring in fan videos that show what the Star Wars franchise means to them. Ordal said Jogg is a fast and ready way to engage with a mass audience that hasn't been tapped into before by an online platform.

"What’s cool is that 'Star Wars' posted a 55-second video, and I think there’s nearly an hour of video that was generated from that. So, if you put that in perspective of how much video people watch today and how expensive and consuming it is to create video, we’re generating compelling video for practically free," Ordal said. "That’s really the power of the platform. Not about numbers of views and hits — it’s about video content created at scale."

Not shooting to be the hottest app or having the most buzz is a different approach from many apps today, but Ordal said his intention is to build something that goes beyond the confines of the application.

"The app is just a consumer-facing side of our platform. What Jogg really is is the behind-the-scenes," Ordal said.

Behind-the-scenes, Jogg is currently in the process of bringing its capabilities to a massive scale. Endless encoding and integrating is being done in order to create a platform that is known for what it can do, not for just the name value, Ordal said.

"It doesn’t sound as cool, but the real power and value is that it's a form for video call-and-response," Ordal said.

He also said this call-and-response aspect is what initially brought him to start chasing this innovative idea.

Ordal, originally from Sioux Falls, S.D., graduated with a film degree from the University in 2005 and started a video production company in Lawrence. He collaborated with many filmmakers in the area, but eventually one of his films, 2009's "Earthwork," brought him and his family to Los Angeles.

However, Los Angeles wasn't all glitz and glamour. After an extraneous run of what Ordal described as "cheap flights, sleeping in airports, car rentals, screenings, Q&As, panels and parties," he had a realization while sinking in his own pile of equipment at an airport that got the wheels turning for what would be Jogg.

"If you think back to 2010 to 2011, the camera technology in mobile phones was really starting to be good," Ordal said.

"So I looked down to my phone one day and said 'If I could just prompt someone with a text message, and then their camera could pop up and the video they recorded can be sent back to me — so basically requesting video from them — I could conduct interviews without having to haul equipment across the country and travel and all the cost and energy that comes along with that'," Ordal said.

After over half a year of getting the right people in place to get this idea called Jogg to come to fruition, Ordal had a meeting with a tech start-up company called Techstars.

Cody Sims, a 1999 university graduate and now the executive director of the Americas for Techstars, was the one that got to meet with Ordal that day.

"At the time, Jogg was just a paper prototype of an idea, and Chris was more filmmaker than tech entrepreneur," Sims said. "But he was so passionate about the importance of video as a storytelling tool and so convinced that there was not the right product in the market to create dialogue between people over video, that I was convinced in our first meeting that he was going to build something special."

In 2014, Techstars brought Jogg under its wing.

Two years later, Jogg has worked its way into the public eye, hoping to revolutionize the way public figures speak to their audiences. Ordal said they already have many deals and activities in place with agencies and influential companies and hope to keep building Jogg to the best product possible.

"The two years or so [since starting with Techstars] has been about taking that initial idea and building out a massive platform that can work across all screens," Ordal said. "Also, acquisition of the rights and all kinds of things that giant corporations need the platform to do. That’s what we’ve built."