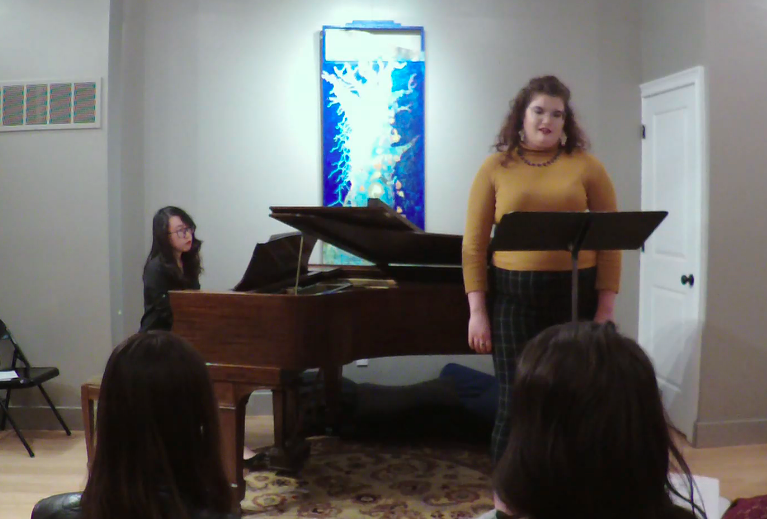 Using poetry written by Kansas writers, the students of Forrest Pierce's seminar in new art song are composing and performing brand new songs. The class will feature all of its new songs at a concert called “Making Waves” Saturday.

Pierce, a professor of music composition and a distinguished composer, has taught at the University of Kansas for 15 years, and this is the second time the class has been offered. Pierce’s class gives poets, composers, pianists and vocalists an opportunity to collaborate with each other through a unique process.

The process begins with Pierce’s selection of Kansas poets. When the first class started two years ago, Pierce chose poets who had a connection to Lawrence. This year, KU graduate students in the poetry department were asked to participate.

Student composers then choose poems with the permission of the poet. After the poems are chosen, the composer works to create an “art song,” which is a song often set to a poem. Pierce said it’s rare that an art song is a collaborative effort between the poet and the composer.

What’s created is the composer’s personal interpretation of the poem in music. Pierce also said that in art song, there is one voice and one piano. Unlike showy and character-focused opera arias, art song is about the words of the poem and tend to be more understated.

“A composer, traditionally, treats a poem kind of like a jewel — something that’s really beautiful in its own right — then tries to find a way in which a musical accompaniment can highlight some of the elements of the poetry that speak profoundly to the composer,” Pierce said. “It’s a kind of an act of love on the part of the composer.”

Once the music is ready, the student pianists and vocalists are given three to four days to rehearse before they perform for the class. The goal for the two musicians is to interpret both the poetry and the music and to express that interpretation in their performance.

“It’s so great to work with composers that are our peers and to get to help them with their craft. It’s helping us develop as musicians and performers of modern classical music,” said Emily Raese, a first-year graduate student studying vocal performance from Murrieta, California.

Megan Kaminski, a professor of poetry at the University and one of the participating poets, explained how surprising and exciting it can be for poets to hear their poems performed as a song for the first time.

“It’s really beautiful because they take on this different life,” Kaminski said. “I think about the poems, and I read the poems with a sense of their own music. Then when they’re interpreted by other people, by these amazingly talented musicians, they sometimes really capture the music that I had heard when I was writing it, but they also pick up on some things that I didn’t know were there.”

The seminar in new art song brought musical talents of all kinds together to create new songs, allowing the students to have a better understanding of their contemporaries and their processes, Pierce said.

“This project is about the collaboration of the students,” Pierce said. “I get to be an enthusiastic witness to what they are undertaking. They are exceptional songs, and they’re being interpreted with great sensitivity and skill by the musicians.”

Pierce said each of the 32 songs the students produced are at an “absolutely professional, publishable level.”

The concert will take place Saturday, Dec. 7, at 7:30 p.m. at the First Presbyterian Church in Lawrence. The event is free, but the class is welcoming donations.