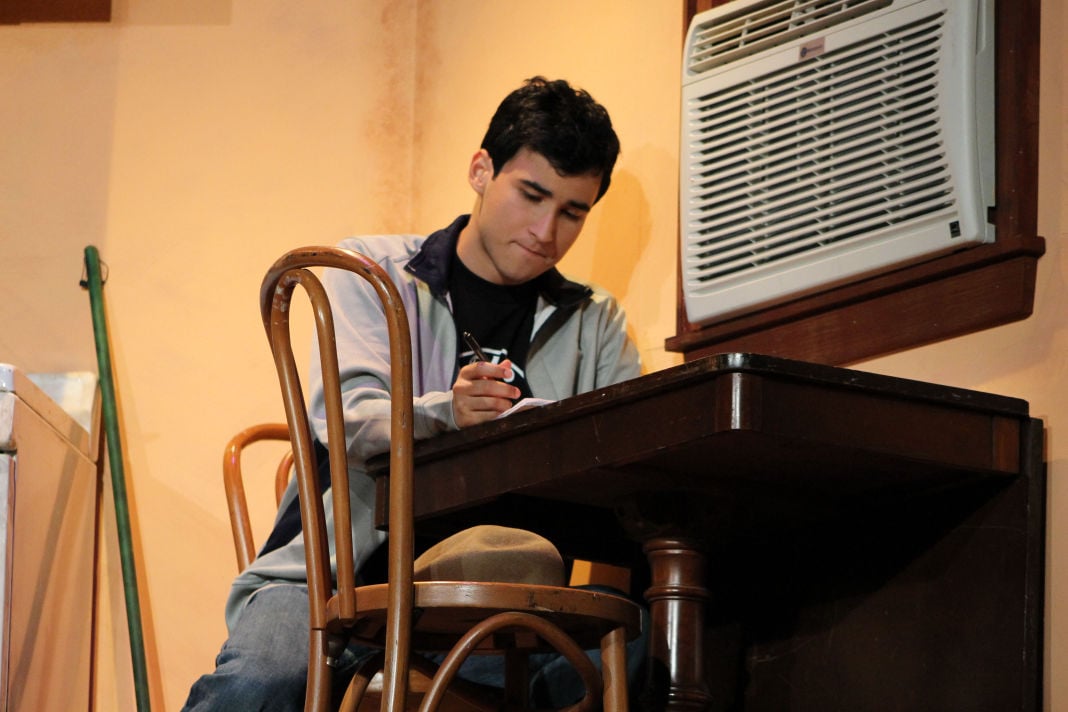 Juan Gonzalez’s character Alejandro Arroyo sits at his kitchen table in this apartment above his Lounge. 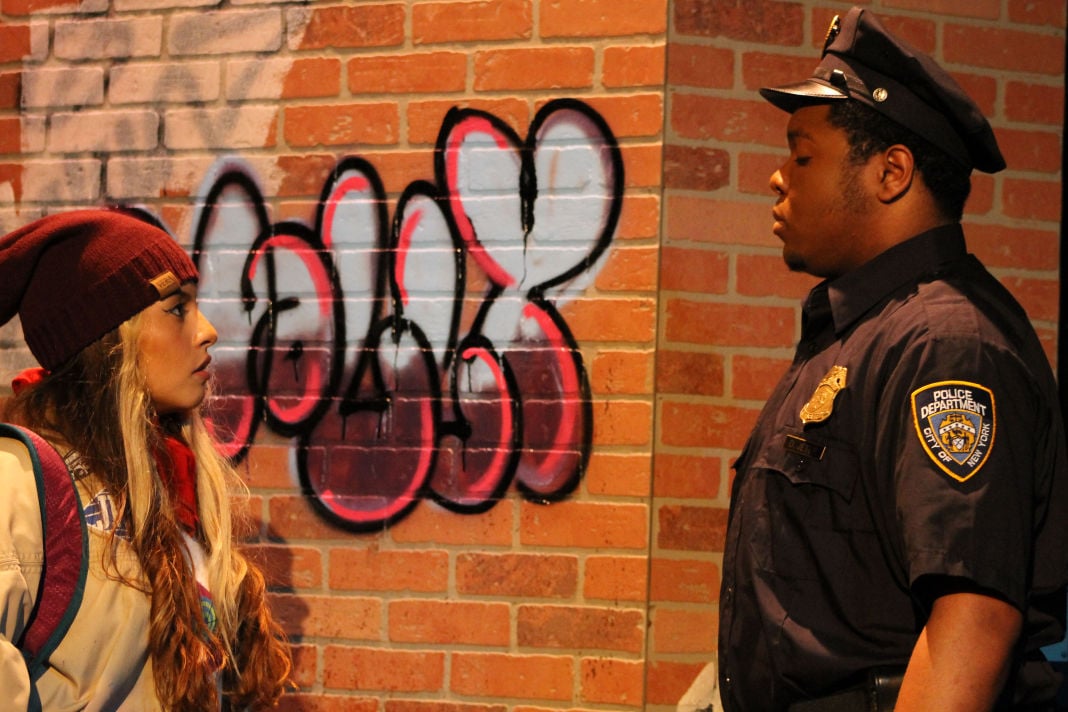 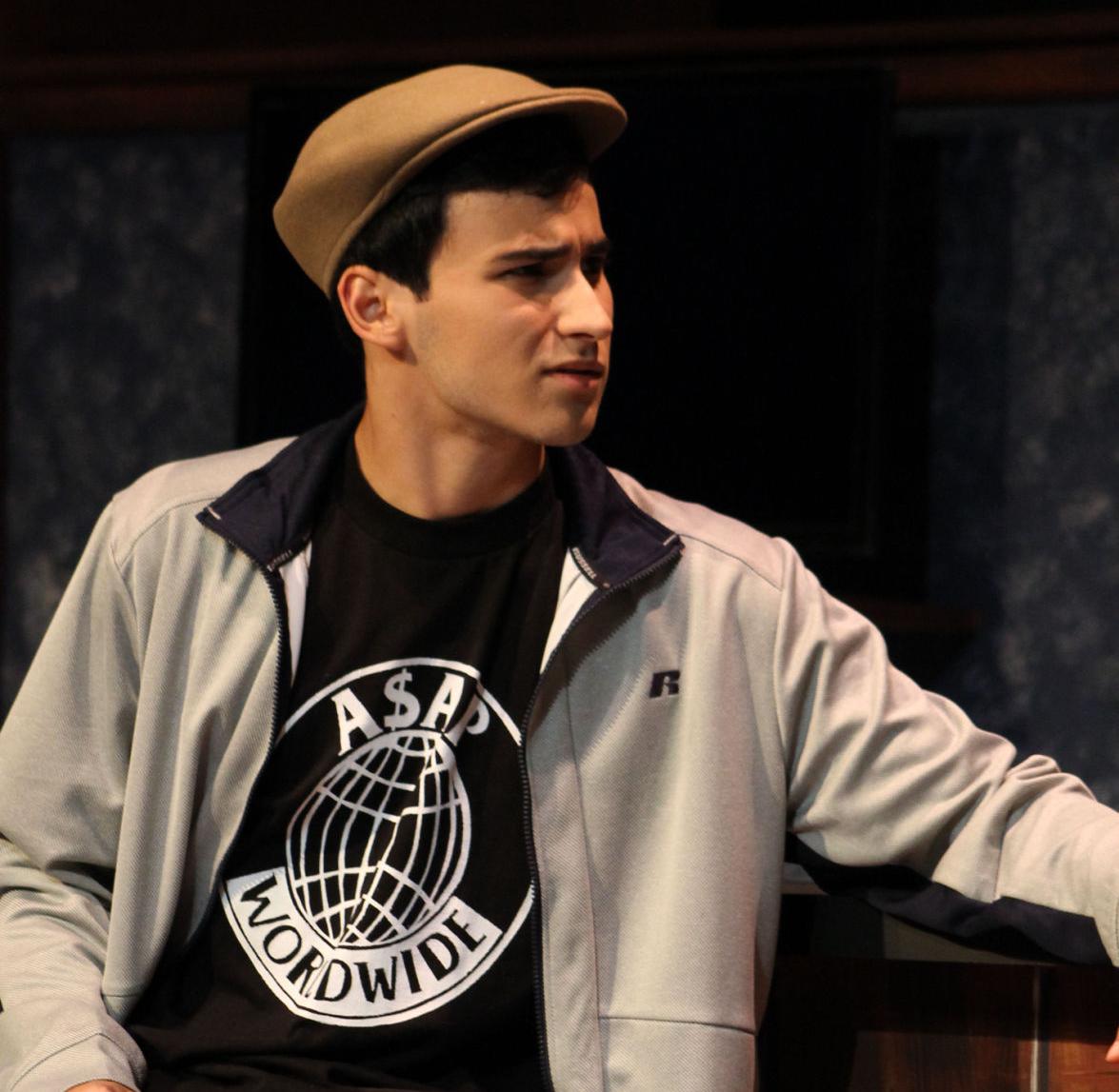 Alejandro Arroyo, played by Juan Gonzalez, sits at the bar top at the lounge he owns under his apartment. 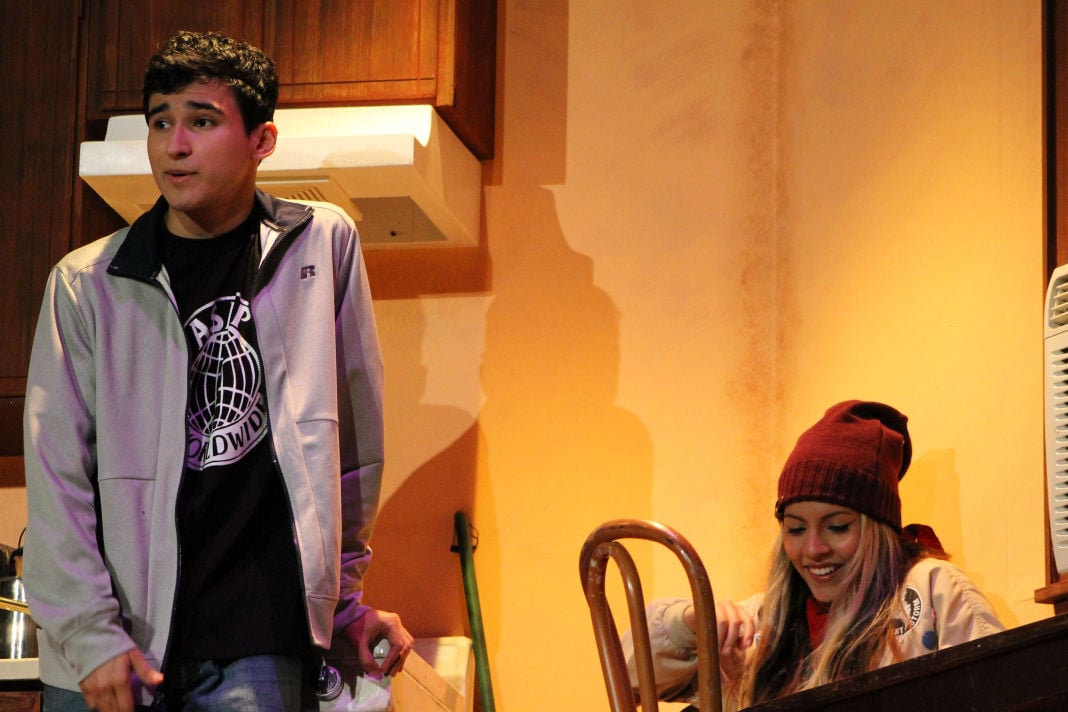 Alejandro Arroyo and his little sister Amalia, played by Juan Gonzalez and Alejandra Villasante respectively, have a discussion in their cramped kitchen above Arroyo’s.

Juan Gonzalez’s character Alejandro Arroyo sits at his kitchen table in this apartment above his Lounge.

Alejandro Arroyo, played by Juan Gonzalez, sits at the bar top at the lounge he owns under his apartment.

Alejandro Arroyo and his little sister Amalia, played by Juan Gonzalez and Alejandra Villasante respectively, have a discussion in their cramped kitchen above Arroyo’s.

Nicole Hodges Persley, associate professor of theatre, made a strategic decision this spring to produce the University Theatre's upcoming show, "Welcome to Arroyo’s." The play, written by Kristoffer Diaz in 2011, focuses on a brother and sister, Alejandro and Amalia (Molly) Arroyo, as they deal with the loss of their mother and discover that she may have been a key actor in the foundation of hip-hop in the late '70s.

The play takes place in the '90s and has allowed Persley to incorporate her academic interests in a way that both entertains and sparks conversations.

“I think that hip-hop offers us an opportunity to hear a lot of life narratives very differently in the sense that they’re not always linear narratives with a beginning, middle and end,” Persley said.

As an actress, director and producer, Persley has been trained to take an interdisciplinary look at cross racial and ethnic coalitions with a specialty in African-American performance. She has taken her time as a professor and director at the University to select and produce plays that she hopes will encourage not only conversation but action.

Persley said she hopes that when the audience sees an uncomfortable moment, they won’t turn a blind eye and walk away but understand that change happens when questions are asked.

“We’re never going to learn about each other if we don’t ask questions and if we don’t in turn have the willingness to answer those questions without judgement,” Persley said. “It’s okay to not understand why something is the way it is or how something might affect someone else differently; don’t be afraid to ask why.”

Persley's actors had very little exposure to hip-hop when they first began production of the play, and she said it was interesting to see how each actor brought their own style to their roles.

Juan Gonzalez, a senior from Overland Park who plays Alejandro, said he had no idea how to mold his character at first, having no experience with the hip-hop culture in his day-to-day life in Kansas.

However, Gonzalez said it was Persley's insistence that hip-hop was a medium for storytelling and could be applied to anyone’s life that made him come around to the art form.

“She really insisted that it was our music,” Gonzalez said. “Hip-hop isn’t for one ethnicity or for one generation but for anyone who wants to listen and for anyone to be inspired by. After we got over the initial uncomfortableness, we really grew together as a group. You don’t see theater kids shedding their gender or ethnic borders and really getting together like we have during this play. Hip-hop brought us together as a unit.”

Gonzalez also appreciated the value in the play allowing for nonwhite leads to be cast.

“Plays like this that are predominantly played by minorities are very underrepresented at the University, and I think it’s great for KU to be putting on a play like this,” Gonzalez said. “It definitely sends a message and, of course, allows for nonwhite students to be represented and to have a chance to perform a large role.”

One student, Nathan Kruckenberg, a senior from Wichita, said he was probably “a little too excited” for the upcoming play because of its heavy hip-hop themes.

“Hip-hop is a major part of my life since I was really young,” Kruckenberg said. “My buddies and I freestyle when they come over, and I literally listen to hip-hop and rap every single day.”

Kruckenberg, a newly-declared theater major, said he’s grateful to have a role in "Welcome to Arroyo’s" as his first big performance at the University Theatre. He portrays Trip Goldstein in the play.

“This is a really important story that shows a narrative that is strongly underrepresented in theater as a whole, not only at the University,” Kruckenberg said. “I’m glad that I could be a part of it and it’s been a really great experience for me, and I think the rest of the cast as well.”