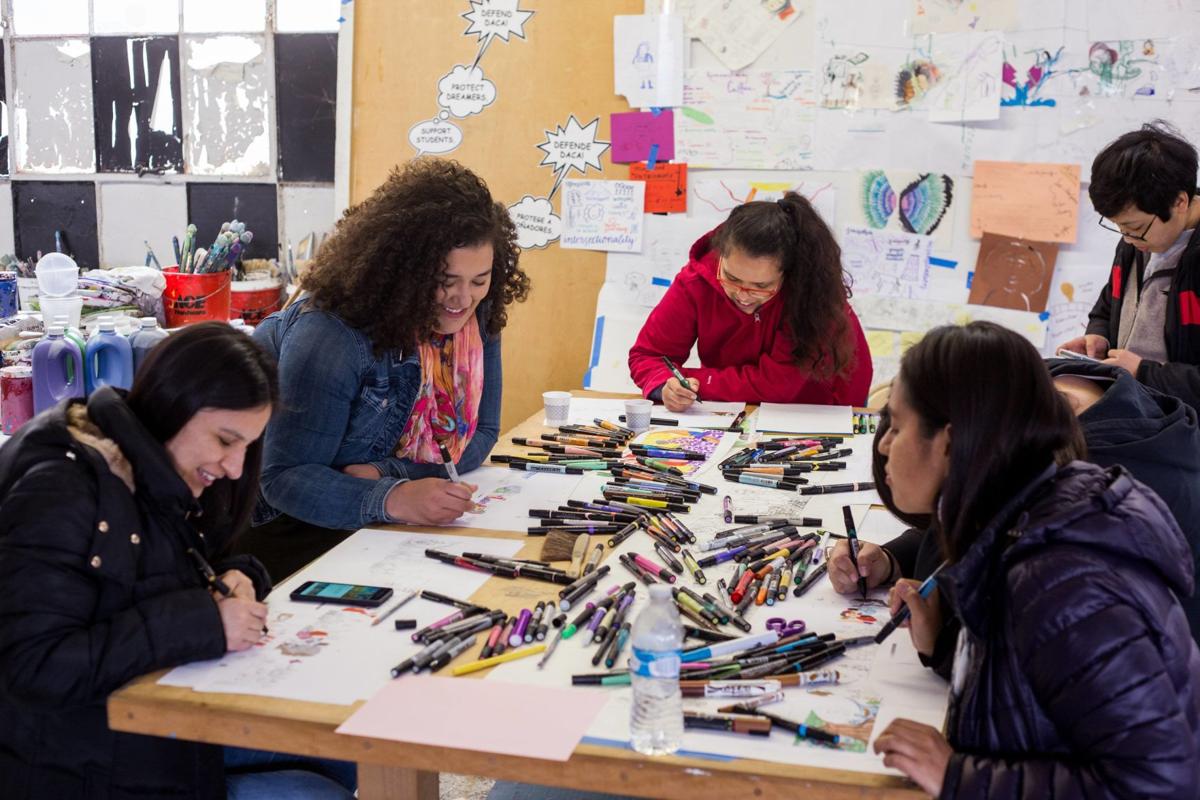 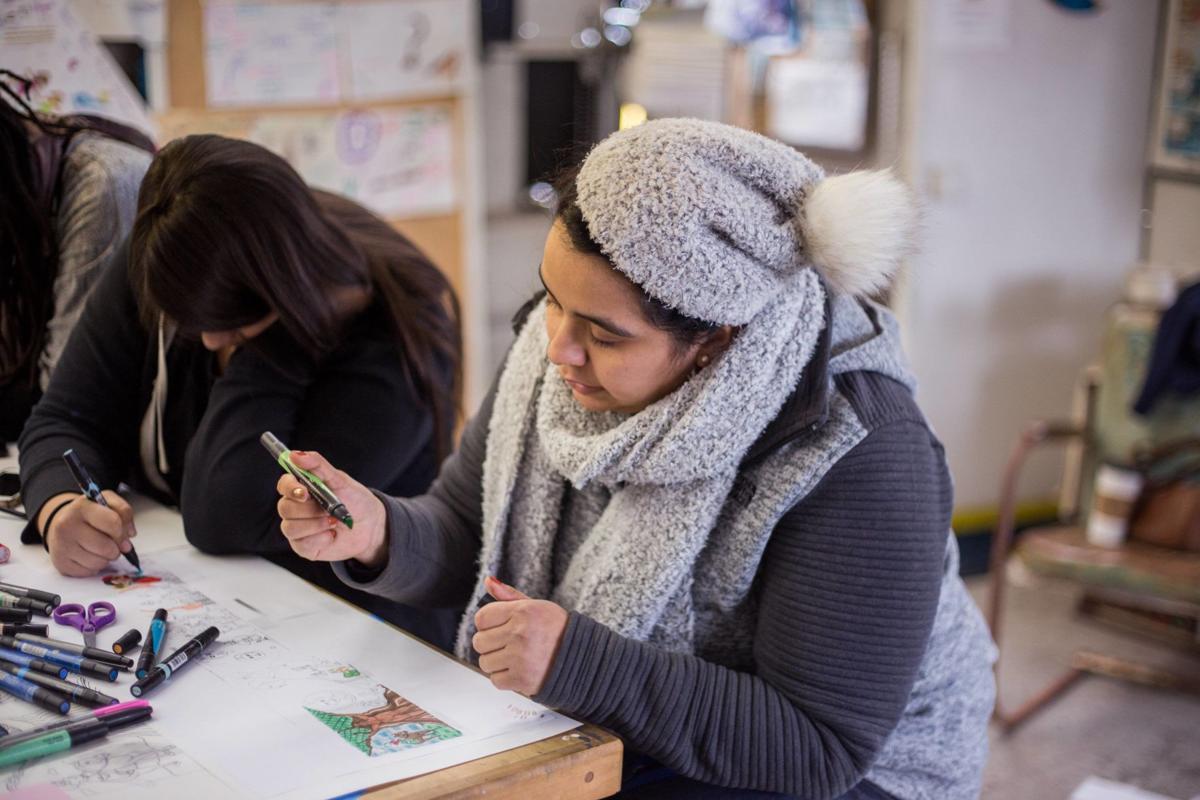 Marilyn Hinojosa is a Lawrence artist and University alumna. She is one of the artists behind the Wak’ó Mujeres Phụ nữ Women Mural.

The City of Lawrence gave final approval during an Aug. 7 city hall meeting for a mural representing women of color to be painted outside of the Lawrence Public Library. But the process actually started three years ago when a Lawrence resident didn’t see her Latina heritage reflected in the archives of the Watkins Museum of History.

“I wasn’t able to find women of color history of Lawrence on their displays,” artist Connie Fitzpatrick said. “I made an appointment to see their archives and their stack was pretty small of what they had [about women of color] compared to the piles and piles of other histories.”

In 2015, Fitzpatrick, current president of the NAACP’s Lawrence branch Ursula Minor and University alumna Grace Chin met in a library and started envisioning the idea for more representation of women of color in Lawrence. Because all of the women were artists, they figured art was the best way to deliver that representation to the city.

That was the the green light for the Wak’ó Mujeres Phụ nữ Women Mural (Kanza, Spanish, Vietnamese, English): Stories of Kansan Women of Color. The mural is a celebration of women of color in Lawrence across various ethnicities and linguistic ties. Anyone can help with the painting of the mural.

“Particularly concerning women of color, the arts are more accessible than academia and archives,” Fitzpatrick said. “I felt this was a more proper way of showing women of color history, especially being the fact that there’s such a small percentage of us who attend universities and have access to those resources.”

Scheduling conflicts stunted the project’s process, but it was reignited last year when Fitzpatrick met other women who were interested in pursuing the project last year. She teamed up with Marilyn Hinojosa, an alumna from the University, and together they were able to receive the Rocket Grant for the mural. Hinojosa eventually became the project’s lead artist.

Provided by the Spencer Museum of Art and the Charlotte Street Foundation, the Kansas City-based Rocket Grant supports unconventional, public-facing artwork in non-traditional spaces, according to the website.

Lead by Fitzpatrick, Hinojosa, University doctoral student Imani Wadud, Kansas City textile artist NedRa Bonds and University alumna Leah Evans, the project is composed of a team of about 20 women of color. Over the past year, the group has been working to collect oral histories of women of color in Lawrence for the mural.

The choice of location for the mural is on the outside walls of the Lawrence Public Library. Fitzpatrick said the library was an integral part of the project and aligned well with its mission.

“This project is about inclusion and histories and storytelling and what a better space to have it in a civic space that houses stories,” Fitzpatrick said.

However, the women did not expect the process to take this long. They expected to start designing the mural in May, but they’ve had to attend multiple city hall meetings to gain approval for the project, said Hinojosa.

“We’ve been working with community members and women of color who were dedicated to the project, and it was the type of project that we weren’t really sure how to even begin because there’s nothing like this that’s been done in the city,” Hinojosa said. “We didn’t know what they wanted from us.”

“For my team and the community members who’ve supported us, it was incredible to see the amount of work and collaboration from the support we were getting in spite of the incredible amount of opposition as well,” Fitzpatrick said. “It was well received.”

Less than 30 percent of University of Kansas students who study abroad are persons of color, a number that the University is looking to raise.

“I think we like to think that Lawrence is progressive and assume in general that the U.S. is progressive, but we’re learning that it’s not as progressive, and I think it’s just a great time to have those conversations,” Alvarez-Landa said.

The mural will feature paintings of matriarchs, such as textile artist Bonds and other women who were nominated to give their history to the team, but most of the mural will just be representations of women of color in the area.

“It’s important for people of color to connect with a certain space and feel welcomed,” Fitzpatrick said. “To see their features on the wall, I believe is the beginning of seeing representation of the diversity of our city.”

“A big aspect of this project is to show people that you don’t have to be a historian to discover your own history,” Fitzpatrick said. “In order to represent the history of people of color, the present needs to record the past in spite of academia and titles that are usually necessary for doing those kinds of works.”

Local entrepreneur Crystal Swearingen has began a new magazine, The Spot, after not seeing ample presentation of women in business in other local magazines.