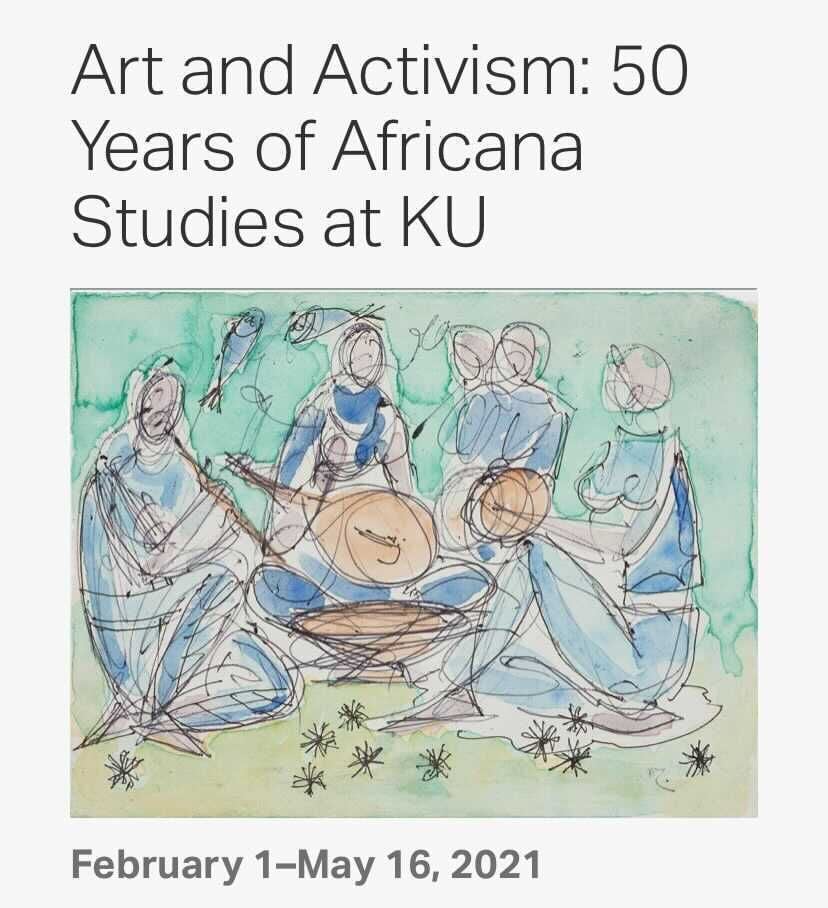 The Spencer Museum of Art is displaying Art and Activism: 50 years of Africana Studies at KU to celebrate 50 years of AAAS at KU. 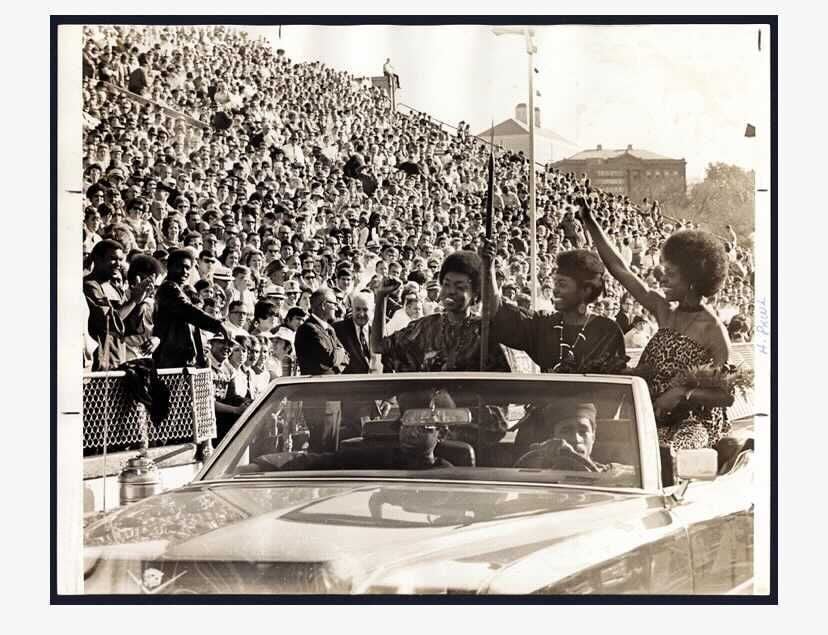 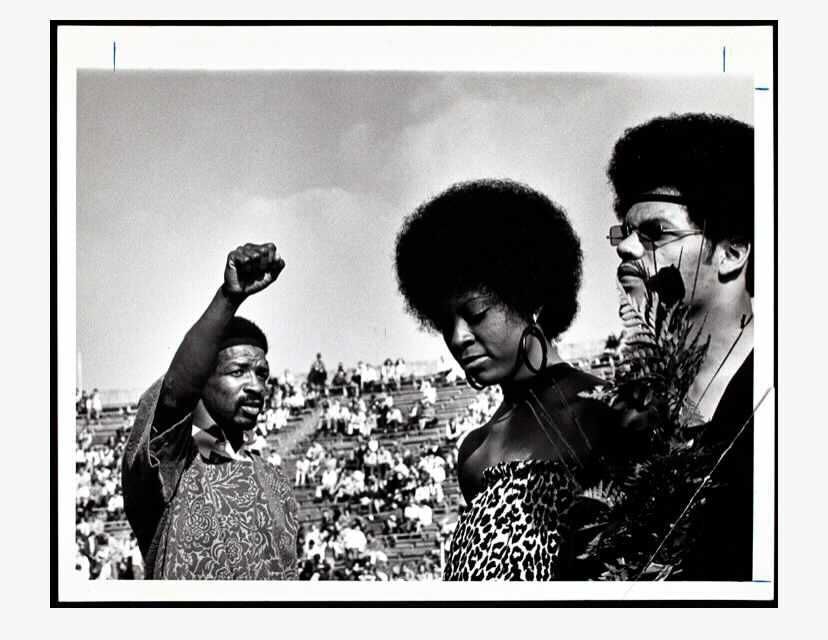 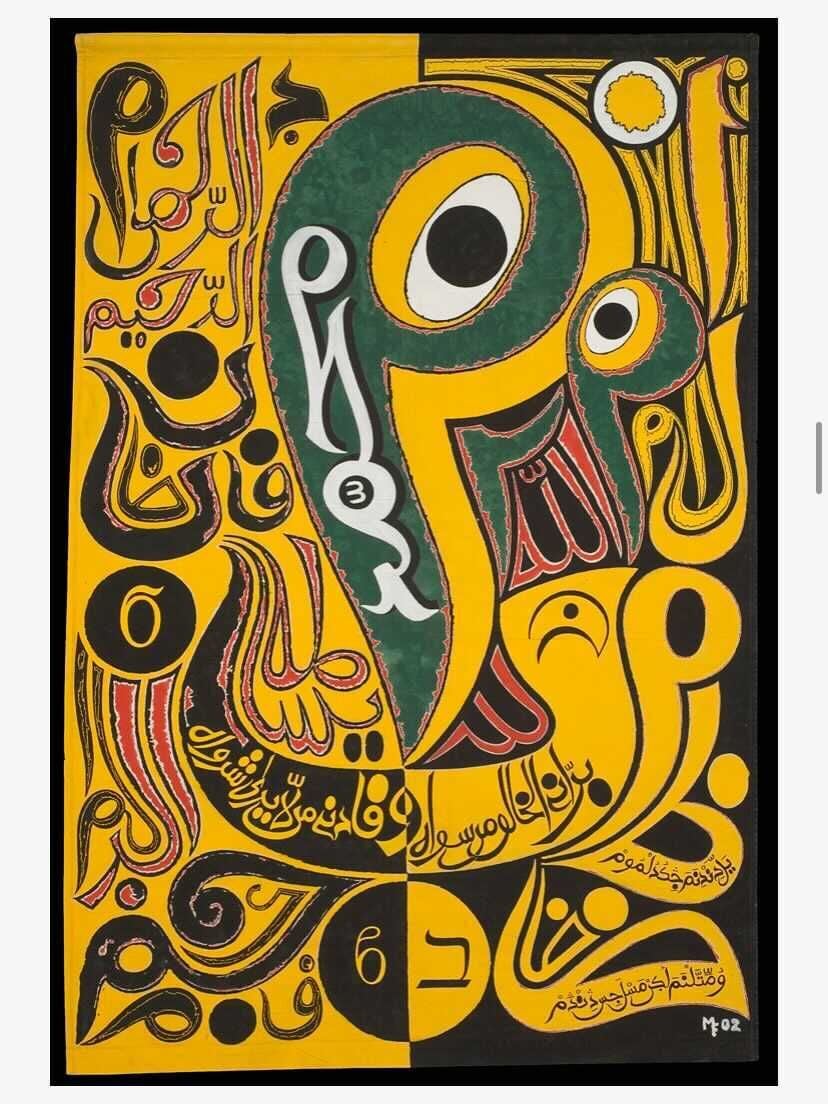 This wall hanging depicting village life, featured in the student section of the exhibit, is from the Pope-Ellis School of Weaving. It was donated by Anne Hart. 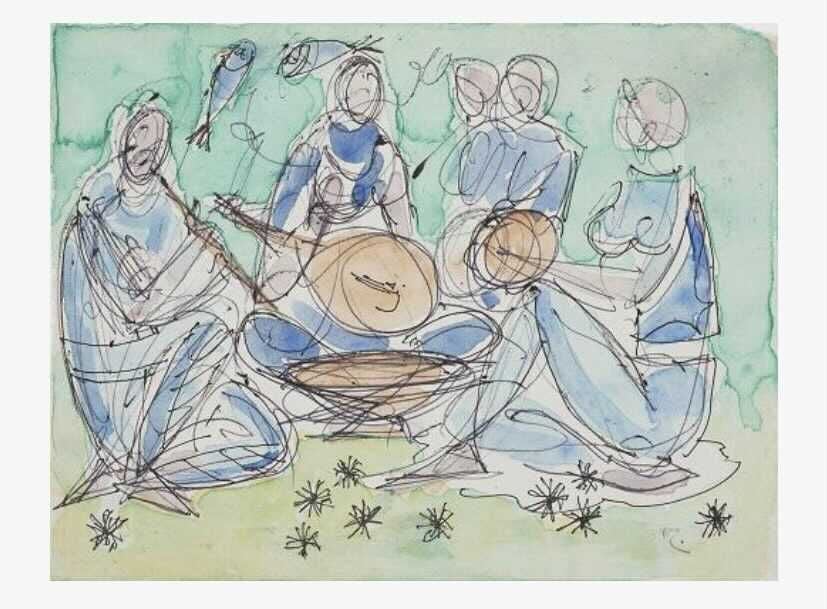 This untitled piece was made by Jellal Ben Abdallah in the 1980s. It was made with watercolors, pencil and paper. It was donated by Amin Bouker.

In honor of 2020 marking the 50th anniversary of the Department of African and African American studies at KU, The Spencer Museum of Art is featuring a virtual exhibit titled--Art and Activism: 50 years of Africana Studies at KU.

The exhibit, as well as other AAAS anniversary commemoration events, were originally planned for the fall of 2020, but were postponed due to the pandemic.

The exhibit is centered around four thematic groups--origin, students, faculty and community. The groups explore the history of Black activism and cultural change on campus, highlight the relationship between AAAS studies and the Spencer Museum of Art, and feature the power of art in activism and political conflict.

“It was a challenge to try and organize it online in a way that would be dynamic and reflect the different facets of research with the museum…..The idea was to center student research and connect it back to the history of student activism that started the push to create a more comprehensive and inclusive curriculum,” said Jessica Gerschultz, AAAS  associate professor and curator of the exhibit.

Efforts to create the exhibit began in March of 2020. Gerschultz brought the online exhibit to life with the help of her spring 2020 African Design class as well as Angela Watts, the Spencer Museum of Art collection manager.

Gerschultz’s students completed in-depth research and took trips to the museum to determine the pieces that would be featured. Her students also completed the object labels that are featured in the student section of the exhibit.

“When I first met with the class I pulled textiles, basketry, ceramics, metalwork, and sculpture. I was able to show them just how broad the collection is and hopefully inspired them to find something that they were interested in,” said Watts.

Although the virtual format was not in the original plans for the exhibit, it did end up allowing for a more expansive collection to be shown in a safe manner.

“One of the things that's really great, from my perspective of conservation and preservation, is that when you do an online exhibition, it’s a safe way to share our art," said Watts. "It also increases the number of artworks we can show.”

The Spencer Museum houses nearly all the pieces chosen for the exhibit. Their African art collection has over 1900 works. A major contributor to this collection is former AAAS Professor Emerita Beverly Mack. Mack donated 228 pieces of her personal collection to the museum.

“Some of my favorite works that we highlighted in the exhibit came from professor Beverly Mack...She met with me several years ago, back in 2011, and she had a really large collection of works from Nigeria that she had collected while she was doing her fieldwork, and she offered to make a donation to the museum,” said Watts.

While the majority of the exhibit features pieces from the museum’s collection, the origin section consists of archive images from the Kenneth Spencer Research Library’s online exhibit 1970: The Year that Rocked KU.

“We looked at another exhibit, the 1970: The Year that Rocked KU exhibit….. It [the origin section of the exhibit] was really about the activism of Black students and the Black Student Union on campus that drew attention to curricular issues, social justice issues on campus and in the community,” said Gerschultz.

This exhibit is not the first collaboration between the AAAS department and the museum.

“The Spencer Museum has a really rich collection of art from Africa and the African diaspora, and so that has been really important to us in order to help facilitate this relationship with AAAS. We have been able to work a lot with classes. That has been really rewarding for us,” said Watts.

African and African American art in general, inside and outside of the museum, is a significant part of the AAAS department and curriculum.

“For me, as an art historian, art plays the most central role in the courses that I teach. The AAAS department utilizes art in portraying culture, politics, and social change of the past."

In the department in general, the arts are quite central to our curriculum,” said Gerschultz.

To further celebrate the 50th anniversary of the AAAS department, a larger commemoration event will be held in April. Dr. Dorothy Hines, an AAAS and School of Education professor, spoke on the characteristics of the department that have allowed it to prosper for half a century.

“Our department is not just about teaching and learning. It’s about advocacy, it’s about activism, and it’s about actually changing the way that we see things...We want to be a hub for people to learn about the true experience of Black people," said Hines. "Not just the struggle, but also about Black joy, Black liberation, as well as Black upliftment.”