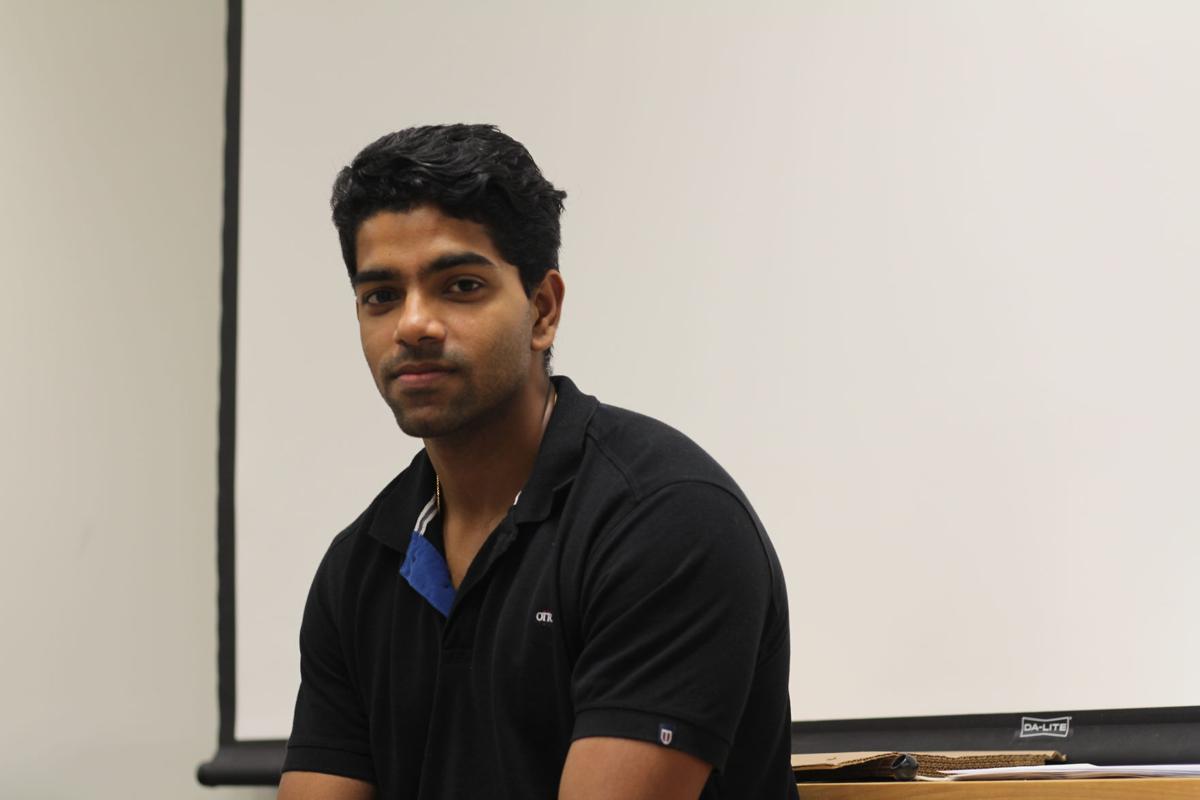 Nikhil Biju, a first year graduate student at the University, came to the United States 15 years ago. Now, he's fighting to stay with his family. 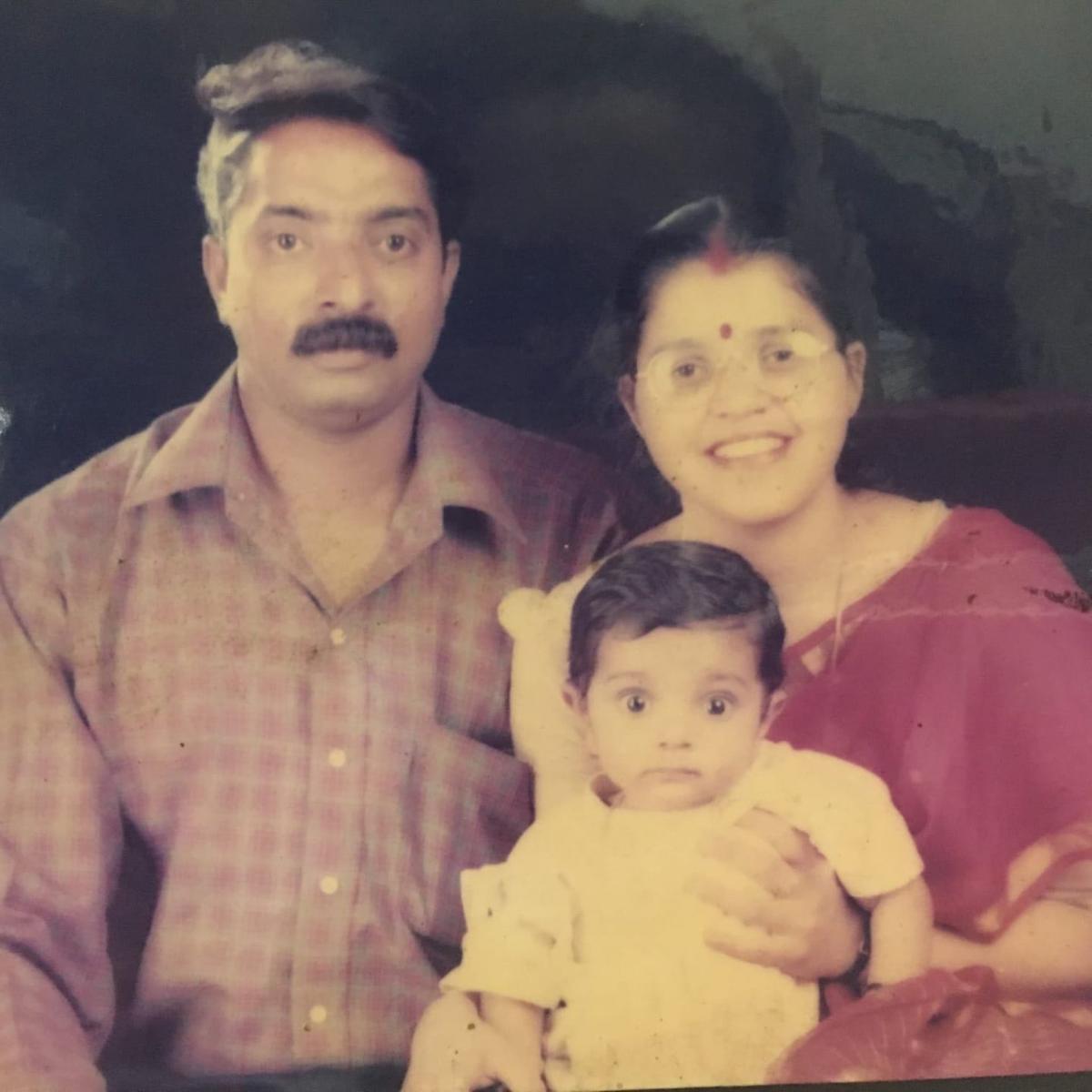 Nikhil Biju at age 1, with his parents Biju Thankappan and Shyla Biju. 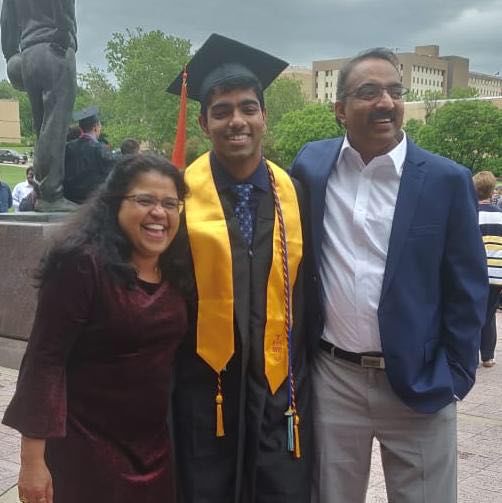 Nikhil Biju (center) with his parents Shyla Biju and Biju Thankappan after his graduation ceremony in May 2019.

Nikhil Biju with his parents Biju Thankappan and Shyla Biju in summer 2019.

When Nikhil Biju’s family immigrated to the United States in August 2005, they came in search of opportunity.

His mother, Shyla Biju, worked as a schoolteacher in India for more than a decade, but she longed to accept the challenge of working as a public schoolteacher in the United States. When she was offered a job for Topeka Public Schools and received an H-1B work visa, she was thrilled.

Nikhil, an undergraduate at the University of Kansas at the time, was about to turn 21 years old — the year his legal residency would expire in the United States.

Although the H-1B visa held by Shyla could be renewed on a continuing basis, H-4 visas held by child dependents expire the moment they turn 21.

Nikhil is one out of an estimated tens of thousands of H-4 child dependents who face the prospect of either self-deporting or applying for a new temporary visa to maintain their legal status, said Julia Gelatt, a senior policy analyst at the Migration Policy Institute.

They fall into the category of “legal dreamers” — children whose parents are temporary immigrant workers and who have spent most of their lives in the United States. Most of them grew up thinking of themselves as Americans but are afforded no simple legal pathway to permanent residency, much less citizenship.

As one of those dreamers, all Nikhil wants is to stay in the country that has afforded him and his family opportunities he said he wouldn’t have received anywhere else.

‘Why is my kid struggling?'

Nikhil, just 6 years old at the time he came to the U.S., said he struggled to connect with his new peers in the United States. Shyla said she was forced to adapt to a different teaching environment.

But the family was committed to assimilating. It wasn’t until Nikhil was enrolled as an undergraduate at the University that the family considered going back.

“It didn’t really hit me until I came to college when my parents sat me down and kind of explained to me the situation that I was in,” Nikhil said.

Shyla and her husband, Biju Thankappan, applied for permanent residency in 2014, hoping to secure their family’s legal status before Nikhil aged out of his visa. Uncertain of whether they would actually receive it in time, they had to come up with a backup plan.

“I told Nikhil this could be a challenge,” Shyla said. “We may or may not get the green card, so the best bet is if you could complete undergraduate in three years.”

The family decided their plan: Before completing his undergraduate degree in mechanical engineering, Nikhil would apply to graduate school at the University. Then, he would apply for an F-1 student visa.

“I had no idea what I was getting myself into,” Nikhil said.

He found himself enrolled in as many as 23 credit hours a semester to stay on track for an early graduation. All the while, he stayed as involved as possible in clubs and extracurriculars to bolster his resume for future employers. It led to many sleepless nights, Nikhil said, and a lot of stress.

Nikhil often found himself unable to go out with friends on weekends or school nights. Instead, he devoted most of his time to studying.

As pressure mounted on him, it also affected his parents.

Aside from recognizing the stress of their son’s course load, his parents weren’t certain Nikhil could remain legally in the country until he received his F-1 visa. His family hired an immigration attorney and contacted KU International Support Services.

ISS staff, however, was limited in ability to assist.

An international student adviser at ISS was among the primary advocates Nikhil worked with in preparation of his change from H-4 to F-1 status.

Two years earlier, that adviser handled a case similar to Nikhil’s, in which a student filed for a new visa well before they aged out. That student received a denial notice just days after they turned 21.

To make sure Nikhil did not meet the same fate, his attorney also filed for an international tourist visa.

According to the American Immigration Council, 86% of H-4 visas in 2017 were issued to family members of foreign workers from India. Federal law, however, mandates that no more than 7% of the total green cards issued in a year can be distributed to immigrants from a specific country.

An increasing number of applications for a limited number of green cards has resulted in continuously increasing waitlists.

Indian immigrants like Nikhil have been hit especially hard by seemingly endless backlogs. Some who apply for green cards today will have to wait decades for a decision, according to the Cato Institute.

“I think it’s a problem that’s possible to solve, but it would take Congress passing legal immigration reform … and Congress has shown a real reluctance and inability to get bipartisan agreement to change our immigration laws,” Gelatt said. “This is one of many, many issues in our immigration system that will need to be addressed when Congress finally has the will to reform our laws.”

Shyla said she still struggles to understand the logic behind her family’s situation.

“There should not be a reason the kid who grew up here, who went to school right from elementary, that now you are treating him as a brand new kid who just came here from another country,” Shyla said.

“I’m a public school teacher,” Shyla said. “I am teaching challenging kids since 2005. So, when I’m serving kids in America, why is my kid struggling?”

Nikhil’s F-1 visa application was approved, but his fight to remain in the United States is far from over.

Now in his first year of graduate school at the University, he only has a matter of years before graduation, at which point he will likely pursue the most viable route of permanent residency by seeking temporary sponsorship from an employer.

“Now he is back at ground zero,” Shyla said. “He has to start everything from scratch now.”

Nikhil’s peers note that despite his struggles, he only seems to have grown into a more positive, resilient person.

Clay Meyers, a senior from Kansas City, Kansas, said he has been close friends with Nikhil since they met the first week of their freshman year of college.

“I couldn’t understand how he kept staying so hopeful throughout the whole thing,” Meyers said. “He never has self-pity or felt bad for himself. He just used that to motivate him.”

Much of that positivity stems from Nikhil’s belief that he is living a better life here than he would be anywhere else.

“When I talk to my cousins in India, the opportunities they have are so limited to what I have right now,” Nikhil said.

Nikhil’s family remains hopeful its situation will improve, but with limited time and resources, its ability to advocate for change is equally limited.