University of Kansas leadership broke down which entities on campus were incorporated into its estimated $120 million loss for the current fiscal year in an email to faculty, staff and graduate students Thursday.

KU officials previously estimated the institution would lose nearly 26% of its general use operating budget because of the coronavirus pandemic. In the spring, KU canceled all in-person instruction halfway through the semester. Entities such as KU Parking and KU Student Housing lost money, as students departed from campus.

Core operations, which include general tuition, course fees and state appropriations, are projected to account for about $87 million of the budget shortfall, Provost Barbara Bichelmeyer and Chief Financial Officer Diane Goddard wrote in an email.

“We expect these units to have a revenue shortfall again in FY21, as, for example, Student Housing will not be able to cover the full cost of operations given limitations on resident capacity required in order to provide physical distancing,” KU leadership wrote.

KU projects it will lose about $19 million in housing, recreation services, parking and Watkins Health Services, and roughly $14 million in KU affiliate services, such as the Kansas Memorial Union.

Those numbers are contingent to KU returning for in-person classes during the fall. But if in-person instruction is canceled, KU officials anticipate “the shortfall will increase significantly.”

KU also announced it lost $35 million from fiscal year 2020 from parking, student housing and dining. These entities used money saved in its reserves to carry through the loss, but now those funds have been used up. Those units will not be able to use reserve balances moving forward.

KU listed an additional $30 million in expenses so it can roll out new health and safety measures to mitigate the spread of COVID-19 in the fall. The expenses include providing personal protective equipment, increased sanitation, coronavirus testing and contact tracing, and designated quarantine and self-isolation spaces. 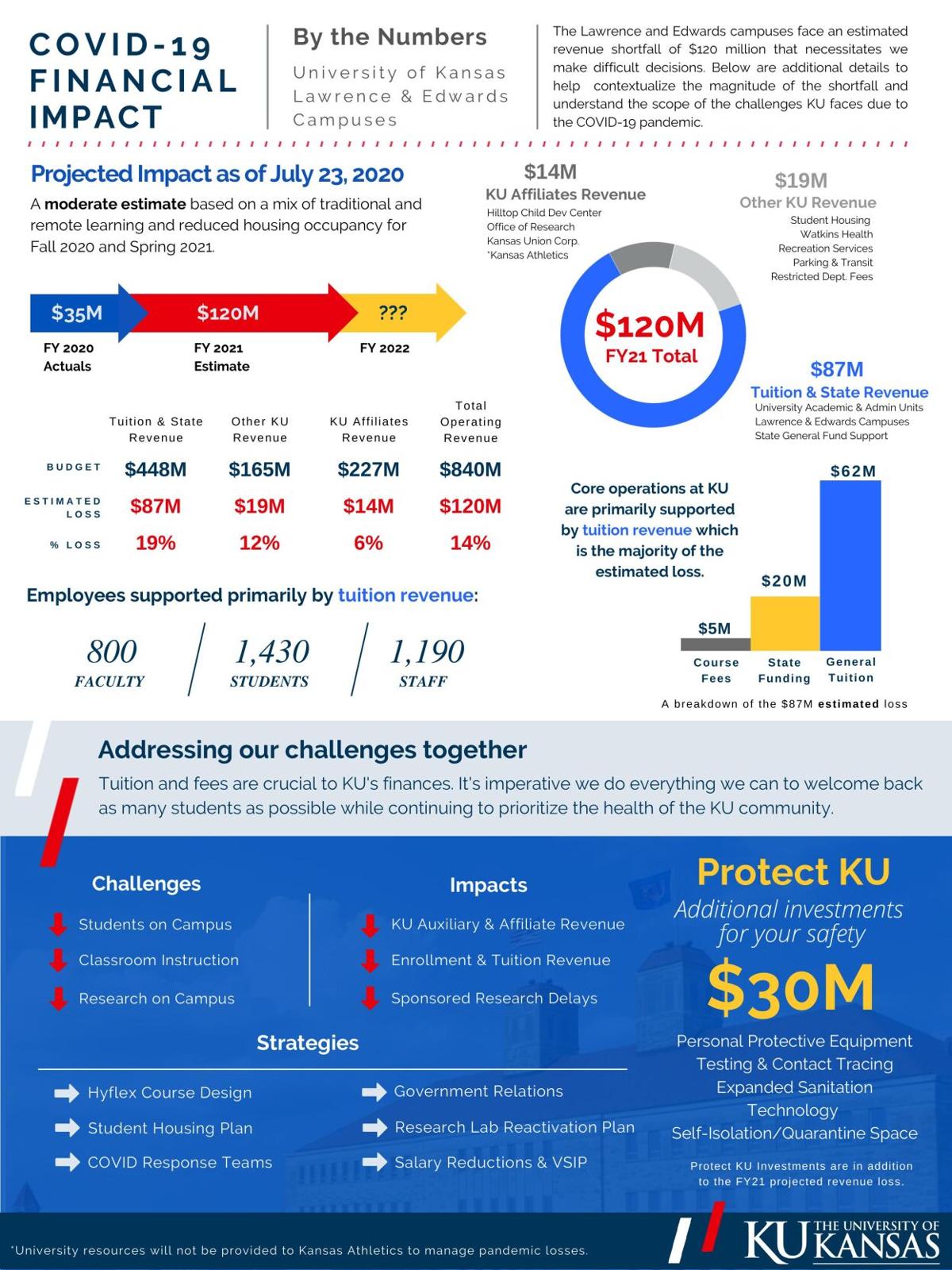 “Now more than ever, there is a direct link between our enrollment and our ability to retain employees,” Bichelmeyer and Goddard said. “This is one of many reasons why we have dual responsibilities to continue to prioritize the health of our community members, while at the same time doing everything we can to enable students to continue their studies at KU.”

About 800 faculty members, 1,430 student workers and 1,190 staff members are supported primarily by tuition revenue, according to a graphic included in the message.

And it’s likely the $120 million budget shortfall will not be a one-year challenge, KU leadership said.

“Given the magnitude of our financial situation, we will need to continue making difficult decisions for the foreseeable future,” the email said. “The reality is that the University will continue to be in a vulnerable financial situation as we navigate this unprecedented crisis.”

The Graduate Teaching Assistants Coalition at the University of Kansas filed four charges with the Kansas Department of Labor against KU for violating a memorandum of agreement that was negotiated in 2018.