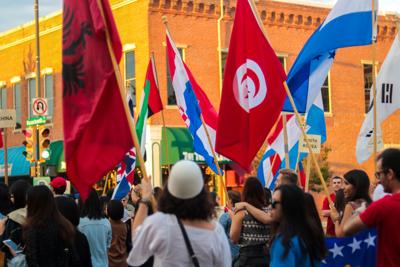 The proposal held tuition and fees for all students flat, except the international student fee.

The letter to KU administration was written by several international students. Thirty student organizations and Student Senate co-signed the list of demands.

“We feel that the University is exploiting and alienating us … exacerbating divides between students domestic and international already present in the Jayhawk Community,” students wrote in the letter. “We implore the University to treat us better and embody the values of Diversity and Inclusion that KU has proclaimed as paramount.”

University administrators say the increase was necessary. The International Student Services Office, which supports international students and is funded by the fee, faced significant cuts in the previous fiscal year.

"I am so glad students are raising their concerns on this as their voices are critically important," said Charlie Bankart, associate vice provost for International Affairs. "They are heard and we see them." 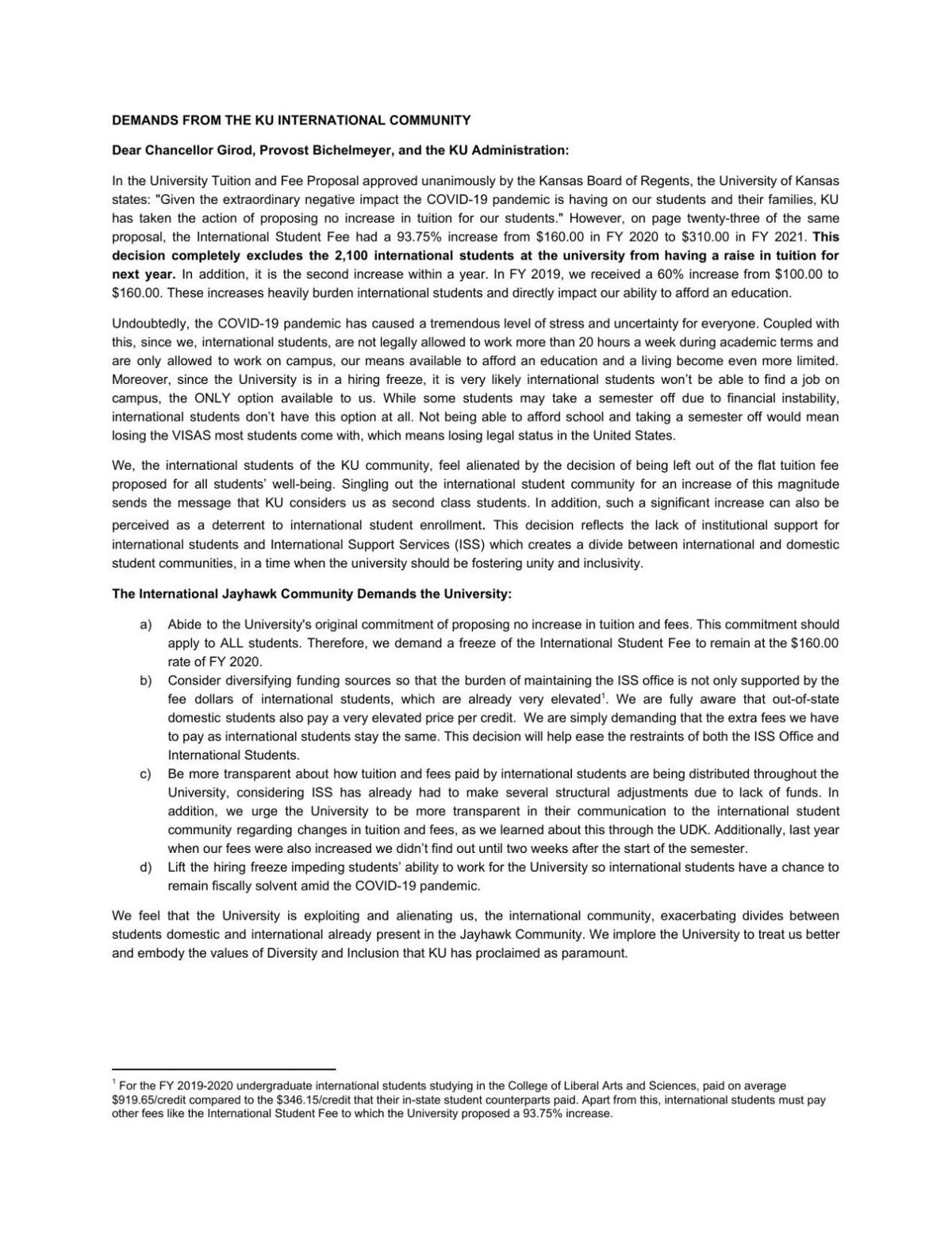 Students also started a petition on change.org with the same list of demands. By Tuesday afternoon, it had over 1,600 signatures.

"The University cannot say that they care about everybody in the pandemic, and how it's affecting everybody, and then hit the people that don't even have familial resources in the country," said Hollie Hall, a KU graduate student from London who co-authored the letter.

Hall, a Ph.D. student in the Department of Educational Leadership and Policy Studies and president of KU International Grads, said the increase is particularly harmful, since many international students already face obstacles financially and with immigration status.

International students are only allowed to work 20 hours per week, and can only be employed on campus, said Humberto Gomez Salinas, a senior from Santiago de Querétaro, Mexico, and director of diversity and inclusion for Student Senate.

There's uncertainty about the campus jobs international students rely on, since KU is in a university-wide hiring freeze because of the financial implications of the coronavirus pandemic.

"If you're not able to prove that you can afford the University, even if you're a couple of dollars short, they may not let you into the country," Gomez Salinas said.

Sarif Tusuubira, a doctoral student in the Department of Ecology & Evolutionary Biology from Kampala, Uganda, agreed it feels unfair for KU to keep tuition and fees flat for all students except international students.

"It makes it seem like we ... are not considered students of KU, because we don't fall in with all students," Tusuubira said.

Jessy Ayestas, a Ph.D. Candidate in Educational Leadership and Policy Studies from Honduras, said she feels alienated by the decision.

"Being alienated or being singled out from this idea that the University wants to remove burdens from students, and having international students be put in a separate category … it's wrong," Ayestas said.

Hall thinks it's unfair that international students alone fund ISS, especially since other student fees pay for resources not used by all students.

Declining international enrollment and the financial impact of the coronavirus pandemic has left fee revenue inadequate to fund ISS, Bankart said. In past years, revenue from the Applied English Center helped cover costs, but enrollment decline at the AEC and the lowering of AEC tuition “had an enormous financial impact.”

“This was a painstaking process, and one we did not want to undergo,” Bankart said. “We know this is a very difficult time for everyone and unfortunately, holding the International Student Fee constant for so many years to keep costs to students down has meant a more significant increase now.”

In 2012, when Hall first came to KU, the international student fee was $40 per semester, according to the 2012-2013 comprehensive fee schedule.

In past years, international students paid a flat fee each semester, including the summer. The summer fee now reflects that summer is only eight weeks long, Bankart said. Students enrolled in summer semesters going forward will pay roughly half the amount of fees typical for the spring and fall semesters if enrolled full-time, and a per credit hour amount if enrolled in fewer than six hours.

“Our number one priority is our students – always,” Bankart said, “and I am saddened that a fee increase is needed to ensure we maintain our focus on that core priority.”

Bankart said despite the increase, the fee for international students at KU is low compared to other universities.

Although these numbers are lower on the surface, the fee structure and the structure of the international student services office varies at each university, Bankart said. For example, at some universities, the flat fee per semester may be lower, but students may be charged more for individual services. Plus, the size of the international student population, work demands and the office staff size also need to be taken into consideration.

The student fee at KU is set annually by Student Senate, approved by the chancellor and then presented to KBOR. For the international student fee, a proposal is made by International Affairs to the Provost’s Office, then submitted to KBOR, Bankart said.

The student fee paid by all students was held flat by Senate for next year at $491.95. Senate originally approved a fee increase of $15 per semester, but then revised the proposal after Chancellor Douglas Girod asked them to keep it flat.

"[The increase] goes directly contrary to what the University put out at the beginning of the pandemic," Student Body President Apramay Mishra said. "The messaging was to hold tuition flat in order to ease the burden on students, and raising fees on one specific group of students just at its very nature seems wrong.