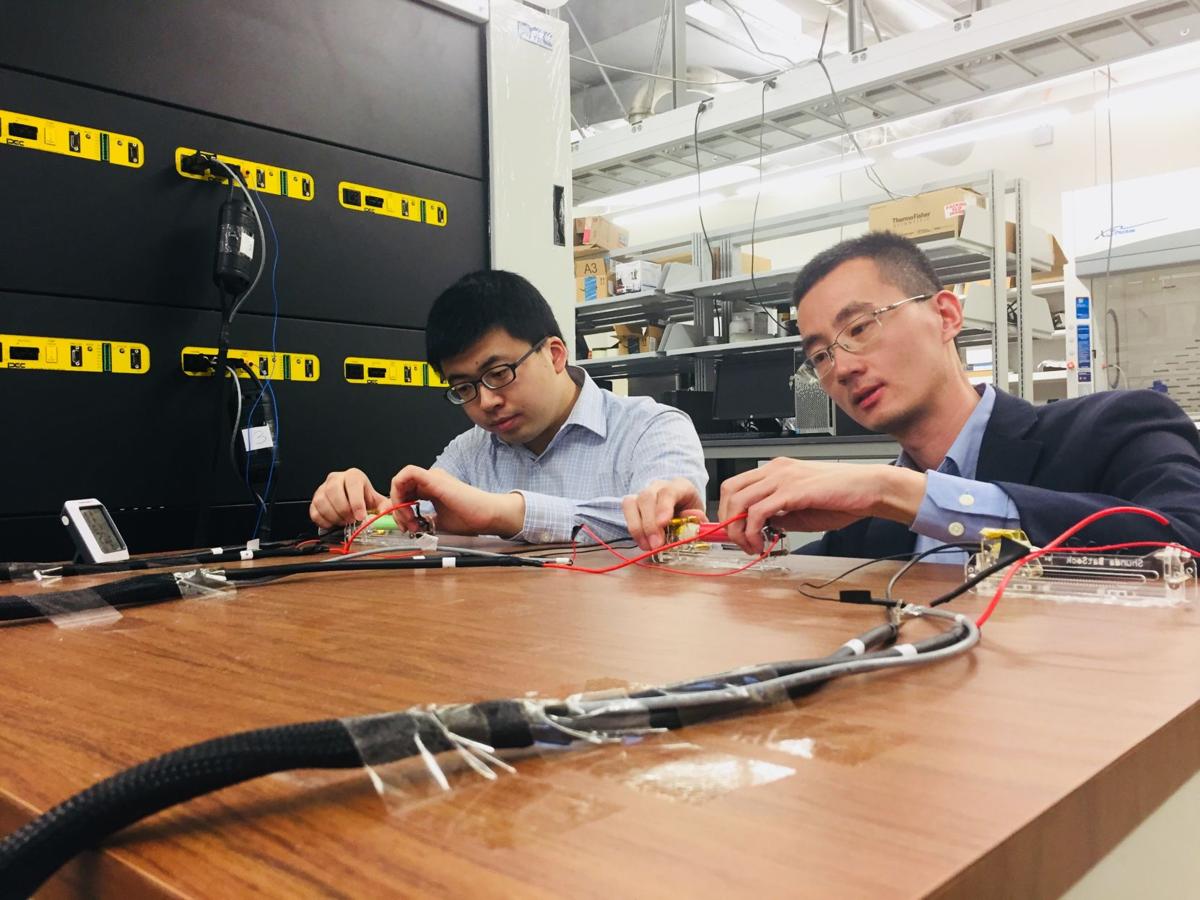 Assistant Professor Huazhen Fang, in the Mechanical Engineering Department at the University of Kansas, tests a battery with his doctoral student, Ning Tian. 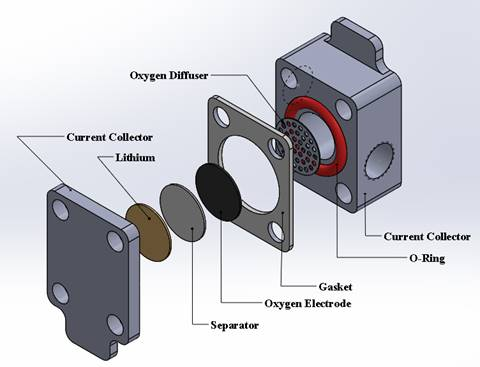 A current model of the lithium-oxygen battery project, led by Assistant Professor Xianglin Li, in the Mechanical Engineering Department at the University of Kansas.

The future of lithium battery technology may lie with the University of Kansas mechanical engineering department.

“The lithium-oxygen battery is a newer technology that theoretically has a few orders of magnitude higher of capacity,” Li said. “So, if we can successfully develop a prototype, ideally you can charge your phone once a week, rather than once a day.”

Additionally, he said anything that uses battery storage can utilize the lithium-oxygen batteries, such as cellphones, electric vehicles and renewable energy technology upon its completion.

Li said he started conducting research relevant to lithium-oxygen batteries and fuel cells when he joined the University in 2014. In October 2018, he earned an additional two-year grant of $219,312 from the National Science Foundation to continue research.

Li said the lithium-oxygen battery works by breaking down oxygen from its environment within the concentration gradient of the battery and is consumed inside the electrode, or air interface. The process of consuming the oxygen from the air is similar to the process of vacuuming; however, concentration creates the suction rather than pressure.

The challenge for Li is understanding the mass transfer and heat transfer within the battery’s oxygen electrodes. He said the inability for the electrodes to discharge energy as quickly as lithium-ion batteries is its main limitation.

“The lithium-oxygen battery can, with the same weight, drive a car for 500 miles very easily, but you can only drive very, very slow because it doesn’t charge and discharge fast enough,” Li said.

Li said the project will remain in the research phase until they get the battery’s efficiency to its full potential.

“Some of the materials can get up to 80% efficiency now. It should ideally be higher or potentially much higher, because nobody wants to get just 80% of the energy out of your battery,” Li said.

Fang’s research strengthens lithium-ion batteries against its vulnerability to overheating. That was the problem with the infamous recall of Samsung’s Galaxy Note 7, which resulted in the mobile phones bursting into flames.

The overheating issue originates from the lithium’s highly reactive metal and the commonly used electrolytes, which are flammable, Fang said.

“Hence, fires or explosions may happen when overheating arises,” Fang said. “For a lithium-ion battery pack composed of many cells, a ‘hot spot’ once forming can quickly spread from one cell to the others in a domino effect, devastating the entire pack in a few seconds.”

Fang received a five-year, $500,000 grant from the National Science Foundation as part of the Faculty Early Career Development Program and expects the project to take the duration of that time.

“For a lithium-ion battery pack composed of many cells, a ‘hot spot’ once forming can quickly spread from one cell to the others in a domino effect, devastating the entire pack in a few seconds.”

Fang said besides the material used, other factors such as overcharging, hot temperatures, physical damage, manufacturer defects and age-induced internal failure contribute to the production of thermal runaway. He said without timely heat removal, the thermal runway will cause heat and pressure to break down the electrolyte and produce flammable gasses and oxygen, which will eventually ignite the battery.

He said to do this, his team will first implement a physics-based battery model to provide understanding of how thermal heat generates and transfers across lithium-ion batteries. Based on the model, a machine using learning algorithms will combine the real-time data to estimate the thermal behavior inside a lithium-ion battery and identify thermal anomalies, or the issues that causes overheating within the battery.

The solution combines machine learning and an abundance of data to achieve thermal monitoring at a high accuracy and effectiveness.

“This will give us a unique and strong leverage to ensure the thermal safety of lithium-ion batteries,” Fang said.

As part of the five-year project, Fang said the team will continue to bring STEMM science outreach to local students in juvenile confinement through a previously established collaboration with the Douglas County Department of Youth Services.

“Studies show that students in juvenile confinement are generally underserved in STEMM education and thus often left unprepared for future education opportunities to build a positive long-term life outlook,” Fang said. “We hope our outreach activities for them can enhance their STEM access and stimulate their passion for education in relevant areas.”