Out-of-town visitors brought the city of Lawrence approximately $17.8 million during the 2019 Kansas football season, an economic impact report shows. Without a football season, the city may see a significant decline in sales tax revenue.

While Kansas football is still currently scheduled to start its season on Sept. 5, cases of the new coronavirus are continuing to increase in Douglas County and across the United States.

Without the revenue-driving sport, businesses in Lawrence could suffer. In 2019, visitors for the entire football season directly supported over 18,000 jobs locally and spent nearly $6 million in retail and nearly $4.5 million on food and beverages, according to an economic impact report compiled by eXplore Lawrence, a non-profit organization.

“[Lawrence] has a symbiotic relationship with [KU],” said Michael Davidson, executive director of eXplore Lawrence. “The college is a big generator for us.”

While the University of Kansas is historically more well known for its men’s basketball program, Davidson said it’s football that brings in the most money for the city.

Because of the nature of football, visitors are likely to spend at least a night — or an entire weekend — in Lawrence, he said. And because David Booth Kansas Memorial Stadium can hold nearly three times as many fans as Allen Fieldhouse, football games have the capacity to yield larger crowds.

“Football lends itself to more overnight stays. With a [men's] basketball game, you’re in and out,” Davidson said. “Football is the number one generator for colleges in terms of sports. No sport compares to football.” 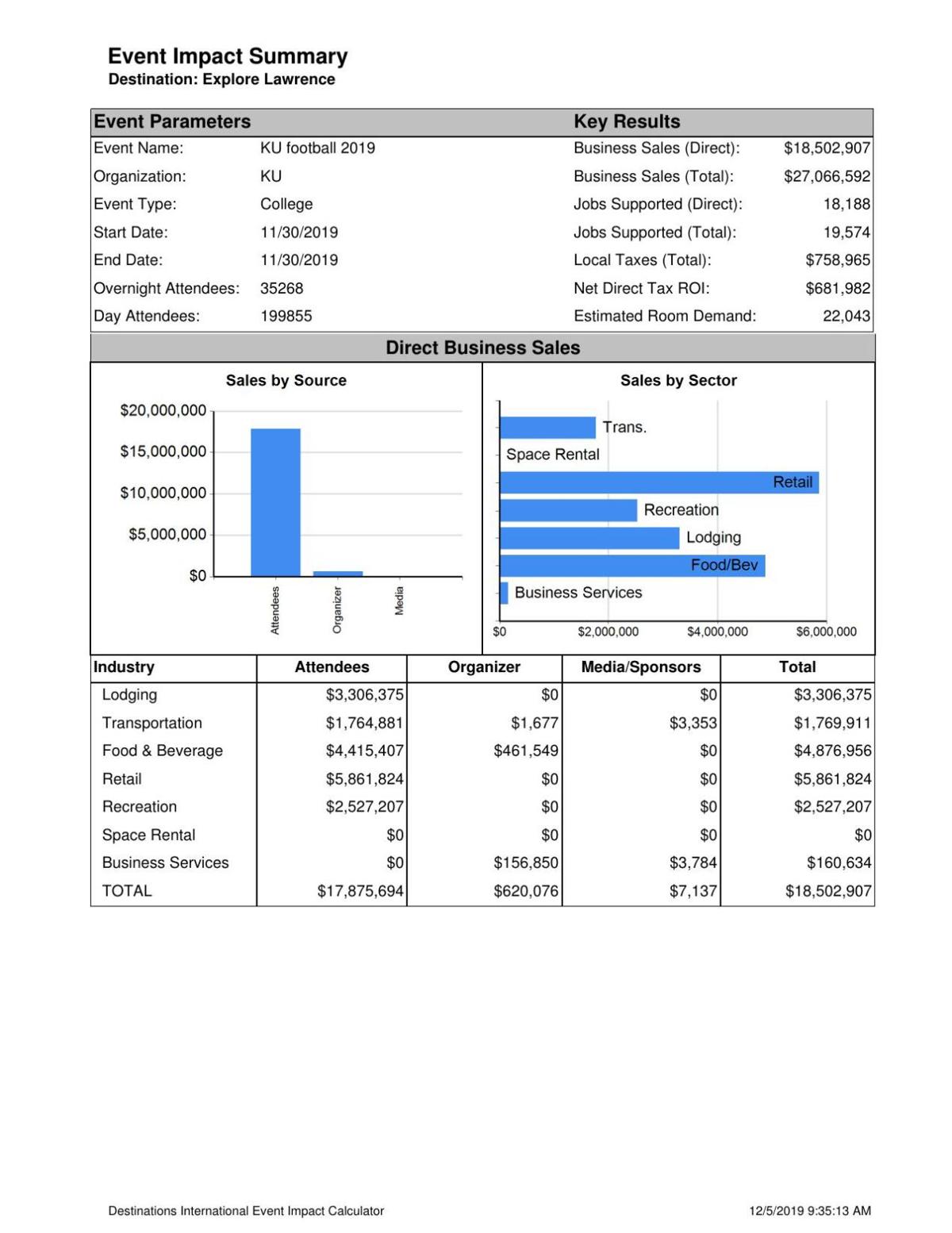 KU sports are a factor in both sales tax and transient guest tax revenues for Lawrence, city spokesperson Porter Arneill said in an email to the Kansan. The 2019 Kansas football season directly generated $435,222 in sales tax for the city, according to the economic impact report.

Kansas football also generated almost $200,000 in transient guest tax revenue during the 2019 season, according to the report. Transient guest tax is a tax on lodging rentals paid by guests renting for less than 28 consecutive days.

“The city is keeping an eye on sales tax and transient guest tax revenue continually to understand how much change is occurring and to adjust budget preparations,” Arneill said.

Businesses in downtown Lawrence are preparing themselves for a fall that is drastically different than what they’re used to.

“Even during years where [Kansas football] is struggling, we still see a lot of our customers come to town, make at least a day if not a weekend of it, and dine on Mass and shop on Mass,” said Brady Flannery, vice president of Weaver’s on Massachusetts Street. “We know that’s probably not going to take place in the fall and that will be a huge hit on not only Weavers, but all of Lawrence businesses and hospitality.”

Flannery said the department store typically plans its fall season merchandise six months in advance. But with so much uncertainty due to the pandemic, they’ve had to adjust their plan to accommodate the lack of customers they plan to see in the fall.

Restaurants in Lawrence are also bracing for the potential of not having a football season. Jefferson’s Restaurant typically sees about a 20% increase in traffic when students return to campus and football season comes into full swing, said Brandon Graham, president of Jefferson’s Franchise Systems.

“There’s a natural increase in revenue with game days and traffic from the whole weekend,” Graham said. “Not having football season would cost us in revenue sales.”

Beau Burns, director of operations for The Burger Stand, said while losing a football season would result in revenue losses for many businesses in Lawrence, it’s not his main concern for the fall.

“The downtown local economy is very much reliant not only on students, but also parents, friends and families when it comes to sports weekends, but we’re not really relying on that too much right now,” Burns said. “We have already been like, ‘Alright, we need to prepare for essentially looking at it as if we’ve opened a brand new business.’ We don’t expect to have the same customer traffic as we did last year.”

Last month, Kansas Athletic Director Jeff Long said he was optimistic for the return of football in the fall.

“I’m hopeful that we will start in September and end on Thanksgiving," Long said in a video-conference panel on Tuesday, June 16. “I think we have a chance.”

Long announced a ticket assurance plan on June 17 for donors and fans due to the uncertainty of a football season amid the coronavirus pandemic. The plan accounts for the cancelation and postponement of games, and takes into account the possibility that games may be played with lower capacity.

Since June 17, coronavirus cases in Douglas County have increased from 88 to 415 on July 10, according to the Kansas Department of Health and Environment. Lawrence Douglas County Public Health officials confirmed 103 new cases in the county in just one weekend.

The Ivy League announced Wednesday that its upcoming fall sports seasons will be canceled, with no games being played until Jan. 1 at the earliest. The Big 10 also announced Thursday it will switch to a conference-only season for all fall sports, the first Power Five conference to announce schedule changes.

Other conferences across the country, including the Big 12, have not announced any schedule changes for the upcoming season, as of Friday.