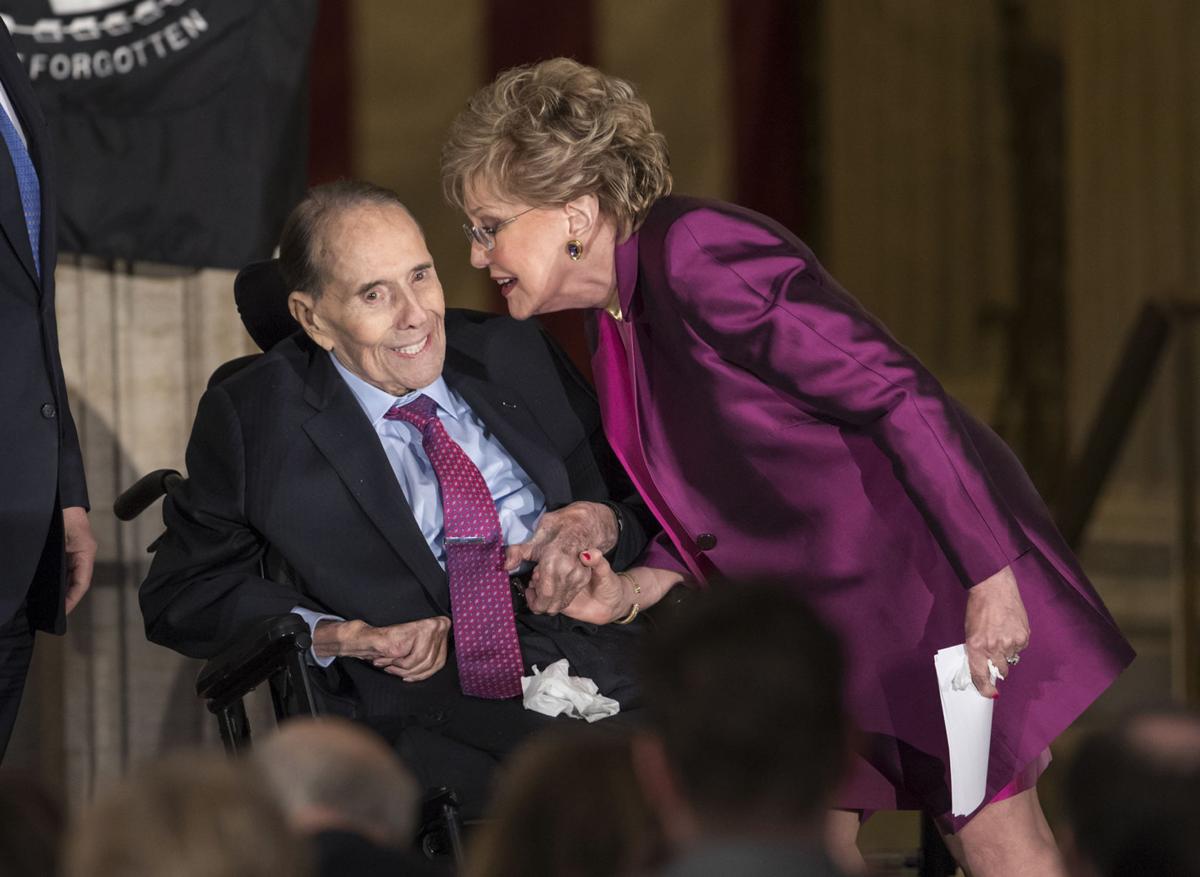 Former Senate Majority Leader Bob Dole smiles as he gets a kiss from his wife Elizabeth Dole as he is honored at the Capitol with a Congressional Gold Medal, in Washington. 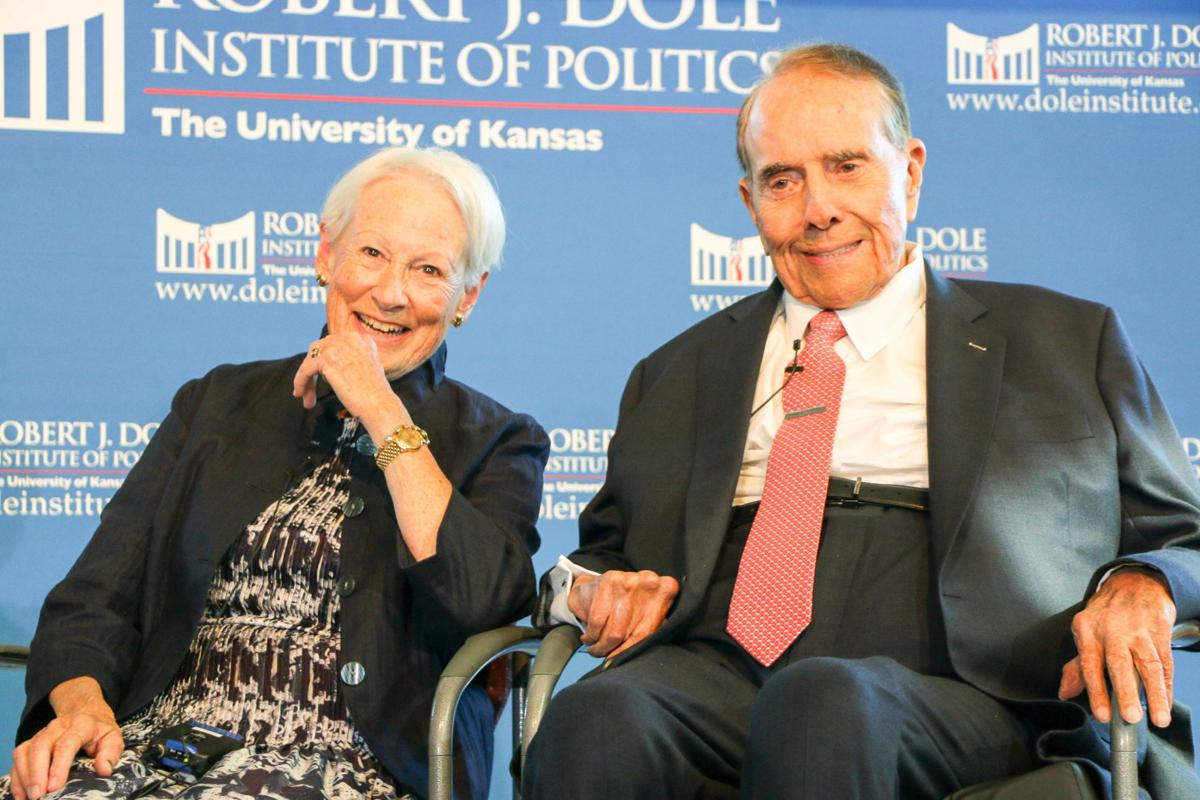 Former senators Bob Dole and Nancy Kassebaum speak at the Dole Institute of Politics on Sept. 17, 2017, in "Giants of the Senate." Both are former students of the University. 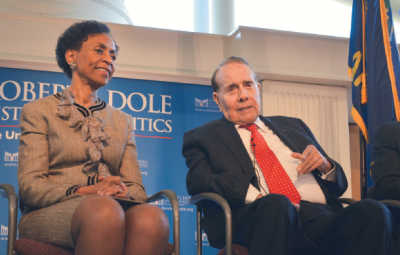 "it is with heavy hearts we announce that Senator Robert Joseph Dole died early this morning in his sleep," the statement said."At his death, at age 98, he had served the United States of America faithfully for 79 years."

Dole was born in Russell, Kansas on July 22, 1923, where he began his career in politics by running for country attorney for Russell County. He attended the University of Kansas in the fall of 1941, according to the Dole Institute's timeline, as a first generation college student.

Dole enlisted in the military in the early 1940s, and was severely injured serving on April 14, 1945. His right shoulder was permanently damaged, which sparked his drive to support disability causes across the nation.

After returning from the war, Dole began his life in politics and public service running for the Russell County attorney. In an interview with the Kansan in August, Dole spoke about how his fifth year as county attorney was when things started to change.

"My congressman, who has become a pretty good friend, came to me and said, 'Bob, I'm going to retire at the end of my term. Nobody will know it but you or me, and I think you should run for my job,'" Dole said. "And I, of course, was a little startled. Going from county attorney to Congress seemed like a big jump to me. But he said he would help me quietly and announce later on that he was leaving and that he had asked me to succeed him. So, I went on to Congress."

Dole served in Congress for eight years before winning a seat in Senate in 1968, taking 60 percent of the vote. From there he went on to be appointed the chairman of the Republican National Committee in 1971.

According to the Dole Institute archives, Dole viewed this position as a "stepping stone to leadership roles in the senate." He held the role for two years.

He was re-elected to the Senate in 1974, defeating Bill Roy from Topeka. This election was notably the one that impacted Dole's fashion, as he brought in outside help to manage his campaign. Through this term, Dole focused on bipartisanship programs, including child nutrition and Food Stamps programs.

Dole married Elizabeth (Hanford) Dole on Dec. 6, 1975. At the time, Elizabeth was a member of the Federal Trade Commission and former deputy to President Nixon's Special Assistant for Consumer Affairs.

In 1976, President Gerald Ford chose Dole as his running mate for the presidential election. However, they lost a close race of 2 percent of the popular vote against Jimmy Carter and Walter Mondale. Although he lost, Dole had now been in the public's eye and gained much more national attention.

Dole announce his first run for office in 1979, but withdrew his name from the ticket quickly. He won a third term in the Senate in 1980, introducing the Bayh-Dole Act which brought incentives forward for presenting new technology to the marketplace.

President Ronald Reagan signed the bipartisan Social Security Act, in which Dole played a large role in saving the Social Security program. Because of his flexibility and compromising across party lines, Dole helped move the legislative stalemate around to lessen the threat against Social Security.

In 1984, Dole was elected the Senate Majority Leader, putting him in charge of representing the Republican Party. Following a successful run as the Majority Leader, Dole won re-election to the senate for his fourth time.

Dole announced that he was going to run as the Republican candidate for the Presidential race of 1988 in Nov. of 1987, but withdrew from the race in March of that same year.

Americans with Disabilities Act went into effect July 26, 1990. When asked what accomplishment made him the most proud, Dole told the Kansan that it would be his first speech in the Senate on disability issues on April 14, 1969 - the anniversary of his injury - and the contribution he made to disability programs.

Dole was re-elected to the senate in 1992, becoming the dominant figure of the Republican Party. In 1994, Dole became the Senate Majority Leader again just before announcing his bid for Presidency on April 10, 1995.

He entered the primaries as the clear frontrunner for the Republican Party, which prompted his resignation from the Senate in 1996 in order to focus on the campaign. Despite his efforts, Dole's campaign fell short and the 1996 election was won by Bill Clinton.

A few months later in Jan. 1997, President Clinton aware Dole with the Presidential Medal of Freedom. Later that year, Dole led the National World War II Memorial campaign fund and later was named the chairman of the International Commission on Mission Persons.

Clinton and Dole continued working together as the years went on, as they partnered on the Families of Freedom Scholarship following the 9/11 terrorist attacks. The pair were able to raise over $100 million for scholarships for the children of the victims.

On Nov. 14, 2001, Dole was presented with the French Legion of Honor Award, an award dating back to 1802 intended to praise individuals for achievements in military and civil service.

The Robert J. Dole Institute of Politics was formally dedicated to the former senator on July 20-22, 2003. The ceremony was held on Dole's 80th birthday and attended by many familiar faces, including his wife Sen. Elizabeth Dole, former president Jimmy Carter, former Sen. George McGovern, former Rep. Jack Kemp, Sen. John McCain, among others.

Dole was named co-chair of the Commission on Care for America's Returning Wounded Warriors on July 24, 2007. He continued to serve veterans through the Honor Flight Network, a service that provides veterans free trips to visit the National World War II Memorial.

Dole was awarded the Congressional Gold Medal on Jan. 17, 2018 in a ceremony at the U.S. Capitol. The legislation said that in his long life of public service, "Bob Dole has embodied the American spirit of leadership and determination, and serves as one of the most prolific role models both in and outside of politics."