During a news conference on Wednesday, three members of Rock Chalk Invisible Hawk expressed their frustration with the response from KU administration and Student Senate to the 15 demands the group presented last Wednesday.

Katherine Rainey, a senior from Shawnee; Kynnedi Grant, a junior from St. Louis; and Caleb Stephens, a 2014 University graduate; hosted the news conference.

On Nov. 11, the group presented the demands at a town hall forum on race, respect and responsibility moderated by Chancellor Bernadette Gray-Little.

On Nov. 13, Gray-Little sent a statement in an email to all students, saying the administration had heard the concerns of students, faculty and staff.

Grant called Gray-Little’s statement a “non-response” to the demands of the group.

In a campus-wide email on Tuesday, Provost Jeffrey Vitter said the administration is creating a  “small advisory team of faculty, students, staff, and administrators.” According to the statement, the advisory team will “deliver an action plan by mid-January that addresses challenges put forward by Rock Chalk Invisible Hawk, as well as concerns from others at the forum.”

Rainey, Grant and Stephens said there has been no action from administration yet regarding Rock Chalk Invisible Hawk’s demands.

The group clarified and explained their demands in a news release on Wednesday.

“On this campus, there have already been significant efforts to address and eradicate the danger we face. All of these efforts have been led by those who are oppressed. We are impatient. Rock Chalk Invisible Hawk, as a group, is tired of cries for justice being silenced and dismissed. We are here. We are aware. We are powerful and you cannot keep pushing us away.” 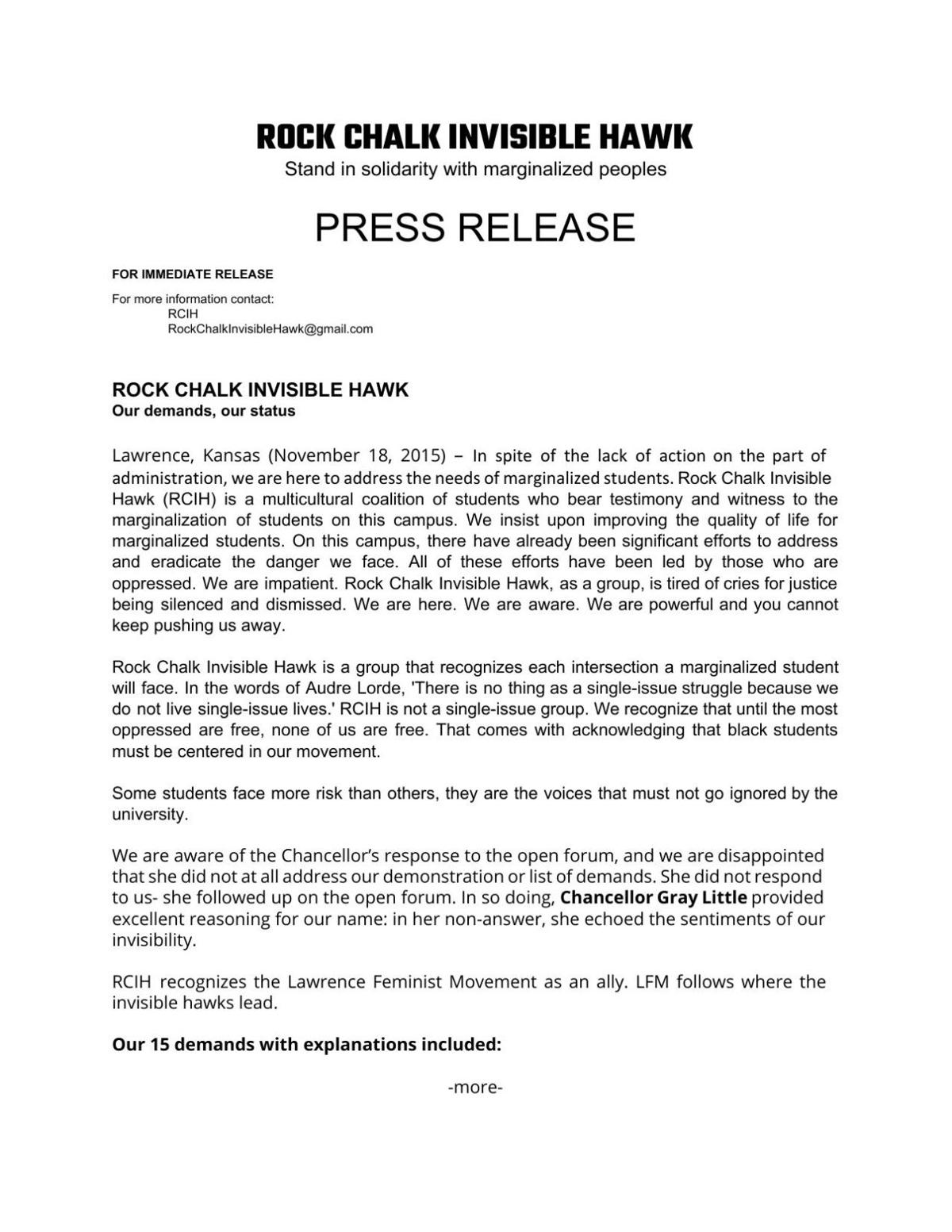 Despite the “non-response” from administration, Rainey said University departments and faculty have shown tremendous support for the group.

“There’s been a lot of support from different departments asking how they can help individually,” Rainey said.

In the list of demands, Rock Chalk Invisible Hawk set a deadline of Jan. 19 for administrative action. Stephens said they are confident that the University would follow through in meeting the needs of their students. In the meantime, Rainey said, the group will continue meeting with individual departments about making campus more inclusive.

Rainey, Grant and Stephens said they wanted to make clear that Rock Chalk Invisible Hawk are not themselves calling for the resignations and did not suggest to the Student Executive Committee that the three resign.

On Monday, Student Senate released an 11-item action plan to address inclusivity on campus, but Grant said she felt the 11 proposals were not concrete action toward change.

“I think the 11 points were just regurgitated information,” Grant said. “It’s incredibly frustrating to read — a lot of the proposals didn’t make sense. It was a lot of self-reflection, not action.”

Doug Bonney, chief legal counsel with the ACLU in Kansas, told the Wichita Eagle that the calls for Pringle, George and Moon to resign brought up concerns about free speech.

“Free speech is very much structured. It’s not kind to people of color,” Stephens said. “There is a special weight that free speech carries because it carries a speech that oppresses and continues to oppress black people,” Stephens said.

Groups of students at other universities have acted similarly to Rock Chalk Invisible Hawk. Last week, Wichita State University students presented five demands to their administration regarding race and inclusivity.

Stephens said that, although there have been no formal communications, there are similar sentiments at other institutions.

“We’re tired, we’re tired enough,” Stephens said. “Every single second that we breathe, that we feel insecure, or uncomfortable, or unsafe, that’s another moment we’ll never get back.”

After the town hall meeting on Nov. 11, racism and discrimination at the University has become the dominant conversation. Throughout the year, several events have contributed to the current campus climate.

Rainey said the actions of Rock Chalk Invisible Hawk come after several attempts at communicating their concerns to administration and Student Senate.

“We are tired of asking and being politically correct,” Rainey said. “Going into this year, we let administration and senate know that this is a pivotal time, not just at KU, but across the nation. Marginalized students are not okay and are not complacent in their oppression. It’s time to acknowledge that and put in plans of action."

Rock Chalk Invisible Hawk will continue advocating their demands to the University, but Rainey said change is not always going to be visible.