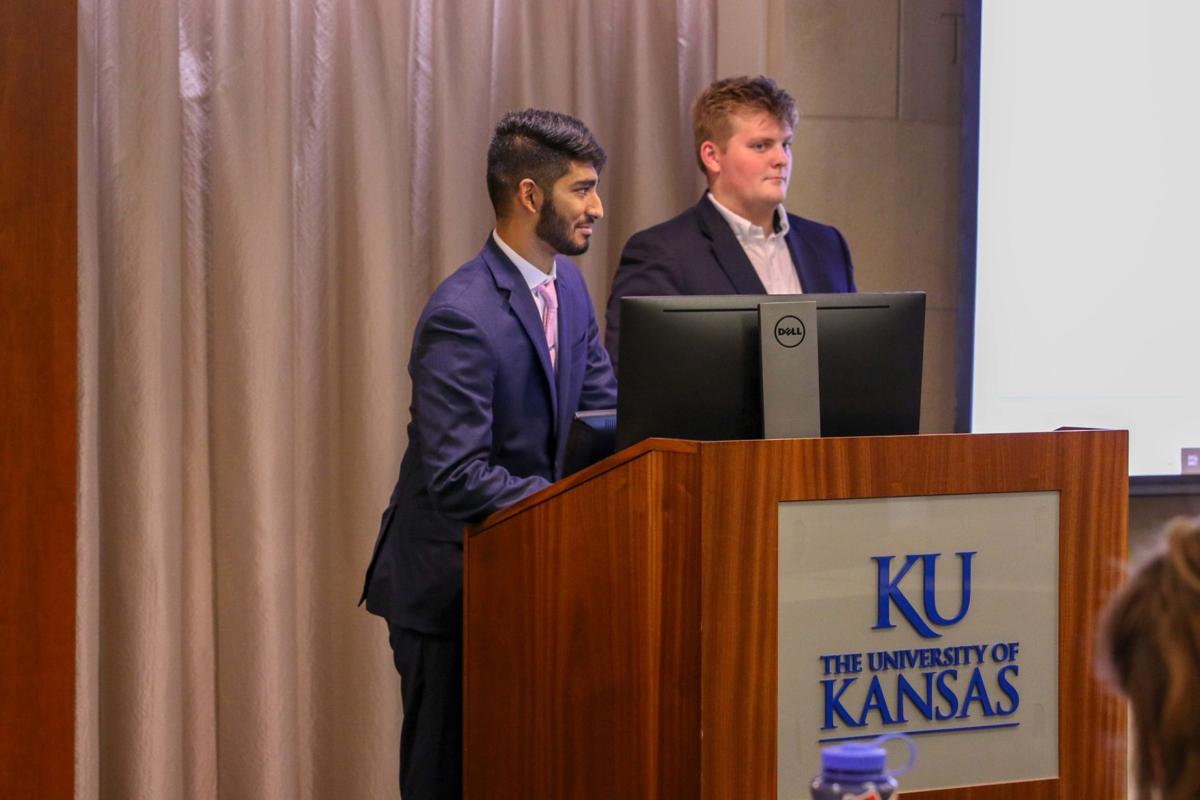 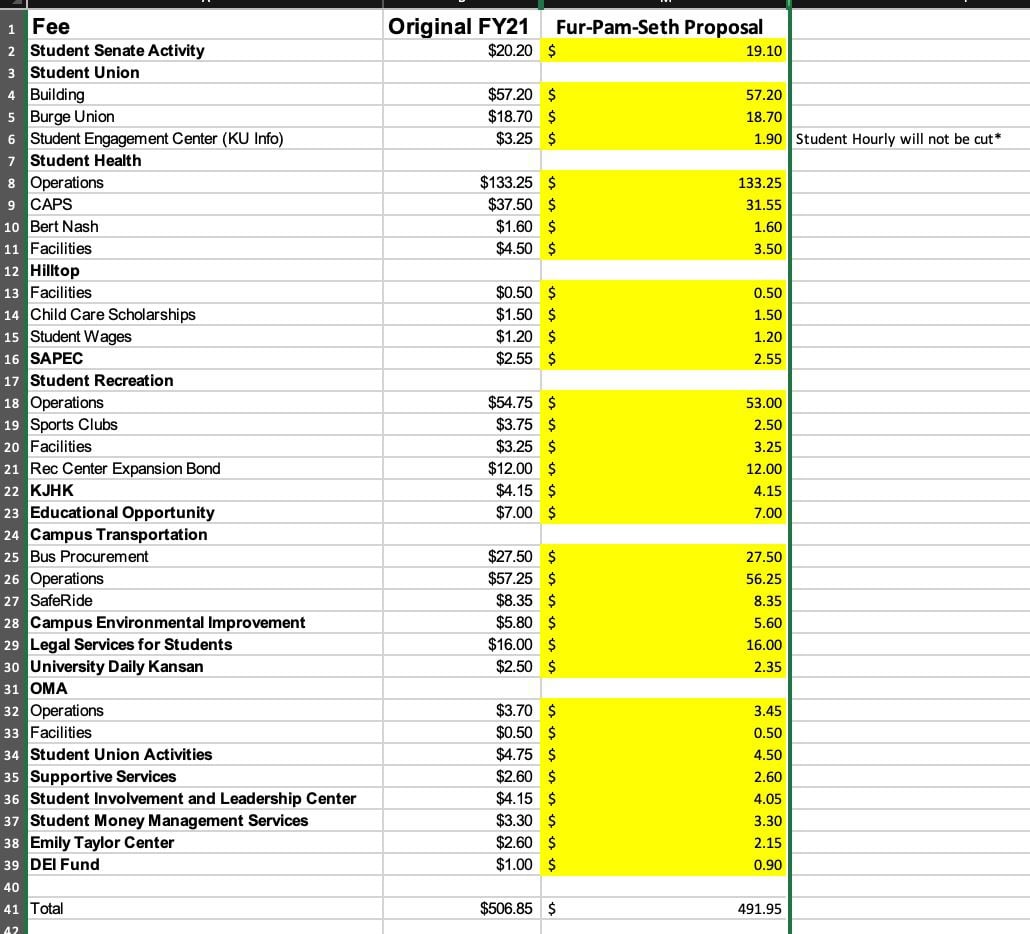 A screenshot of a spreadsheet shows the differences in fees from the proposed fee review package in February and the package determined Tuesday night.

Within five hours, the University of Kansas student government rolled out an entirely new fee package Tuesday night, after the chancellor requested the entire institution flatten both its tuition and fees to alleviate the economic burden students would face as a result of the coronavirus.

University administrators requested Student Senate flatten a student fee package for the 2020-2021 school year under a cap of $491.95. Roughly half of the initial fee increase determined in February was allocated toward the Counseling and Psychological Services on campus, which senators say could prove to be especially vital for students during an unprecedented global pandemic.

While other institutions in the state, like Kansas State University, are likely to strive for a small increase later in the May, the University is striving for a $0 increase in tuition and fees partially because “we’re the flagship,” said Tammara Durham, the vice provost for Student Affairs.

“We have to do what we know is right,” Durham told senators during the virtual meeting Tuesday. “And the chancellor firmly believes that in order for us to demonstrate that we understand and we know how difficult this pandemic is for our families and for our students, a zero increase better represents the fact that we’re hearing you and we’re gonna do our part as best we can.”

Student Senate voted to increase student fees by $15, bringing the total to $506.95 per student per semester.

After hours of deliberations, senators ultimately voted to increase the CAPS fee by only $1.55 in order to help cut the fee cost to fiscal year 2020’s $491.95. Fee increases were also cut from the Student Senate Activity fee, the Student Union’s Student Engagement Center fee, the Student Health’s facilities fee and others.

“No one wanted these cuts to happen,” said Student Body Vice President Seth Wingerter, who led the meeting. “But, at the end of the day, we saw what was going to need to happen given the circumstances we were dealt, and we came together and found the scenario that we were comfortable with.”

‘This has to be passed’

Some senators wanted to rework the bill over the course of the next few days rather than finalizing within five hours. Student Body President Tiara Floyd quickly turned that down during the meeting Tuesday night as it approached midnight.

“This has to be passed soon,” Floyd said. “Let’s be honest, I don’t have time … to sit down and discuss this constantly before Friday.”

“It can be on the next administration to increase these fees exponentially,” she continued.

Most student services said they had cash set aside to help carry them if they didn’t get an increase.

In the case of CAPS, the plan was to use the fee increase to fund more positions. It was initially going to be divided into four parts: $1.53 to hire a case manager, $1.80 to hire a clinical social worker, $1.93 to hire a psychiatrist and $2.24 to reduce the cost of non-psychiatric appointments from $15 to $10.

“The fee increase was going to decrease wait times, offer up better services through CAPS and allow students to really get more for their money,” said Grant Daily, a senator from the College of Liberal Arts and Sciences and the student body vice president-elect. “It was going to make it cheaper for students to utilize the program and it just had a lot of good benefits.”

A $1.55 increase to the CAPS fee remained in the final version of the student fee package. This money will be used to hire a case manager, Daily said.

Last year, the student fee increased $10 for fiscal year 2019-20. This increase included the introduction of a $2.60 fee for the Sexual Assault Prevention and Education Center and $3.25 for the Student Engagement Center.

Kansas State University's student government will hold a special meeting after the end of the semester to reevaluate the financial situation of entities that receive funding from student fees. It's possible fees could be cut due to an expected decrease in enrollment and uncertainty from the pandemic, according to the Collegian, Kansas State's student newspaper.

The University’s student government was given until Friday to submit the fee package to the Board of Regents.

Chancellor Douglas Girod will review the package — and has the power to veto it — before submitting it to the Kansas Board of Regents.

The Kansan contacted University spokesperson Erinn Barcomb-Peterson to understand more of Girod’s position behind keeping tuition and student fees flat for the coming fiscal year. Barcomb-Peterson did not immediately reply.

Other institutions appear to have a longer timeline. Kansas State’s student government is not meeting until late May to discuss student fees, according to the Collegian.

The next KBOR meeting is scheduled for May 20-21, where it is likely they will review the University’s tuition proposal.

The University of Kansas dropped to negative outlook in the most recent S&P Global Ratings report due to the projected economic impact of the new coronavirus.

University of Kansas Student Body Vice President Seth Wingerter looks back on his time Student Senate as the graduating senior will move on to Andersons Trade Group in Auburn, New York.