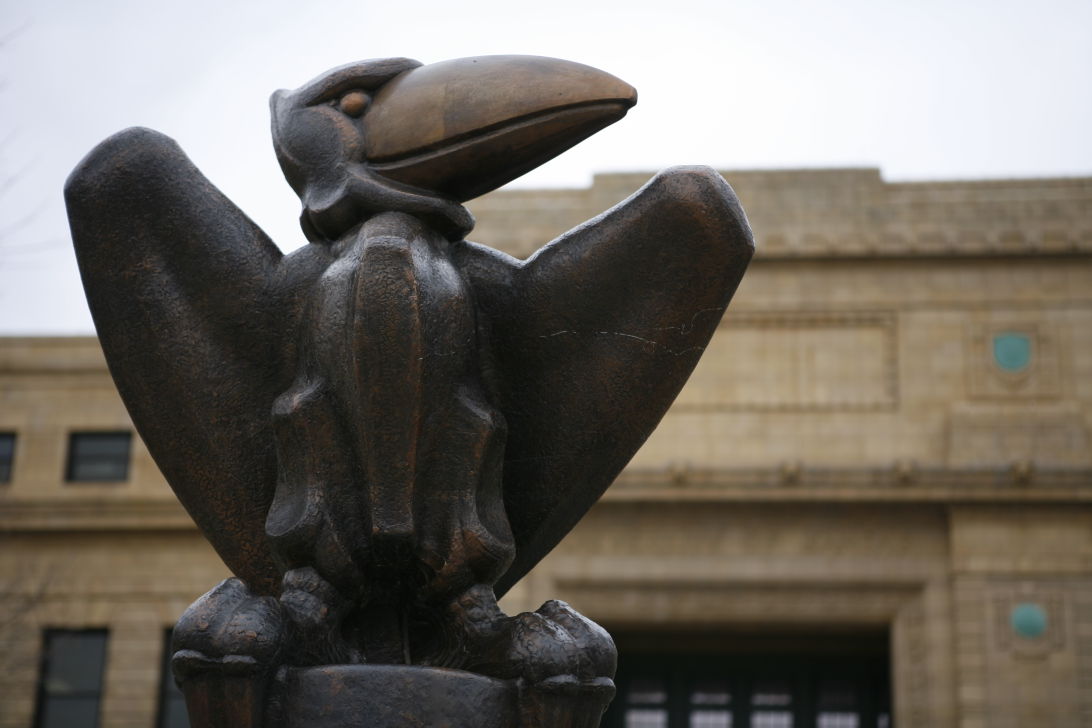 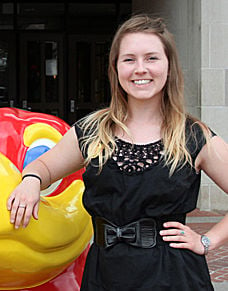 The Student Senate executive staff – Morgan Said, a senior from Kansas City, Mo., Miranda Wagner, a senior from Shawnee, and their hired officers – has been removed from office.

Emma Halling, a senior from Elkhart, Ind. and former student body vice president, is acting as interim student body president until new leadership is determined with a re-election.

In a decision released Friday, the University Judicial Board Appeals Panel overrode the results of the current Student Senate election and required a re-election of Student Senate positions, including President Said and Vice President Wagner, in the coming weeks.

The Panel met Wednesday to hear an appeal that argued that the results were distorted because all votes for Jayhawkers, whose members were disqualified in April, were not counted. The Panel agreed in its decision and determined the Elections Commission should hold a re-election.

“We conclude that the only reasonable reading of the Election Code is that, first, the election results were ‘materially altered by a violation of the Code,’ and, second, a new election is required,” the Panel said in its decision, signed by chair Thomas Stacy and Panel members Michelle Ginavan Hayes and Lisa Wolf-Wendel.

The decision says the Commission has flexibility in determining the rules of the new election:

“We stress that although the Code plainly requires a new election in cases such as this, it does not specify rules for the conduct of such an election. This means that the Commission necessarily has a large range of discretion in adapting and interpreting the Code for this purpose. It also means that many challenges to the Commission’s conduct of the new election must surmount of the very high bar of showing that Commission has abused its discretion.”

The Panel also mentions on page four and five of the decision that “the only reasonable means of eliminating . . . irrelevant guesswork, given that approximately 60% of the voters cast votes for the Jayhawkers candidates, is to ask those voters which eligible candidate they prefer. And the only feasible mechanism for doing this is to hold a new election.”

The appeal heard on Aug. 21 was brought to the Panel by Eli Hymson, a sophomore from Parkland, Fla. It was denied by the Student Senate Court of Appeals on May 2, the 2,662 votes for Jayhawkers were nullified, and Student Senate executive staffmembers took office in May.

The disqualification of Jayhawkers stems from a violation brought to the Commission by Grow KU about an incomplete financial report after a member of the coalition allegedly purchased Chipotle for other members on March 30.

On April 8, the Elections Commission disqualified the entire Jayhawkers coalition. Because this happened the night before the election, Jake Rapp, a graduate student from Lawrence and then-chair of the Commission, said he kept the Jayhawkers on the ballot because they had the right to appeal within 48 hours of the decision, which they filed April 9.

The Student Senate Court of Appeals announced April 10 it would not hear the appeal as there was a potential conflict of interest. It deferred the appeal to the University Judicial Board Appeals Panel, which upheld the decisionto disqualify Jayhawkers on April 24.

Pacey said he thinks the election will only be between candidates that participated in last year’s election and were not disqualified — meaning only members of Crimson and True and Grow KU — as the decision to disqualify members of Jayhawkers was upheld by the Panel in April. He said at this time, no new coalitions can be formed.

Oatman said she does not believe this is the correct understanding of the Appeals Panel’s decision and would like to see an entirely new election.

“What needs to happen is a new election needs to be held where new candidates can come, new coalitions can form and it doesn’t have to be just the people who were on the ballot. That’s how I read ‘new election,’” Oatman said.

Halling said she plans to meet with Tyler Childress, a law student from Coffeyville and last year’s chief of staff, and Reuben Perez, director of Student Involvement Leadership Center, to clarify the exact course of action based on Student Senate Rules and Regulations.

She said Marcus Tetwiler, a graduate from Paola and last year’s student body president, left in May and for that reason she has stepped into his role. For the same reason, Childress will resume his position as chief of staff.

Said said she is confident in Halling’s ability to lead the student body until a new president is elected.

“I will say that we are complying with what’s been mandated and will continue to have the student body’s interests in mind,” Said said.

“We conclude that the only reasonable reading of the Election Code is that, first, the election results were ‘materially altered by a violation of the Code’ and, second, a new election is required,” the decision by the Panel said.

There will be an election within senate to determine an interim student body vice president. All of the 2014-2015 executive staff has been removed from office.

Student Senate Rules and Regulations: A handbook that is the governing text of the Senate.

Coalition: A group of students, under one name, that create platforms and run for election on those platforms. Each coalition has a presidential and vice presidential candidate as well as other senators that are “slated” with the coalition for specific positions.

Grow KU: One of the three coalitions that ran in last year’s election. Grow’s presidential and vice presidential candidates, Morgan Said and Miranda Wagner won the election after the disqualification of the Jayhawkers coalition.

Jayhawkers: Another one of the three coalitions in the spring election. After one member of the coalition allegedly purchased Chipotle for the coalition before a meeting, and left it off the campaign expense report, Grow KU filed a complaint with the Election Commission. The Jayhawkers coalition was disqualified the night before the election. MacKenzie Oatman was the presidential candidate and Mitchell Cota was the vice presidential candidate. Cota now serves as Said and Wagner’s Chief of Staff.

Student Senate Court of Appeals: Where all decisions that were decided by the Elections Commission were appealed. This court didn’t hear many cases due to several justices having to recuse themselves for conflicts of interest.

Burritogate: The nickname the student body gave to the spring election and the subsequent appeals process. This stems from the original violation the Jayhawkers committed but often refers to the entire ordeal from start to finish.

UJB: University Judicial Board. This is outside of Senate. Once the Elections Commission made decisions and the Court of Appeals did not have quorum to make decisions, the Jayhawkers appeal went to this court — the final court in the University system. This court ruled the Jayhawkers disqualified, according to Rules and Regulations.

Material distortion: The idea the election or votes had been altered in some way. The argument presented to the UJB on Wednesday was that the votes cast for Jayhawkers didn’t count, and those students had their right to vote silenced, according to the Jayhawkers coalition.

Appeals Panel: The specific branch of the University Judicial Board that has been hearing the appeals. The panel is led by chair and law professor Thomas Stacy.

Unofficial election results: The results before they are certified by the Elections Commission.

Official election results: The results after they are certified by the Elections Commission. Both the unofficial and official results named Grow KU the winner and did not show the Jayhawkers votes.

Full results: The results including the Jayhawkers. These were released after the other results were certified. These results detailed the percentage of votes for each coalition. Jayhawkers had 61.4 percent of the vote, a plurality.

Editor's note: This story is developing. Check this article on Kansan.com for updates.

The full text of the University Judicial Board's decision on Aug. 22, 2014.

What were the stories, the moments and the memories that shaped your college experience? The Four Year Review special issue aims to showcase t…

[UPDATE: April 24, 9:20 p.m.: Jake Rapp, chair of the Elections Commission, said in an email the individual candidates and voters have 24 hour…

After more than two weeks of Student Senate elections discussions - including violations, disqualification, injunctions and hearings - the Uni…

Elections results withheld until after Judicial Board reaches decision

[UPDATE 5:16 p.m.: Jake Rapp, the chair of the Elections Commission, said in an email that the University Judicial Board hearing on Wednesday …

For the next year, the student government will be controlled by a group of candidates who, almost universally, received only a minority of the…

In the unofficial election results disclosed by the Elections Commission, Grow KU won the presidential and vice presidential positions, as wel…

Today at 3 p.m. the University Judicial Board will hear the appeal of the Jayhawkers coalition regarding its disqualification from the Student…