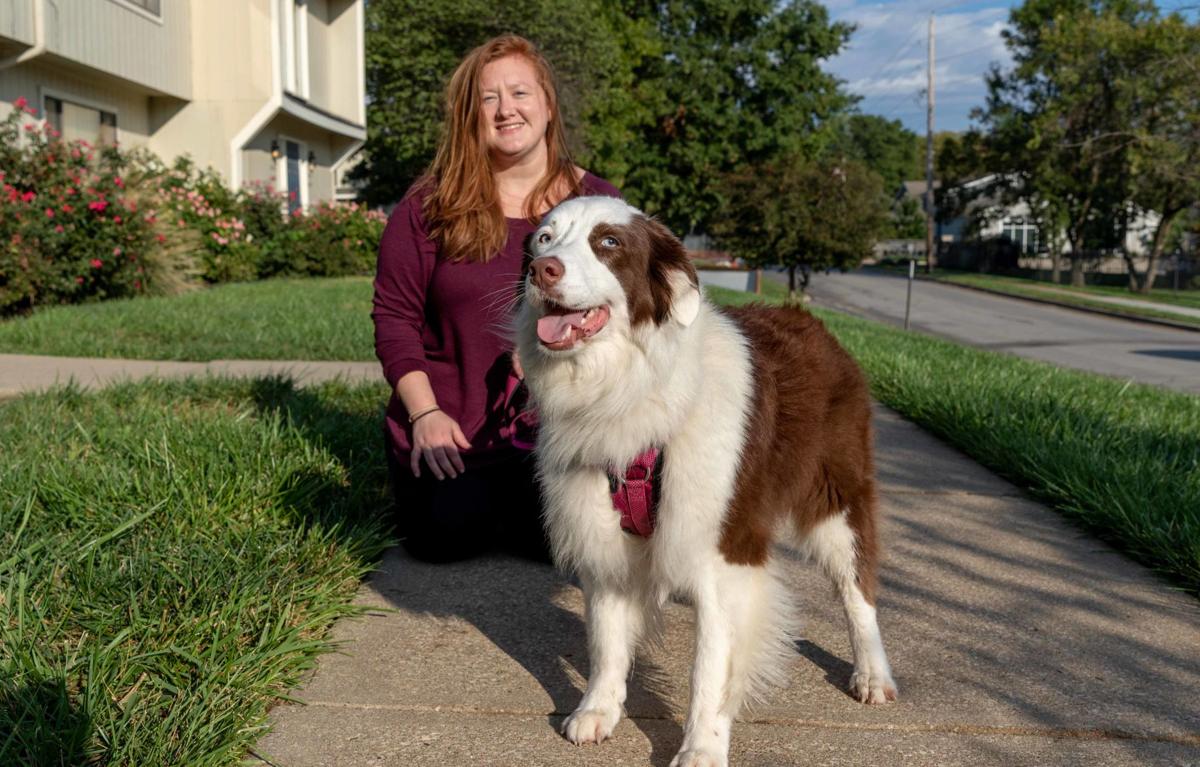 Graduate student Brittney Oleniacz hangs out with Myra, her dog who has helped her better manage her mental health. 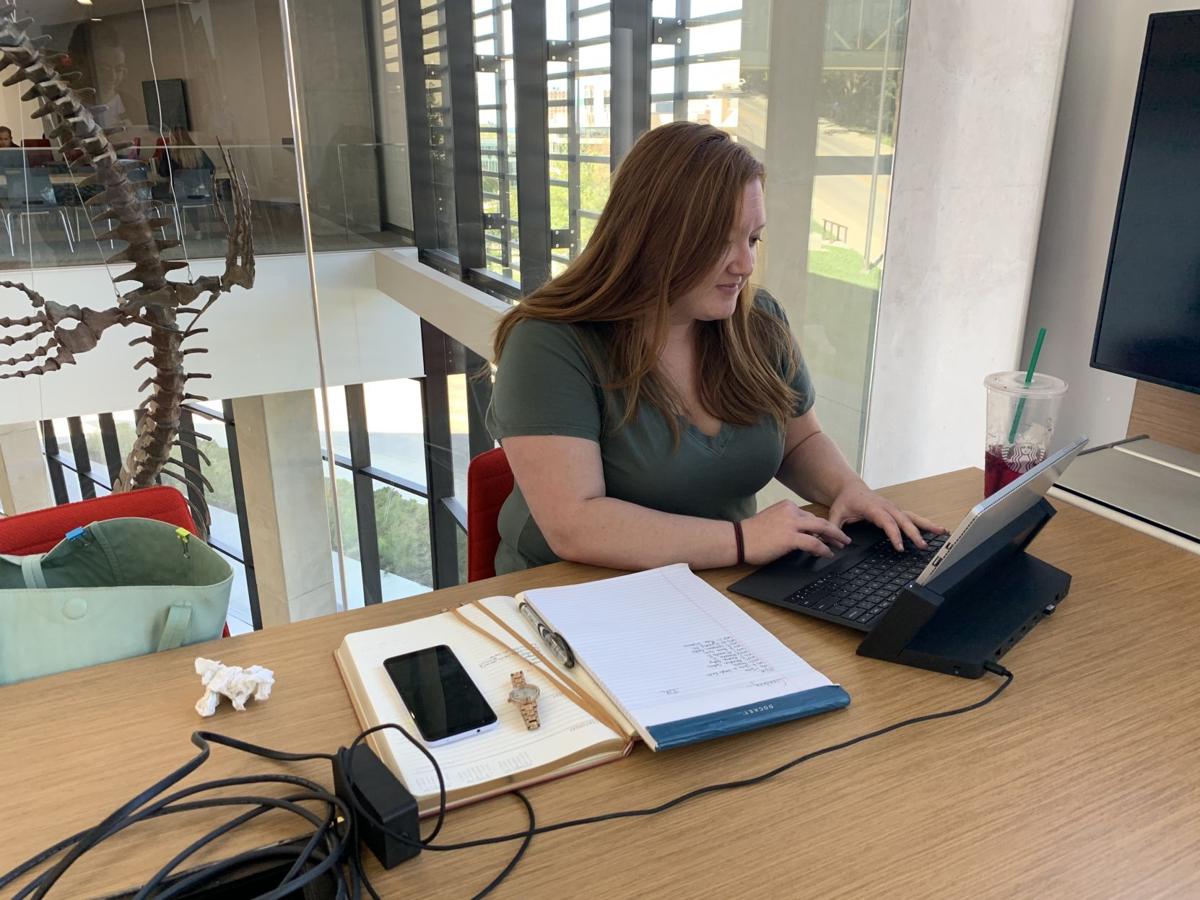 Ph.D. candidate Brittney Oleniacz works on homework in Slawson Hall. Oleniacz, like many graduate students, has struggled with her mental health throughout her time in graduate school.

Graduate student Brittney Oleniacz hangs out with Myra, her dog who has helped her better manage her mental health.

Ph.D. candidate Brittney Oleniacz works on homework in Slawson Hall. Oleniacz, like many graduate students, has struggled with her mental health throughout her time in graduate school.

Graduate student Brittney Oleniacz reads one journal article every day. She writes for two hours a day — she’s been working on the same proposal for two months — spends hours doing research in her lab, and teaches and grades undergraduate classes.

Like many other graduate students, Oleniacz said she struggles with her mental health. She said during her first year in graduate school, she considered leaving following several traumas on top of the normal stresses of life.

“When it comes to mental health, a lot of graduate students that I’ve talked to, we always ask: Why does it have to be so hard?” said Oleniacz, a student in the geology department. “I don’t know.”

She said if it hadn’t been for her dog, Myra, she probably would have left the University. She said Myra has forced her to take breaks in her usually busy day — for example, she walks three miles every morning, which allows her to practice mindfulness.

Nearly 40% of graduate students experience moderate to severe depression and anxiety, according to a study from the Nature International Journal of Science.

More than half reported feeling they had an unhealthy work-life balance, according to the survey. Inside Higher Ed described mental health issues among graduate students as a crisis.

Other graduate students at the University have struggled with staying enrolled. They’ve contemplated not pursuing their graduate degrees, as the stress from researching, teaching and grading overflows on them.

‘If I leave, I leave with nothing.’

The feeling of being stuck in her field of study caused her to struggle with her own mental health, she said. After investing so much money in graduate school, Stock felt if she quit the program, she would “leave with nothing.”

“Even if I didn’t think it was a solid fit, it’s like, we’re here now,” Stock said. “We’ve got to stick it out for better or for worse.”

Back To School Charts
Infogram

Underrepresented graduate students feel the struggles of mental illness at an even higher level, Oleniacz said. From the beginning of her time in graduate school, she said she struggled with imposter syndrome as she is a first-generation student coming from a low-income area in New Jersey. She said this, too, takes a toll on her mental health.

“People from my high school just don’t do this,” Oleniacz said. “And I’m reminded of that almost daily because my writing skills aren’t the best. I don’t speak with finesse and eloquence.”

Where to get help

University alumnus Robbie Hable knew something was wrong — he began to see several warning signs during his last two years of graduate school.

Throughout his last few semesters as a Ph.D. candidate in the chemical and petroleum engineering department, he scheduled weekly meetings with a therapist at the Counseling and Psychological Services office on campus. He said he “absolutely loved” his weekly sessions with CAPS, which he said were subsidized by the University.

But for others, CAPS has not been as accessible of a service. Even at a subsidized cost of $15 for an individual or group session, the price to seek help is too high for graduate students who may also be struggling with affording basic needs such as food, said Neill Kennedy, president of the Graduate Teaching Assistant Coalition (GTAC).

A 114% increase to health insurance for some graduate students has made it tougher to access mental health services, Kennedy said.

Some have been turned away from CAPS, Kennedy said, due to their situations being too severe. Oleniacz said this was the case for her, and she instead sought services elsewhere.

“I don’t think that CAPS feels they are prepared to kind of start untangling that mess in a grad student’s head, which is unfortunate,” Oleniacz said.

CAPS assesses the needs of students during their first appointment and recommends services either at CAPS or elsewhere after that, said Michael Maestas, CAPS director. CAPS was able to provide services to almost 98% of students during fiscal year 2019, he said. CAPS also works closely with the Bert Nash Community Mental Health Center in Lawrence.

“If a students' needs require comprehensive mental health care, or other services not available at CAPS … we connect the student with those services,” Maestas said in an email to the Kansan.

Hable received his Ph.D. in December 2018. Since then, he said he’s seen how the critical thinking skills he learned through graduate school paid off in his career. Hable now works for BASF, one of the world’s largest chemical companies.

For Oleniacz, her passion for her research is why she stayed and continued striving for her Ph.D.

“What drives us is our love of discovery, our love of our research and that we’re able to contribute something to our field,” Oleniacz said.

Though she still struggles with imposter syndrome every day, the possibility of making a contribution through research and to those around is what drives her.