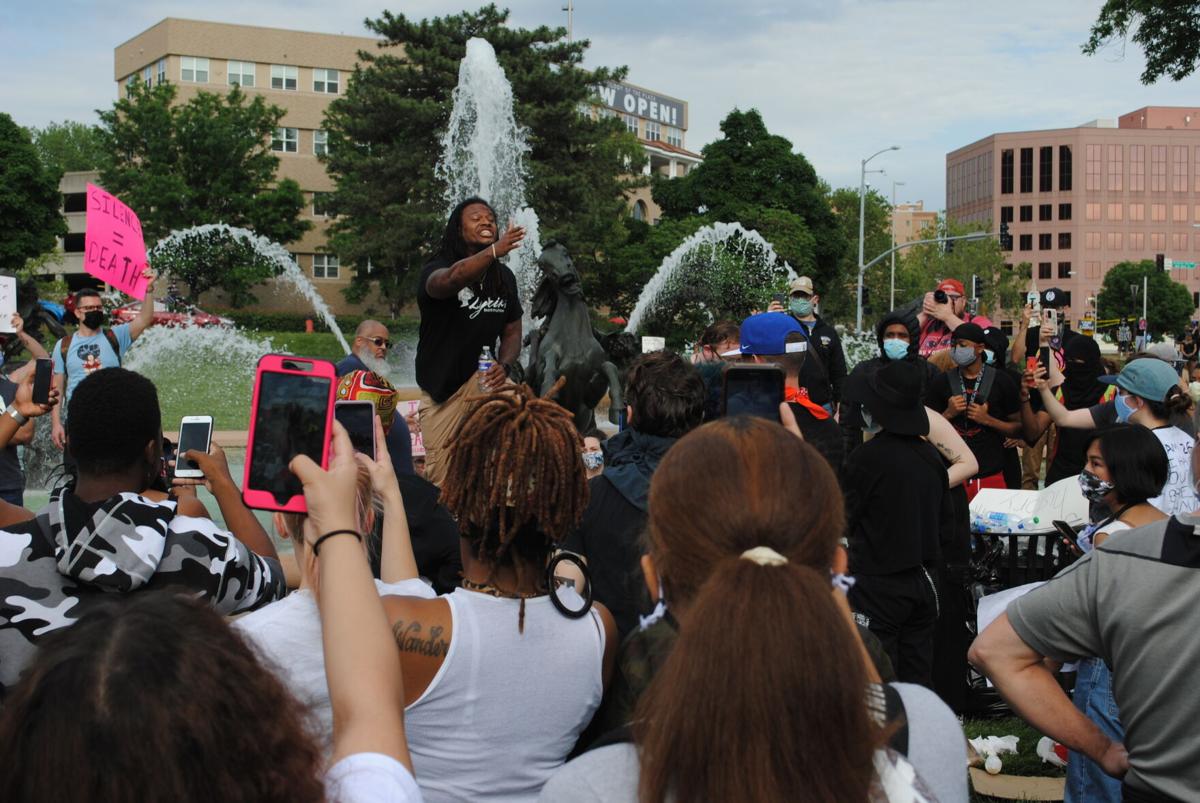 Kyle Hollins addresses the crowd from atop a bench near the J.C. Memorial Fountain on Saturday. 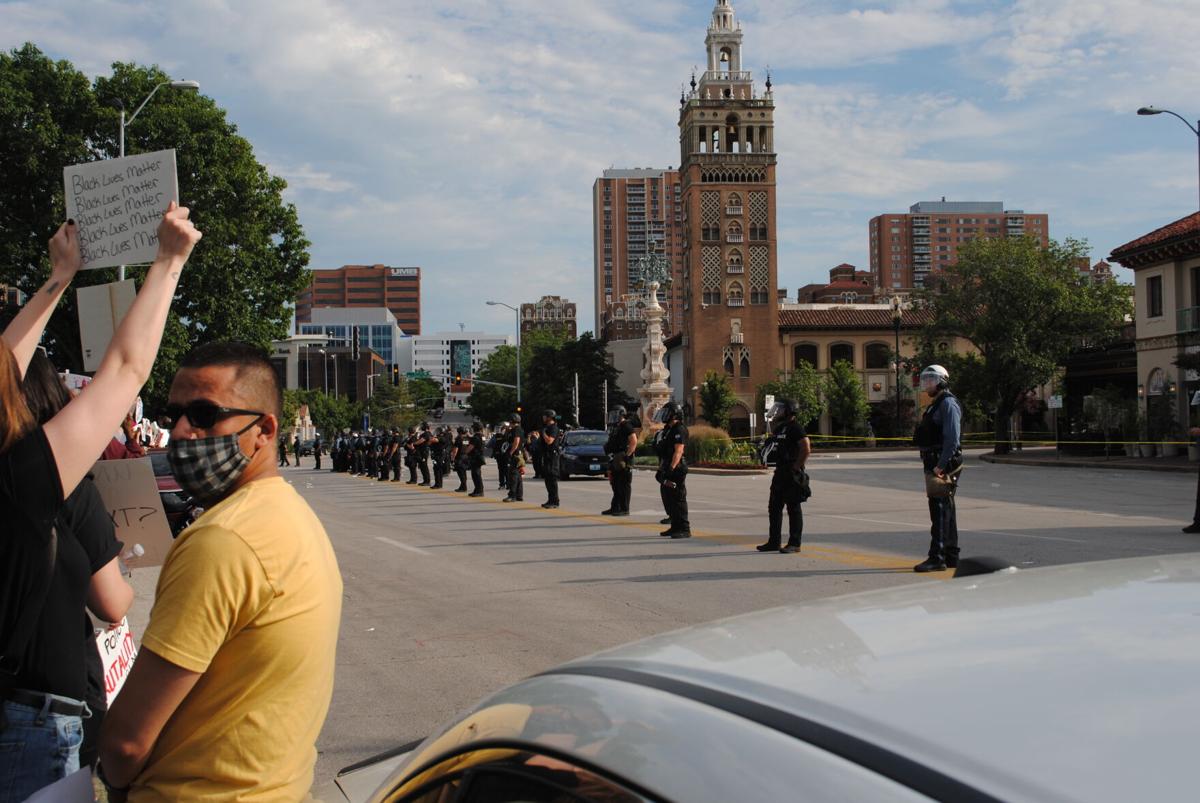 Police surrounded the protest in formation during most of Saturday's protests in Kansas City, Missouri.

Having spent much of the past weekend at protests in Kansas City, Missouri, among an almost perpetually volatile mix of angry grassroots protesters and largely militarized police forces, I have learned two things: 1) Being pepper sprayed is a searing, scorching pain that can be dulled by flushing the eyes with a solution of baking soda. 2) There is hope yet that the United States will proceed toward a time in which the deaths of innocent Black men and women will not only be met with unanimous scorn and outrage, but with concrete policy to back it up.

You heard the protesters before you saw them. This past Saturday, the initial vinyl scratches of “F**k Tha Police” by N.W.A. and profane chants directed toward President Trump echoed through the streets surrounding the J.C. Nichols Memorial Fountain, where protests in Kansas City have been centered for the last five days.

On the walk to the fountain, you saw police moving in riot gear toward the raucous crowd — plenty of zip ties and canisters of Mace strapped to their uniforms. Once there, the diverse group of protesters held signs that said things like “Black Lives Matter” and “Pigs R Beta Cucks 4 White Supremacy.”

On that day, the police set up a perimeter around a largely unorganized protest spawned by social media posts from one woman passionate about ending police brutality and the systemic, institutional racism that enables it.

I’m holding a peaceful protest in Kansas City Missouri this Saturday on the Plaza for all the black lives lost to police! SAY THEIR NAME! THEY MATTER! BLACK LIVES MATTER #GeorgeFloyd #BreonnaTaylor #CameronLamb #icantbreathe pic.twitter.com/2Mvvmr3O7k

The two groups were face to face with each other. As the heat beat down and both crowds grew more irritable, run-ins between the two became more and more frequent.

Multiple people were detained, including a young, Black woman who was holding a “Black Lives Matter” sign. Her arrest prompted the crowd to chant in unison, “Let her go!”

This was too much for a group of officers, who marched over to the protester and sprayed him, along with myself and others, directly in the eyes and face with Mace.

The crowd retreated, running back toward the fountain, many blind and stumbling to the ground, myself included. Medics were already prepared with bottles and syringes filled with milk or water with baking soda, running from person to person, washing out their eyes and applying burn cream to their faces before running quickly to the next.

Despite the abuse from the police, protesters stayed largely optimistic and, until much later and in much smaller numbers, relatively peaceful.

One man walked past me as I was being attended to by a medic and casually said, “You’re all good. Just don’t get sprayed twice in one day.”

Sunday was much more organized and exponentially more populated. Police were much fewer in number and stayed further away, abandoning the ridiculous sidewalk rule that they were so violently set on the day before.

Christina Childs, a Black woman also donning American Flag getup from head to toe, said, “I’m 38. Never in my life have I seen so much unity and different races coming together for a cause, you know, so this is a once in a lifetime thing. So hopefully we can get all the races to come together and end police brutality.”

For the majority of the day, again, the protests were not made up of the riotous looters who stayed — or in many cases arrived — after organizers had already ended their demonstration. There is no excuse for breaking into shops and stealing goods, especially not at the expense of our neighbors who own and operate a lot of these shops.

My advice to the small number of folks taking that route: please stay home. You are only hurting the movement that the rest of us are there to support.

I realize that tensions are high, that many of us have lost our jobs to a pandemic, and the deaths of George Floyd, Breonna Taylor and Ahmaud Arbery have enraged us to a boiling point. Once again, even during a global pandemic, we have to line up to demand justice for the deaths of young, Black Americans. It's incredible in the literal sense of the word.

I empathize completely with your anger. But if you have even the slightest inkling that you might be teetering on the edge of throwing a brick through a window or lighting a police car on fire — however righteous you may think it to be — just stay home.

That way, when the police Mace us, tear gas crowds with children in them, shoot at us with rubber bullets, we have that much more of a leg to stand on. We can act only in self-defense.

That way, when we talk about thrown objects, we only talk about the canisters of tear gas thrown at protesters and hurled back at the men in gas masks. That way, when our neighbors tell us we’re only criminals, and not there for the lives of others, we can laugh at them.

That way, we just might have an opportunity for justice.

Gavin Nelson is a junior from Olathe studying journalism and English.