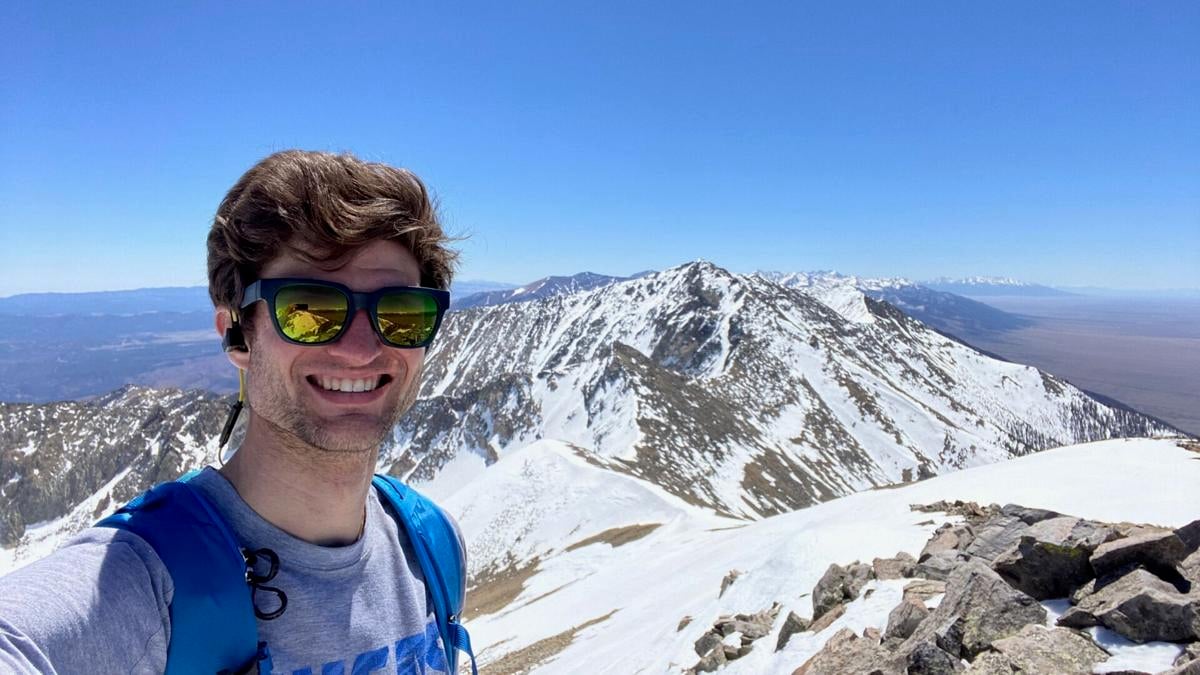 Ben Brownlee graduated from the University of Kansas in 2016. He ran cross country and track and field at KU. 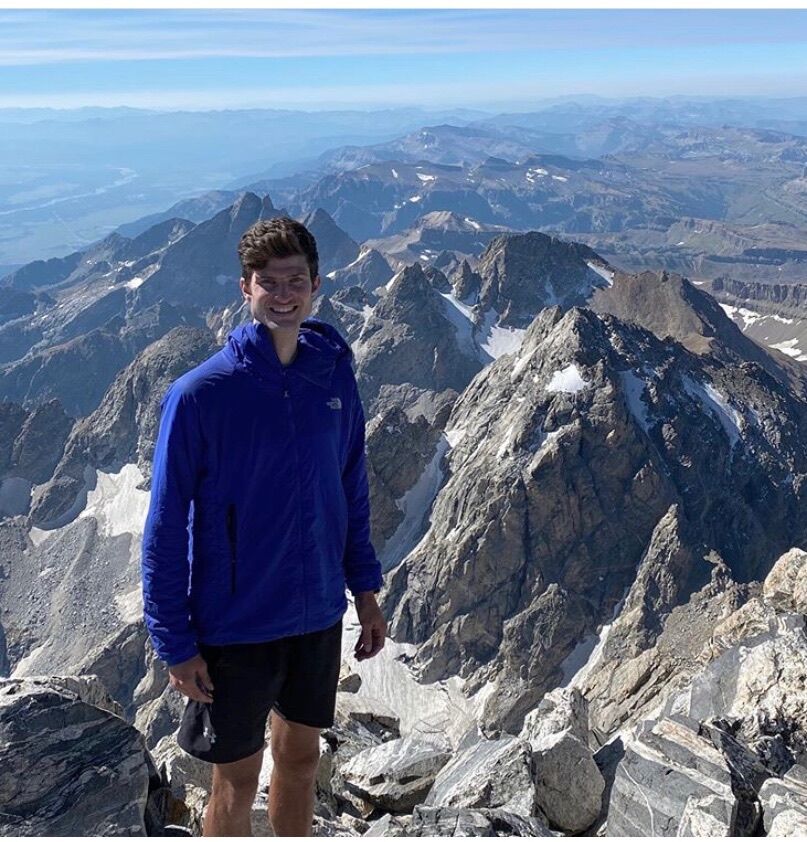 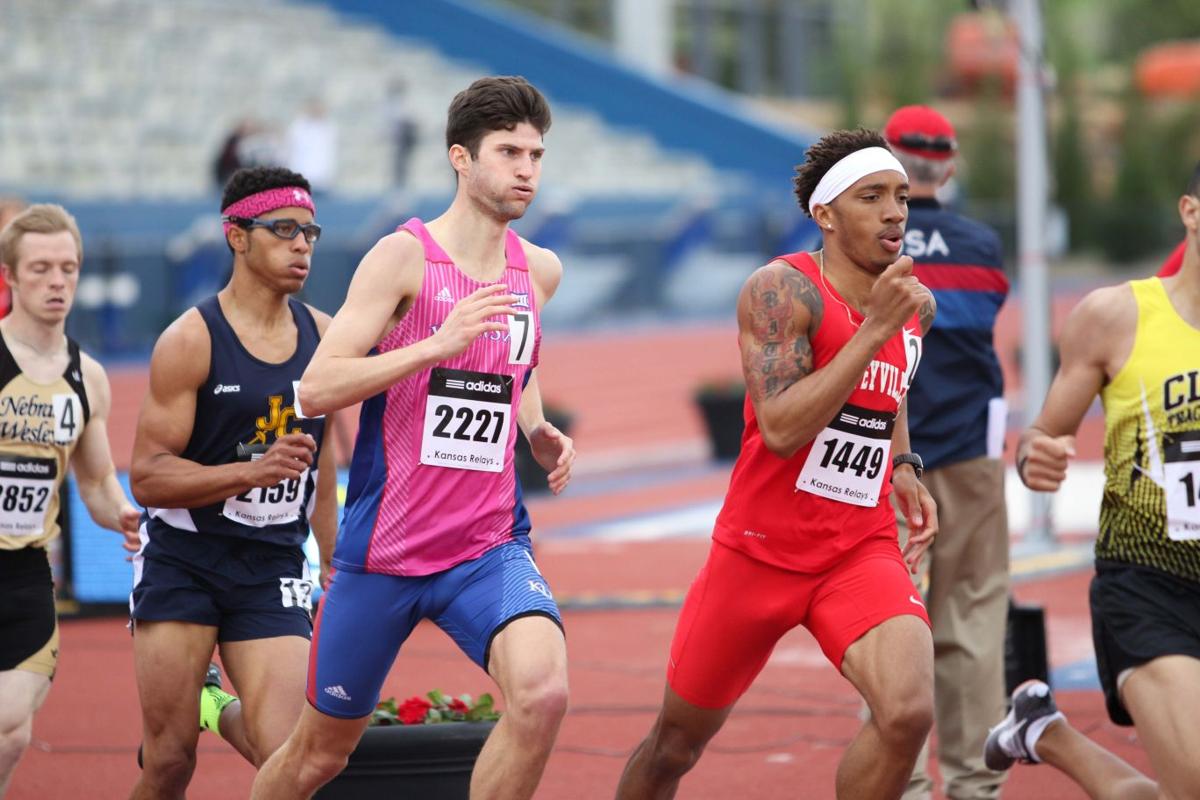 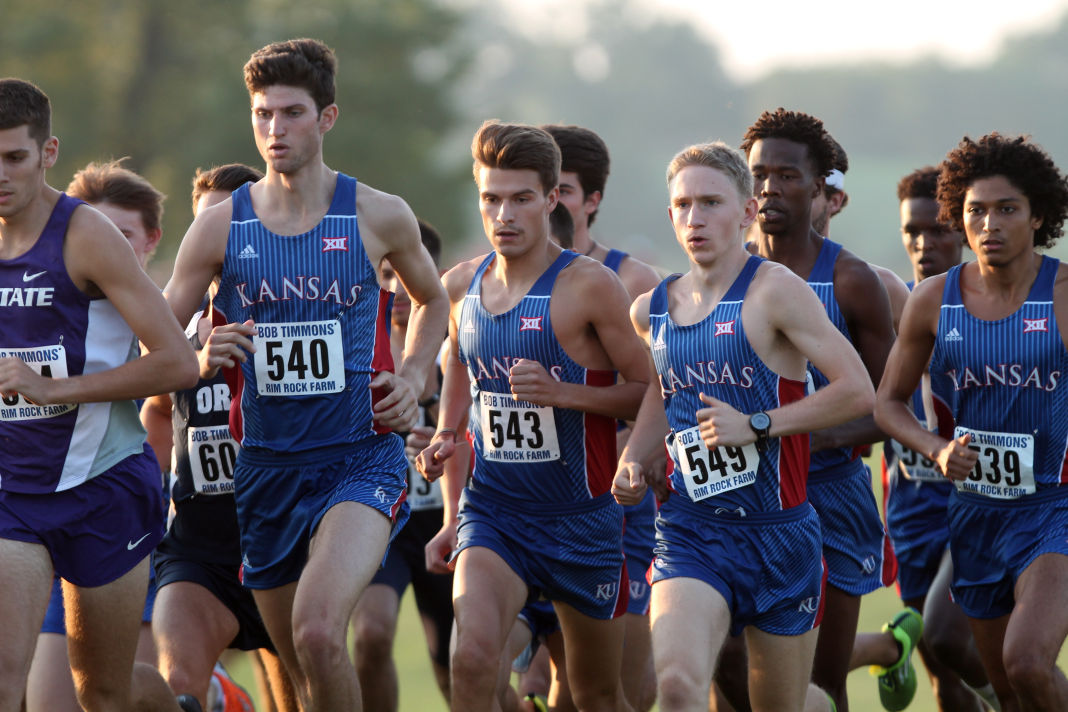 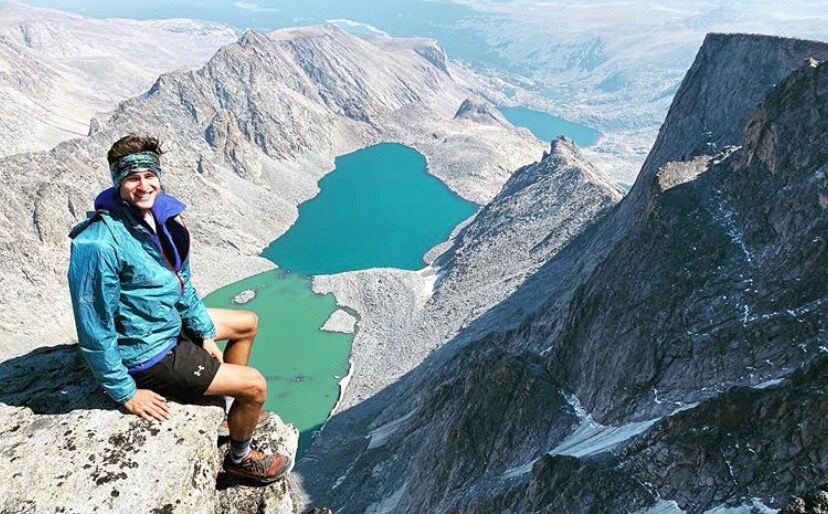 Ben Brownlee was passionate about hiking. 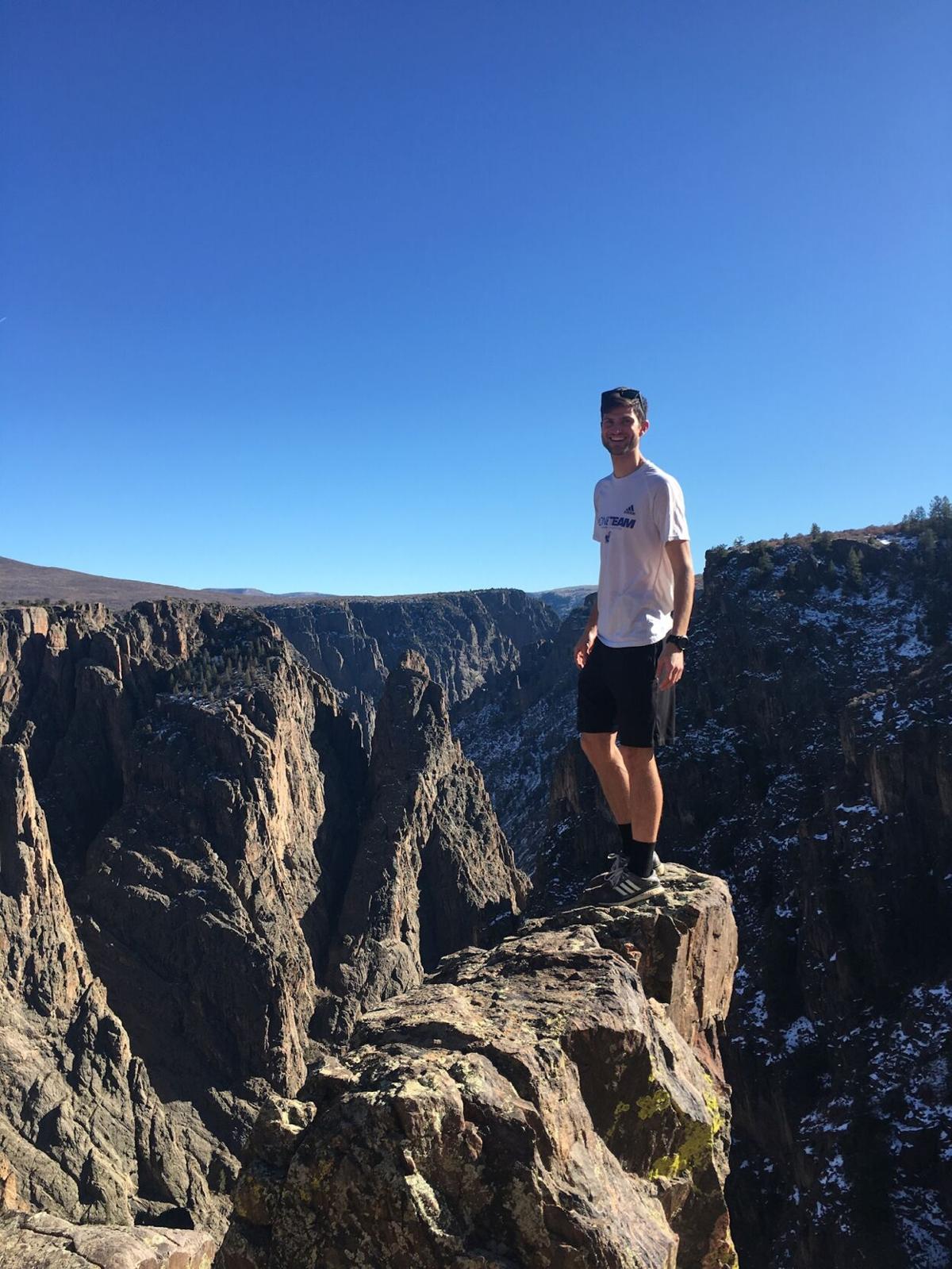 At about 3 a.m., Ben Brownlee, only 14 years old at the time, set out to solo hike Longs Peak. He couldn’t even drive himself to the trailhead — his grandparents, who owned a house in Estes Park, Colorado, gave him a ride — but that didn’t quell his enthusiasm for the pre-sunrise hike.

Part of this was because the night before, Ben pleaded with his parents, John and Jennifer, to extend his stay in Colorado to do the solo hike. His parents gave him the OK, even if they were a little trepidatious about letting their son hike a 14,259-foot mountain peak by himself.

They don’t have these kinds of mountains in Dallas, where the Brownlees lived. With this newfound freedom, Ben returned from his trek with an even greater love for both the outdoors and for hiking.

“And so that really lit a fire,” said John Brownlee, Ben’s dad. “He was, you know, super excited about that accomplishment. And he continued to want to do that.”

Ben Brownlee died at age 26 on Oct. 7 due to a climbing accident near Lake City, Colorado. But Ben’s passion for hiking, running and enjoying the outdoors guided him through life and his seemingly constant positive attitude gave him a natural attraction.

“I remember him saying, like, pretty regularly, he'd be like, ‘Wow, like, the young version of myself would be so proud of me right now, because this is always what I've dreamed of doing,’” said Hannah Walters, Ben’s girlfriend and climbing partner. “So he was always turning his dreams into a reality.”

Even though his life was relatively short, Ben’s impact — through running at the University of Kansas, coaching at Regis Jesuit High School and climbing mountains — was profound. That’s evident through the sentiments shared by those who knew him best and loved him most.

“Ben was a very generous spirit,” John said. “He was very passionate about, of course, the mountains and his friends and family and loved sharing, you know, his passions with others and loved giving back to others.”

“Because, you know, a motto from his high school in Dallas, Dallas Jesuit, was, 'Men for Others,'” John continued. “And Ben was a man for others.”

During the winter of 2013, Alexandre Lavigne, only a freshman at KU at the time, didn’t have a car. It made getting around town rather difficult.

But one of Lavigne’s friends and teammates, Ben, made sure to give Lavigne a lift whenever he needed it.

“I always felt welcomed,” Lavigne said. “And he always made sure he could help as much as he could, driving-wise.”

Another one of Ben’s teammates, Drew Matthews, said Ben brought him out of his shell, from an introverted freshman to his present-day extroverted self.

“Ben kind of helped change that for me,” Matthews said. “Really, he just made me a much more outgoing person and helped shape who I am today.”

He originally came to Kansas to continue his running career, but also as a family tradition — several members of Ben’s extended family attended KU and he had plenty of family in the area. The Brownlee family regularly spent Thanksgiving in the Kansas City area.

“Coming up on those crisp October mornings to watch his meets was lots of fun and he loved being part of it,” John said.

During his time at KU, it was also apparent Ben invested in people. Lavigne, a native of Quebec, remembers going to a Kansas City Royals game with Ben and another mutual friend during his first summer at KU. After the game, the trio ate barbecue and shared stories about growing up in Canada and Texas.

For Matthews, memories with Ben came in the form of a road trip to Panama City Beach, Florida, and watching the film “Planes, Trains and Automobiles” every Thanksgiving break before Ben headed back to Dallas and Matthews went home to Seattle.

“I mean, he would go out of his way for many people,” Matthews said. “And, you know, he really, truly, lived life to the fullest.”

Kansas track and field assistant coach Michael Whittlesey organized a Zoom meeting on Oct. 11 with about 30 of Ben's former teammates to share stories and memories. Lavigne, who was in attendance, said the communal remembrance helped put Ben’s impact in perspective.

“The grief is not resolved, not even close,” Lavigne said. “But it made us feel good to have good memories of Ben."

Climbing and coaching in Colorado

Walters said she first met Ben on a hike with the Colorado Mountain Club — a non-profit organization dedicated to preserving and educating others on the natural landscapes of the state — in July 2019.

“Ben was always climbing a new mountain, hiking something new,” Walters said. “And I think that's why we hit it off is because … I had never met someone so ambitious in the backpacking world, and that was something I was interested in too.”

John said Ben initially moved to Colorado after college to pursue his passion for climbing and mountain skiing. Within his first two years, Ben had climbed all 58 of the fourteeners in Colorado.

Later, Ben looked to conquer the top 200 highest peaks in Colorado, otherwise known as the Bicentennial peaks. He was even recently certified as a trip leader for the CMC.

Walters said Ben’s enthusiasm made hikes more enjoyable and he served as the ultimate motivator. One example was on a difficult hike this past summer in Boulder, Colorado, when the pair was nearing the fourth of five peaks they planned to hike that day.

Walters remembers both her and Ben questioning whether they should call it a day at the next trailhead. However, Ben’s encouragement pushed the duo to finish the hike, even though they were physically exhausted.

“And that's just who he was, like, he never gave up,” Walters said. “We made it to the top of that peak, and it was just like, we felt like we were on top of the world together.”

His day job was as a commercial real estate broker for Transwestern in Denver. But Ben also came to Colorado — partly thanks to the advice of Matthews — to be a volunteer assistant coach for high school cross country and track and field.

“Frankly, I think they loved it, because I think they enjoyed having someone closer in age to them,” Drysdale said. “You know, they could relate to him. And so right from the get-go, he has more in common with those kids than we do.”

Ben’s work ethic was apparent in his new role as a coach. He would tweak workouts, offer notes and take a hands-on approach to coaching.

He also made time to continue pursuing his passion for climbing.

“And he still had this childlike — and I mean this, you know, in the best way possible — this childlike wonder and just a fascination with taking advantage of everything that mountains had to offer,” Drysdale said. “You know, if he had the time to go, if he could sneak away for four hours to get a hike in or something, he was on it like that.”

Regis Jesuit track and field coach Ryan Taylor said Ben’s work and life balance was motivating. On a weekend Taylor would be in a meeting, while Ben would go out for a hike.

During Ben’s short time at Regis Jesuit, he made an indelible impact, something that was fully realized after the students — his former athletes — were notified of his death. For a lot of kids, Drysdale said, this was their first real experience with grief.

A large portion of that, Taylor said, came from the investment Ben made in the lives of the kids, even outside of sports.

The students were notified the day before the regional cross country meet. Some of the varsity girls made bracelets and shirts to honor Ben, others wrote his name on their arms and legs.

“Now, you know, some of the performances weren’t great, but how do you race or do anything hard, you know, when you completely drain the gas tank with your grief the day before?” Drysdale said. “But I think [with] the kids, it really helps the kids manifest their feelings in a really important way.”

Several of those students were able to share their stories of Ben at a service held in Denver last Tuesday. The service was emotionally difficult, Walters said, but “everyone left feeling connected.”

It was Ben’s passion for everything he did, Taylor said, that made him such an important figure at both Regis Jesuit and everywhere he went.

Drysdale and Taylor said they’re working on a way to honor Ben’s impact and legacy at Regis Jesuit, possibly by including his name at their home track meet. The varsity boys team is planning on naming one of their training routes in honor of Ben.

The four-year cycle of both high school and college sports makes this slightly more challenging, Drysdale said. In a short time, Regis Jesuit will have athletes that won’t even have known Ben.

“But it's imperative that what we do [to remember Ben] is lasting, because we do want [to honor] what he brought to our program,” Drysdale said. “Because the last thing you want to do is four years from now, when the kids are gone, that his memory goes too. I don't think that does him justice.”

Ben Brownlee is survived by his parents, John and Jennifer, his brother, Ethan, and his sister, Heather.