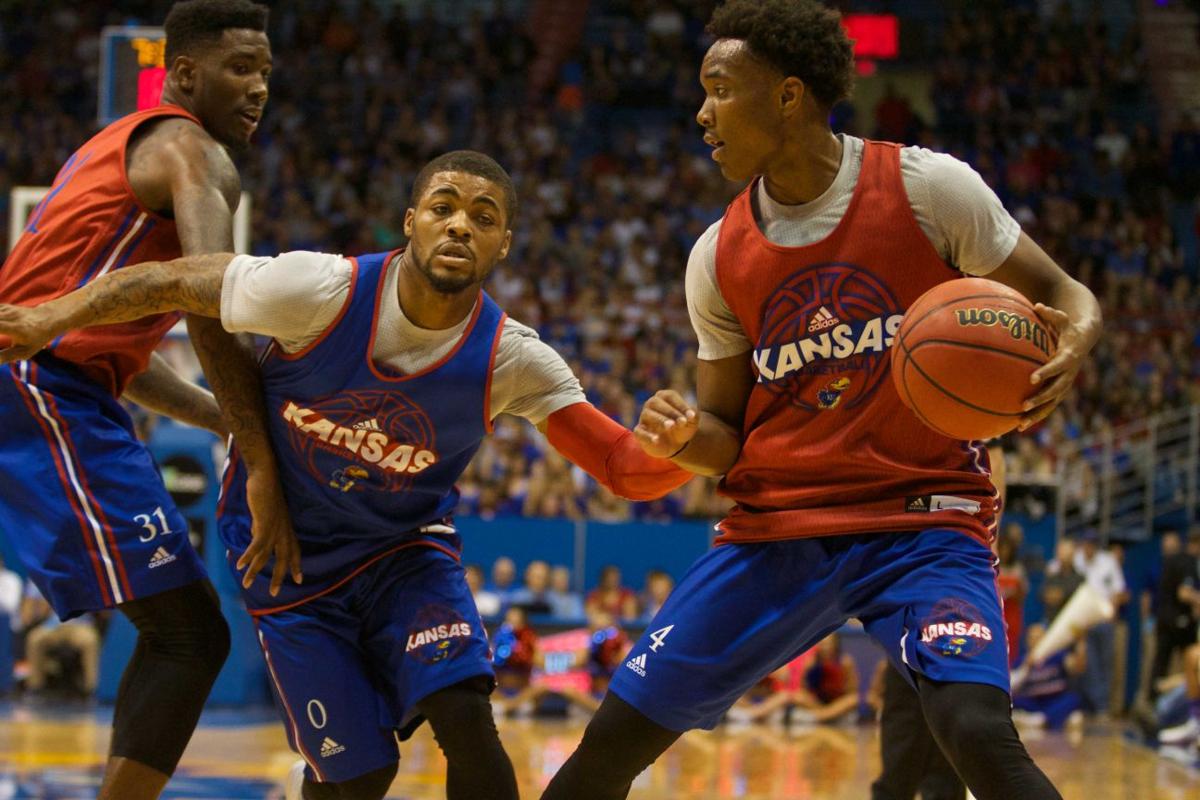 Then-sophomore guard Devonte' Graham handles the ball at Late Night in the Phog 2015. 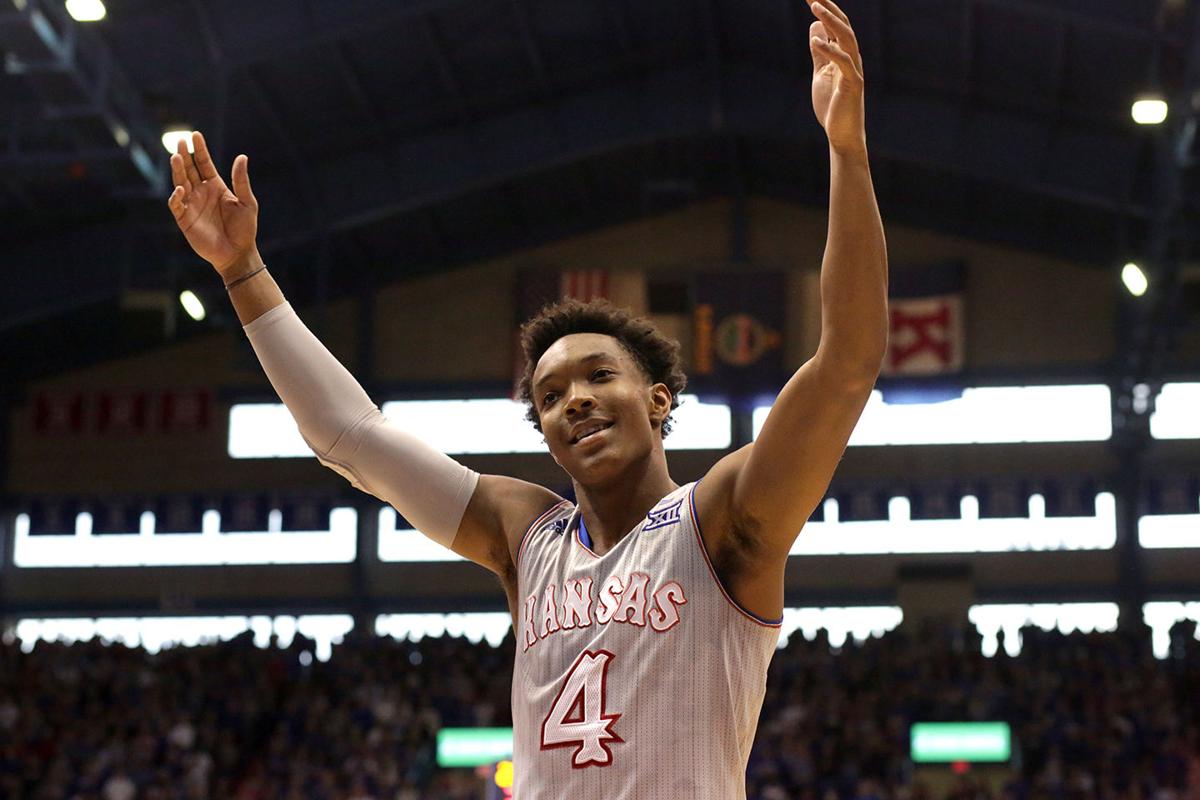 Devonte' Graham pumps up the crowd before the game against Harvard in the Allen Fieldhouse Dec. 5. 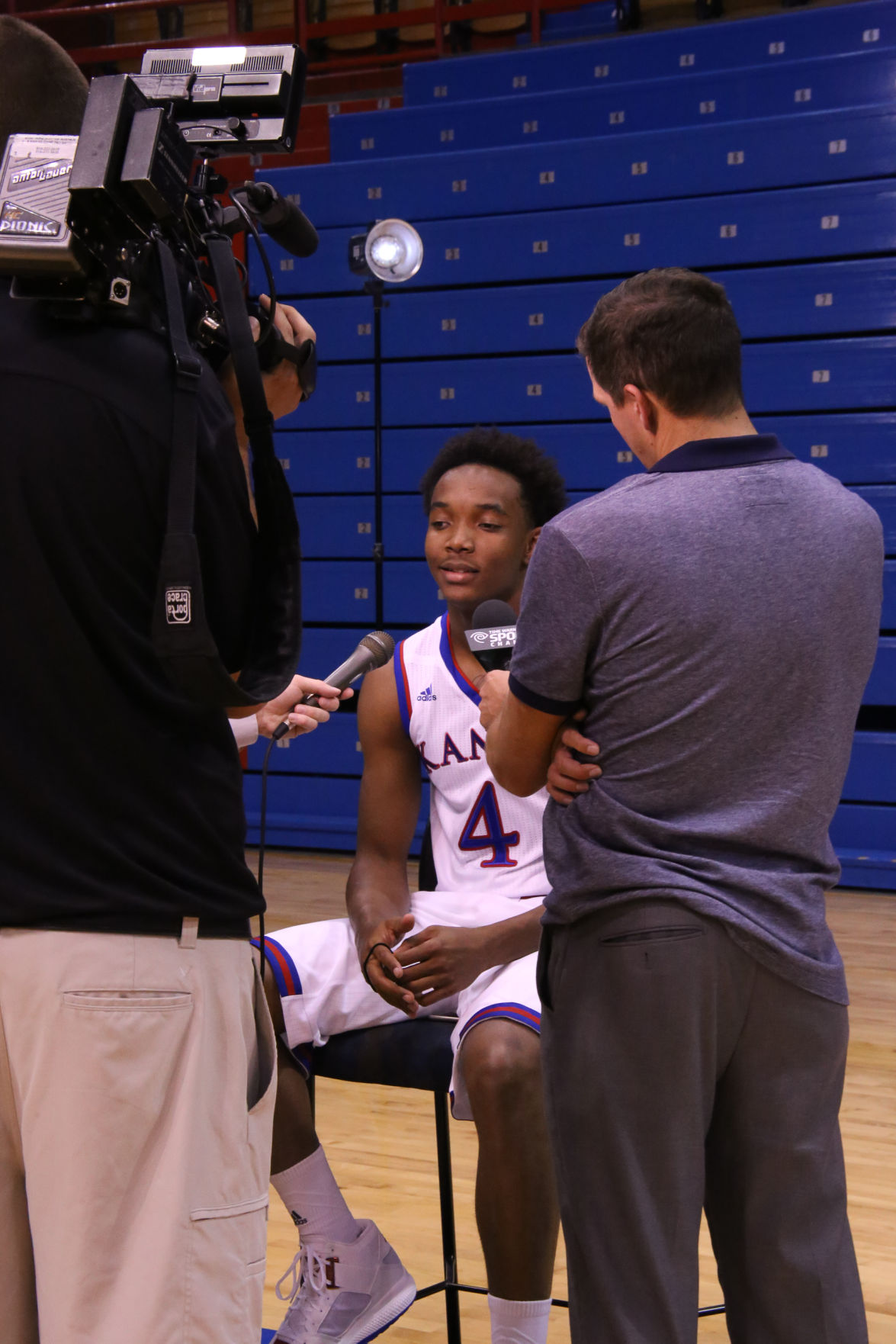 Devonte' Graham wears a hairband on his wrist to symbolize his relationship with his little sister.

Then-sophomore guard Devonte' Graham handles the ball at Late Night in the Phog 2015.

Devonte' Graham pumps up the crowd before the game against Harvard in the Allen Fieldhouse Dec. 5.

Devonte’ Graham sits at his locker, getting ready for the upcoming game. He reviews a gameday text from his mom, throws on his jersey and enjoys a pre-game meal of Fruit Gushers. He sees the trainer to get his ankles taped — always the left before the right — and pulls a padded shooting sleeve over his right arm to help provide some comfort to what he describes as a sore elbow.

However, there’s one more thing he has to do before he’s ready for the game.

He reaches down and pulls a hairband off his right wrist. He tosses it to one of the managers to keep until after the game.

That hairband, something that might be disregarded by many, carries special meaning to Devonte', now in his second year as a point guard at the University of Kansas.

Devonte's been wearing the hairband long enough for it to feel like second nature. He says he keeps it with him wherever he goes, and he doesn't quite feel right without the reminder of his 13-year-old sister.

However, he has to take the hairband off during games because of the league rules, although he’s quick to ask for it back after the buzzer sounds.

And one time, he even managed to sneak it into a game — well, sort of.

At Late Night in the Phog, which is technically classified as a practice, Devonte’ played in the scrimmage with the hairband on his wrist. And even though his coach — Bill Self — has a strict rule about players wearing various items during games, Devonte’ wasn’t too concerned about sporting the hairband.

“[Coach] probably didn’t even notice,” he said with a laugh.

For Devonte’, basketball has always been more than a shared experience with his teammates, and it’s evident in just about everything he does. He began playing the sport at just four years old when his mother, who was 18 at the time, put a basketball in his hands, something he hasn’t forgotten about to this day.

“That’s kind of why I wear the number four,” Devonte’ said. “It just puts a smile on my face.”

Sports has always been a family affair for Devonte’. Back in Raleigh, North Carolina, he’d go with his mother and sister to a nearby Buffalo Wild Wings to eat as a family and watch some games, although that tradition hasn’t quite died now that he’s in Lawrence.

Devonte’ said his mother and sister still go there on Tuesdays, though he isn’t always completely removed from the dinners; they pay special attention to the televisions when Kansas is playing.

Even when Devonte’ takes off the jersey, there are reminders of his family everywhere. He has tattoos representing his sister, mother and grandmother — all of whom played a significant role in his upbringing.

“Those are my three girls,” Devonte’ said. “They’re my rock.”

Dewanna King, Devonte’s mother, had him when she was just 14 years old. They first lived with Graham’s grandmother, Doris, in the Southgate Community of Raleigh, North Carolina.

Later, Devonte’ and Dewanna would experience a slight change in scenery, moving to Crawford Drive, about a block down the road. There, the two would bond over basketball — among other things — something that has continued to keep them connected.

Before every game, there’s usually some kind of communication between the two of them, whether it’s over text, phone call or FaceTime. And afterward, Dewanna usually has some words of wisdom for her son, though that’s not always how he views it.

“Well, my mom criticizes me after every game,” Devonte’ said with a smile. “She’s just straightforward. If I suck, she’ll be like, ‘You sucked tonight.’”

Dewanna views the conversations a little bit differently. She said her message varies game to game, though she’s never going to sugarcoat her thoughts.

“The truth never hurt anybody,” Dewanna said. “They just tell you it hurts.”

Meanwhile, Devonte’s sister, Shamaria Massenburg goes about those postgame phone calls in a different way. Devonte’ said regardless of how he thinks he played, she always tells him “good game.” He said he feels like he can’t let her down on the court, and, in the end, their conversation is usually the same.

“I always play good, to her,” Devonte’ said.

However, while it may not be as unconditionally positive, Dewanna’s postgame critique comes from a place of love. Dewanna, who said she cherishes the time she gets to spend with her son, has only been able to see him in-person twice since August.

She’ll see him just once more this year — at Christmas, when the team gets two days off — and she expects it to be just as emotional as every other time they've seen each other since he arrived at the University.

“When I see him, when I have to leave him, I’m always crying,” Dewanna said. “Words can’t really explain how proud I am.”

The bond Devonte’ shares with his mother is special to him, as is the one he shares with his sister, Shamaria. Devonte’ was already seven years old when she was born, and, as the big brother, he quickly found his way.

In many ways, Devonte’ is the same as every big brother. He said he and his sister would get along well most of the time, but he also found chances to mess with her and then cover it up by offering her some candy before she ratted him out to their mom.

However, as time has gone on, the relationship between them has matured, something that’s apparent every time he comes home.

“You can tell they really care about each other,” Dewanna said. “And you can see it even more now that he’s been gone. When he comes home, they’re kind of chest bumping and doing the ‘I miss you stuff.’”

With Devonte’ in Lawrence for most of the year, that “chest bumping” is reserved for only special occasions. However, even when Devonte' and Shamaria don’t see each other, they text and talk on the phone throughout the week, even when there’s nothing much to say other than a simple, "How’s it going?”

Devonte’ said he's come a long way since the days of ducking out of family photos and trying to get on his sister’s nerves, though that doesn’t mean they don’t still have a healthy sibling rivalry.

Devonte’ said Shamaria will come with him to the gym and try to play him 1-on-1, even though she's more of a volleyball player and cheerleader, as described by her brother. And with the seven-year age gap between them, she really doesn’t pose much of a challenge to her 20-year-old brother, but he's not taking it easy on her.

Does Devonte’ win a lot?

Has she ever beaten him?

Would he ever let her win?

For Devonte’, everything he does has family written all over it. The reminders of where he comes from and all the people who have helped make him who he is are everywhere.

For Devonte', his relationship with his mother and sister is a huge part of where he is.

And that's why the point guard for the No. 2 ranked college basketball team in the country sports a hairband on his wrist.

Kansan writers Shane Jackson and Evan Riggs take a look inside the matchup as the Kansas Jayhawks are set to square off against the Oklahoma State Cowboys Tuesday, Jan. 19.

The Kansas Jayhawks face the Texas Longhorns in Allen Fieldhouse this Saturday. If Texas can exploit Kansas' recent sluggish play, they may have a chance to pull an upset of the No. 3 Jayhawks.

Currently first in the Big 12, West Virginia heads to Allen Fieldhouse to take on the No. 7 Jayhawks Tuesday.

With first place in the Big 12 on the line, No. 7 Kansas heads to Norman to take on No. 3 Oklahoma.

Scott Chasen and Evan Riggs break down what it will take for the Jayhawks to clinch their 12th-consecutive Big 12 title by winning against Texas Tech Saturday. If they pull out the win, it puts them one additional title away from tying the all-time record for consecutive conference titles.

As Kansas gets set to take on Kansas State, our beat writers previewed the game and gave their score predictions.

On Tuesday at 7 p.m., the No. 4-ranked Kansas men's basketball will face off against Long Beach State.  The Kansan Sports writers break down what to expect from the matchup.