UPDATE: On Oct. 20, the FBI sent the Kansan additional correspondence saying it erred in sending the response detailed in this story. Read more here.

Clarification: An earlier version of this article incorrectly stated that the presence of FBI documents appeared to contradict what Kansas Athletics officials said after news broke of the investigation into the Adidas apparel company.

That language has been removed from the current version of this article. The Kansan apologizes for the error.

The Federal Bureau of Investigation, in response to a Freedom of Information Act request, told the Kansan on Wednesday that it has documents related to the University of Kansas and its sponsorship with the Adidas apparel company, but cannot release them due to an ongoing legal investigation.

The presence of documents responsive to the Kansan’s request, filed on Sept. 27, does not necessarily implicate the University in wrongdoing.

The Kansan asked for “all documents and communications within this investigation related to the University of Kansas and any of its sponsorship deals with Adidas or any investigation of Kansas basketball coaches.”

On Sept. 26, the FBI announced that four assistant basketball coaches from Arizona, Auburn, Oklahoma State and Southern California had been arrested on a slew of bribery and fraud charges related to the investigation into Adidas. Louisville head coach Rick Pitino was fired a short time after the arrests were made for the school’s involvement in the scandal.

Wednesday, the FBI said the material requested by the Kansan “is located in an investigative file which is exempt from disclosure.” 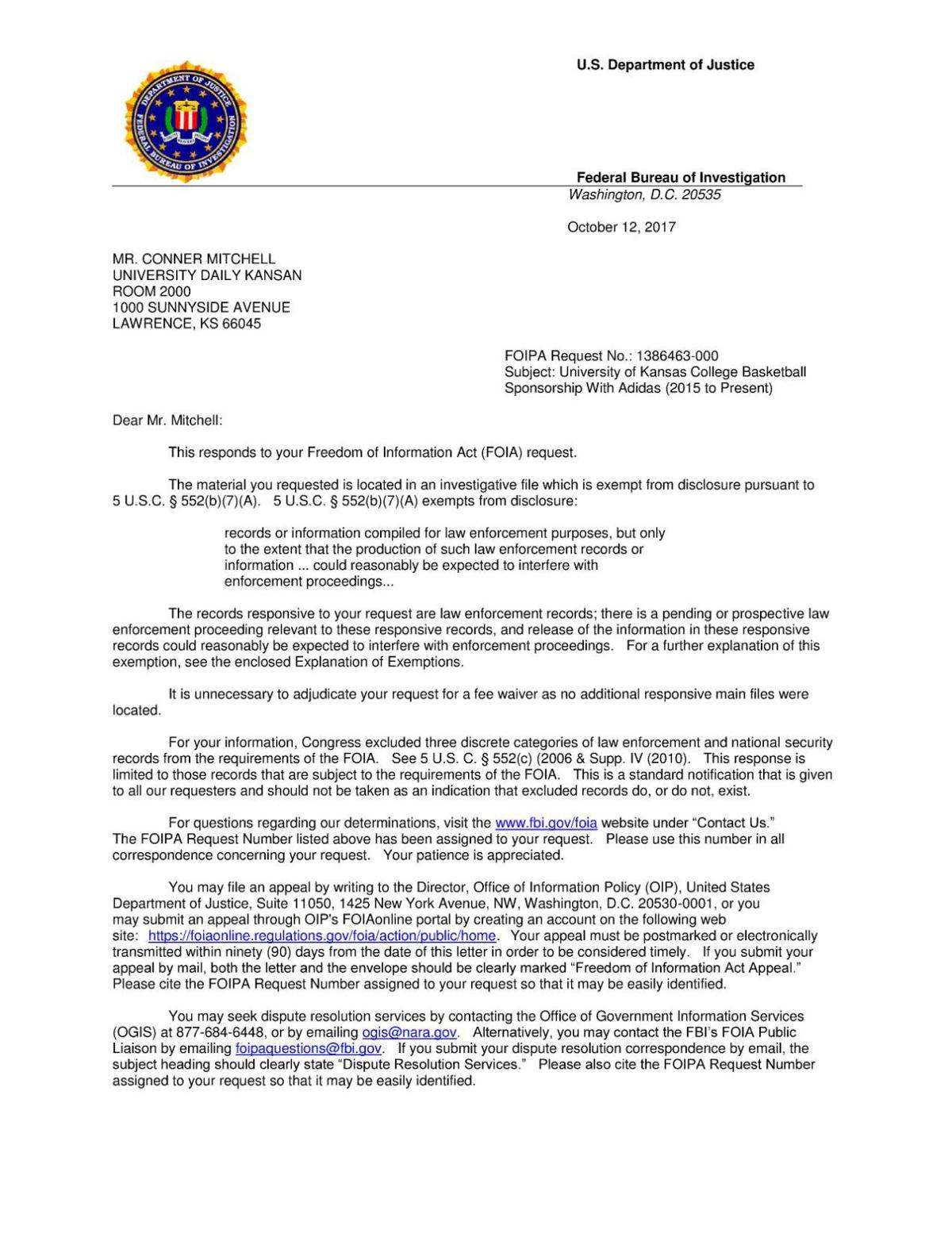 The Bureau’s letter, addressed with the subject line “University of Kansas College Basketball Sponsorship With Adidas (2015 to Present),” did not specify which portions of the Kansan’s request the responsive documents pertained to or what the documents were — only that they existed.

After the scandal broke, Kansas Athletics officials told media outlets they were aware of the news and were monitoring it, but that the school hadn’t been contacted regarding the investigation.

“I think the answer that I gave about the fact that no federal authorities have contacted us about this case, I’m just going to let that answer speak for itself,” Associate Athletics Director Jim Marchiony told the Topeka Capital Journal on Sept. 26.

When Kansan reporters visited Marchiony in his office Wednesday for comment on the Bureau’s response, he reiterated that the University had not been contacted by investigators in the case “that he knew of,” and said that he was “not even going to attempt to comment” on an FBI letter he hadn't seen.

On this week’s episode of the Mike on the Mic podcast, Kansan sports correspondent Michael Swain goes in-depth on the Adidas/college basketball scandal, Zion Williamson and possible breakout stars for Kansas basketball.

Less than a week before the scandal broke, Kansas Athletics announced a new 14-year, $191-million sponsorship contract with Adidas at a fundraising event for renovations to Memorial Stadium.

James Gatto, director of global sports marketing for Adidas, was arrested on the same day as the four coaches and placed on leave from the company. Marchiony told the Kansas City Star on Sept. 26 that Gatto’s signature does not appear on the University’s contract, as he wasn’t part of the company’s business side during negotiations.

According to the Star, the last three tweets on Gatto’s now apparently-deleted Twitter account referenced the University’s contract, which led some fans to wonder whether he was involved with it.

At Louisville, 98 percent of the money Adidas paid the school went directly toward paying then-coach Pitino, according to the Louisville Courier-Journal. That is drastically different at the University and how Kansas Athletics pays coach Bill Self, according to the Lawrence Journal-World.

Marchiony told the Journal-World on Oct. 6 that all of Adidas’ money goes directly to Kansas Athletics and Self has never had a separate contract with the company, as Pitino did.

“Whatever you’re talking about, cash or product, it all comes to Kansas Athletics first,” Marchiony told the Journal-World. “Adidas pays the school and not Bill.”

When the FBI released the indicted parties in September, it said the investigation was ongoing, which led many college basketball analysts to describe the situation as “only the tip of the iceberg.”