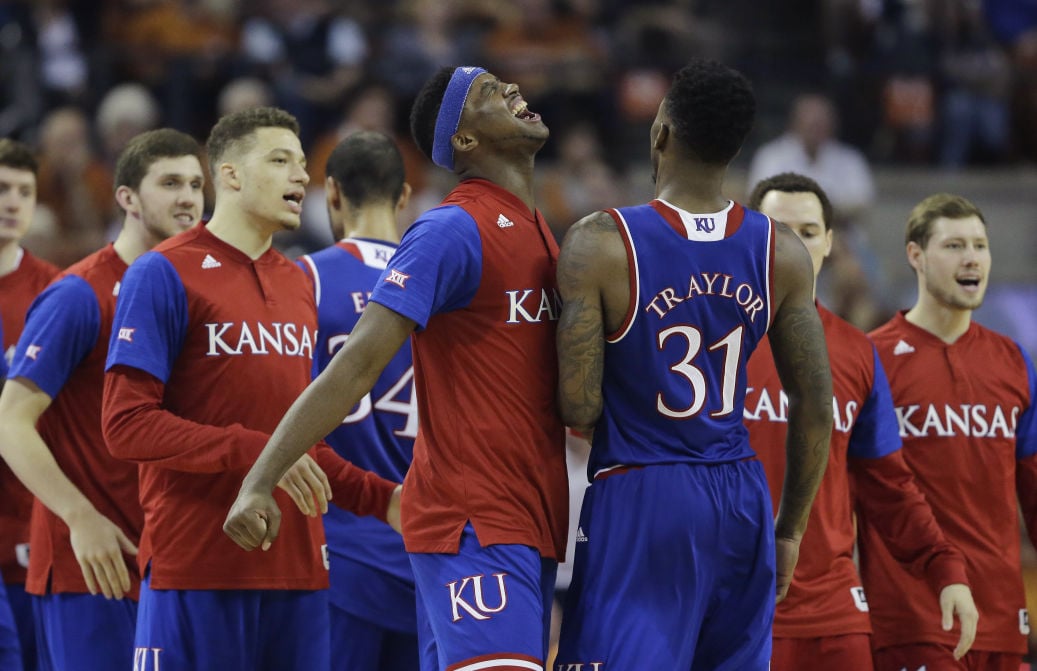 Kansas guard Frank Mason III (0) leaps in the air as he and teammates celebrate a score against Texas during the second half of an NCAA college basketball game, Monday, Feb. 29, 2016, in Austin, Texas. Kansas won 86-56. (AP Photo/Eric Gay)

Kansas guard Frank Mason III (0) leaps in the air as he and teammates celebrate a score against Texas during the second half of an NCAA college basketball game, Monday, Feb. 29, 2016, in Austin, Texas. Kansas won 86-56. (AP Photo/Eric Gay)

On Saturday, the now-No. 1 Kansas Jayhawks clinched a share of their 12th consecutive Big 12 title. On Monday, they clinched it outright.

"Today, we had a really good shootaround. It meant something to the guys tonight and they were on point and focused," Kansas coach Bill Self said in the University release. "If we played them again, it'd be a coin flip game. But, tonight, we were about as good as we've been all year."

Coming into the game, there were questions about whether or not the team might be as fired up as it was in the last game. A letdown only seemed natural, considering there wasn't all that much to play for in the game, especially with another game at home coming after in case the Jayhawks needed it to clinch the title outright.

However, the Jayhawks quickly showed that wasn't the case. The team came out on a 7-0 run. A minute later it was 9-0.

Junior point guard Frank Mason III drilled a three, and the lead was up to 12.

"This is getting embarrassing," Brent Musburger, the play-by-play announcer calling the game for ESPN, said.

Kansas would eventually get the lead to 15-0 before Texas scored its first basket, which took more than six-and-a-half minutes. Even when the Longhorns did score, the comeback was certainly far from on.

With Mason and senior forward Perry Ellis imposing their collective will in the first half, the lead quickly ballooned to 20. In the first half, Ellis scored 15 points on 7-of-8 shooting, while Mason posted eight points and three assists.

"Yeah, [Mason] was great," Self said in the release. "Perry was unbelievable."

At halftime, Ellis and Mason had combined for as many points as the entire Texas team, and if you had taken their points away, Kansas still would've been in front.

It was that kind of a performance.

As the team went to the half up 47-23, just about every player provided some contribution.

"I always want to give the other team credit. Kansas: they really attacked and played well," Texas coach Shaka Smart said in the release. "They were aggressive."

If such a thing were possible, the 24-point margin didn't accurately depict the feel of the game. The game was over, and it was over early, a sharp contrast from the last time Kansas had been the top-ranked team in the country.

The last time Kansas was No. 1, the team held the distinction for only a few games. After two close contests against the Oklahoma Sooners and Texas Tech Red Raiders, the Jayhawks lost in Morgantown, W. Va. to West Virginia.

That would start a stretch where the team lost three out of five games, which led some to panic about the prospects of Kansas winning the Big 12.

Instead, Kansas responded by rattling off 10 wins in a row, the last of which was certainly the most dominant.

"We didn't want to come out flat and think the league was over," Graham said in the release. "We wanted to come out and win it outright."

With 15 minutes to play in the game, Kansas was ahead 60-32. The team was shooting 10-of-13 from three, and no cracks were starting to show in the armor.

Similar to how there hadn't been a letdown coming into the game, there wasn't a letdown out of the half. Kansas had extended its lead through the first five minutes, with four of the five starters each recording a basket.

In fact, from the under-16 media timeout until Texas took a timeout with 13 minutes to play in the first half, Kansas was on an 8-2 run.

Frank Erwin Center was quiet for the rest of the night, less one moment when senior forward Jamari Traylor dunked all over Texas guard Eric Davis Jr.

"Oh myyy gooooodness! He went to the 3rd floor!" https://t.co/JfvQ3Hda8q

Like the announcers, the Kansas bench erupted, as the team would ride the wave of momentum, finishing with a 30-point win.

"We just wanted to come out and play aggressively and show the great team that we are," Ellis said after the game. "We came out and defended well and their shots weren't falling."

Next up: Kansas has one last game in conference play before the Big 12 Tournament. The team will return home to take on Iowa State in Allen Fieldhouse on Saturday.

Evan Riggs and Shane Jackson break down the lineups, what Kansas will have to do and who will have to shine in order for the Jayhawks to win on senior night against Iowa State.