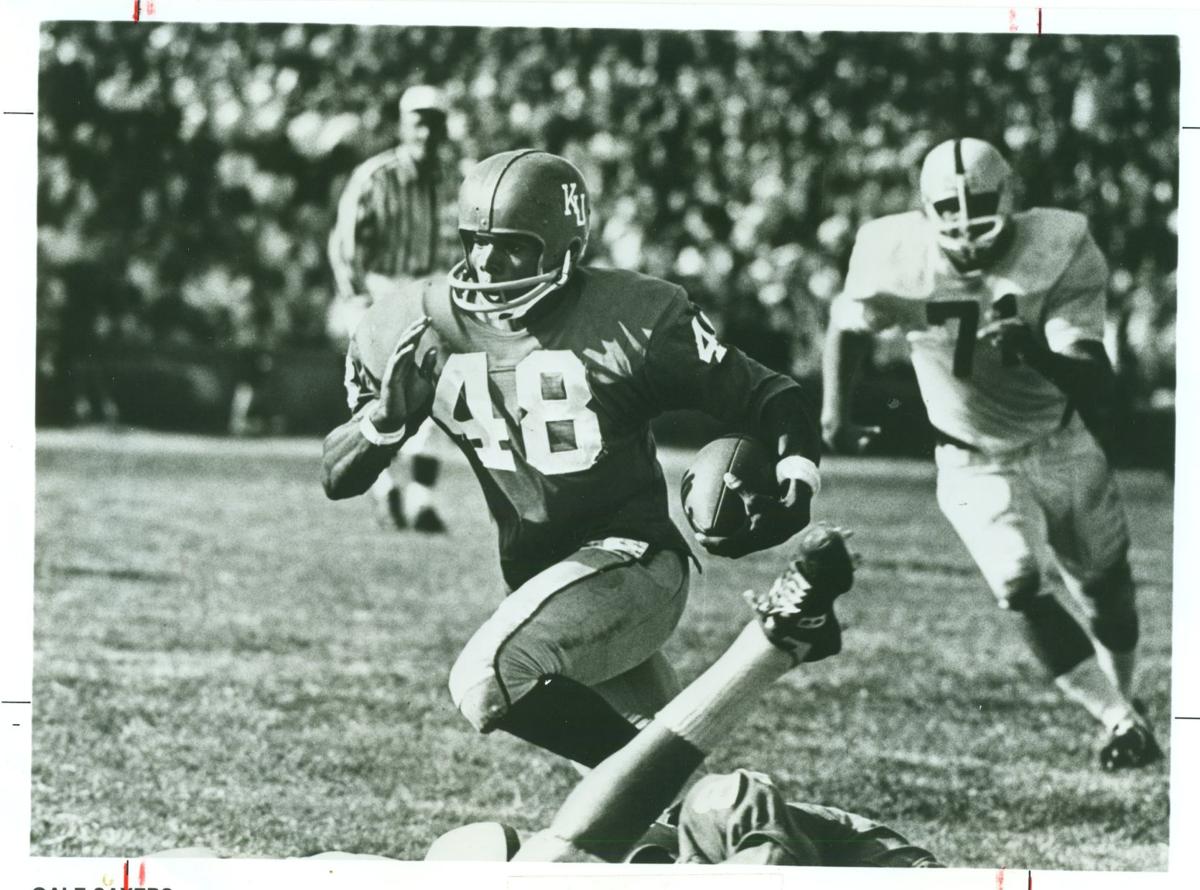 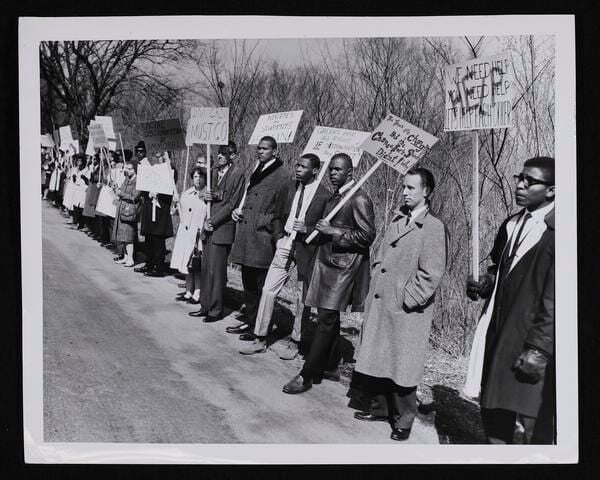 In 1964, a line of student marchers, including KU football players Michael Shinn and Gale Sayers, advocate for fair housing.

Former Kansas football legend and Chicago Bears Hall of Fame running back Gale Sayers died after a battle with dementia at age 77 Wednesday.

Also known as the "Kansas Comet," Sayers was a two-time All-American selection and led the Jayhawks in rushing, touchdowns and kickoff returns in his three years at Kansas (1962-64). Sayers, a Wichita native, also amassed 2,675 career rushing yards and 3,917 all-purpose yards as a Jayhawk.

“We are saddened to hear of the passing of Kansas great, Gale Sayers,” said Kansas football coach Les Miles in a Kansas Athletics news release. “I cherished every opportunity to watch him play and I am privileged to coach in the stadium that he once played in. He had a remarkable impact on the game of football and the University of Kansas, and my thoughts and prayers go out to his family.”

Kansas Athletics Director Jeff Long pointed to how only three numbers are retired in the history of Kansas football, including Sayers’ No. 48 jersey.

“One of the greatest, if not the greatest, players to ever wear a Kansas football uniform, Gale Sayers was a trailblazer on and off the field,” Long said in the release.

Part of that impact off the field came from Sayers' outspoken support of racial justice. Sayers and 110 other KU students were arrested in 1964 for participating in a sit-in demonstration outside of Chancellor W. Clarke Wescoe's office in Strong Hall to protest discrimination in fraternities, sororities and on-campus housing.

"They accept me as a football star, but not as a Negro," Sayers was quoted as saying at the time.

"They accept me as a football star but not as a Negro." Gale Sayers': "final major gesture" as a college student: getting arrested at the University of Kansas in the name of racial justice. Rest in Power. (HT @loumoore12) pic.twitter.com/R1ysSCiuil

Sayers was later drafted in the first round of the NFL Draft by the Chicago Bears in 1965. He went on to have an esteemed professional career and spent seven seasons in the NFL with the Bears.

Sayers also made his mark in special teams with eight touchdowns on kickoff and punt returns. He was named to five-straight All-NFL teams and was a four-time pro bowler.

However, Sayers' professional career was cut short due to a multitude of knee injuries. He announced his retirement in 1971.

Sayers was also portrayed in the 1971 TV movie “Brian’s Song,” which depicted Sayers’ bond with Bears teammate Brian Piccolo. Sayers and Piccolo were the first interracial roommates in NFL history.

“Sharing a room with Brian Piccolo — the first interracial roommates in the NFL — set an example for racial equality in the [NFL] and across the country,” Pro Football Hall of Fame CEO David Baker said in a statement. “In many ways, our country is still trying to emulate the courage, commitment, compassion and excellence Gale has demonstrated since first setting foot on a football field in Kansas.”

Actor Billy Dee Williams — who portrayed Sayers in the film — shared his condolences on Twitter Wednesday.

“My heart is broken over the loss of my dear friend, Gale Sayers,” Williams said. “Portraying Gale in 'Brian’s Song' was a true honor and one of the [highlights] of my career. He was an extraordinary human being with the kindest heart.”

My heart is broken over the loss of my dear friend, Gale Sayers.Portraying Gale in Brian’s Song was a true honor and one of the nightlights of my career. He was an extraordinary human being with the the kindest heart.My sincerest condolences to his family 💔#RIPGaleSayers pic.twitter.com/OyQRlwuznU

In 1977, Sayers was the youngest player ever to be inducted into the Pro Football Hall of Fame at age 34.

“The 'Kansas Comet' burst onto the scene in the National Football League and captured the attention of all of America,” Baker said. “Despite playing only 68 NFL games because of an injury-shortened career, Gale was a clear-cut — and first-ballot — Hall of Famer for his accomplishments on the field and for the man of character he was in life.”

After his retirement, Sayers worked as a philanthropist to Chicago youth. He also served as an assistant athletic director at Kansas (1972-76) and athletic director at Southern Illinois (1976-81). Sayers was later inducted into the John McLendon Minority Athletics Administrators Hall of Fame in 2009.

Following the news of his passing, several took to Twitter Wednesday to share their memories of Sayers.

“He carried himself with class and always encouraged our players to earn their degrees. He talked more about life than football!” Mangino said on Twitter.

Gale was great player, but he was so much more. He carried himself with class and always encouraged our players to earn their degrees. He talked more about life than football! #KU lost a legend!#TheKansasComet #RIP https://t.co/gNExCs6VIN

Kansas Gov. Laura Kelly said that Sayers was “one of the best” to play the game of football.

“He was more than just a football legend — he was a kind, inspirational, and compassionate man,” Kelly said on Twitter. “We lost an extraordinary Kansan today.”

Wichita Native and "Kansas Comet" Gale Sayers was one of the best to play. He was more than just a football legend--he was a kind, inspirational, and compassionate man. We lost an extraordinary Kansan today. https://t.co/NOhzVAjRMj

The Pro Football Hall of Fame’s Twitter account shared a video on social media to remember the career of Sayers.

“The entire Pro Football Hall of Fame family mourns the passing of Gale Sayers,” the tweet read. “Our thoughts and prayers are with his wife, Ardie, and their entire family. We will forever keep his legacy alive to serve as inspiration for future generations.”

The entire Pro Football Hall of Fame family mourns the passing of Gale Sayers. Our thoughts and prayers are with his wife, Ardie, and their entire family. We will forever keep his legacy alive to serve as inspiration for future generations.#HOFForever | @ChicagoBears pic.twitter.com/sLYdu9w0s2

NFL Commissioner Roger Goodell also released a statement, remembering Sayers for his impact on and off the field.

“Gale was an electrifying and elusive runner who thrilled fans every time he touched the ball,” Goodell wrote. “He earned his place as a first-ballot Hall of Famer.”

“We will also forever remember Gale for his inspiration and kindness,” Goodell continued. “Gale’s quiet and unassuming demeanor belied his determination, competitiveness and compassion.”

Long also said in the Kansas Athletics release that a statue of Sayers will be unveiled at halftime of Kansas football’s game against Oklahoma State Oct. 3. Long said Sayers was involved in the creation of the statue and was able to see a photo of it before he passed.

The statue will be a way to “forever immortalize another KU football legend,” Long said.

“His achievements on the field are well documented and he certainly left his mark on the KU football and NFL records books, but Gale Sayers was far more than a football player, he is one of the finest men to ever grace our program,” Long said. “We are so proud of the way he represented our University and the entire State of Kansas.”