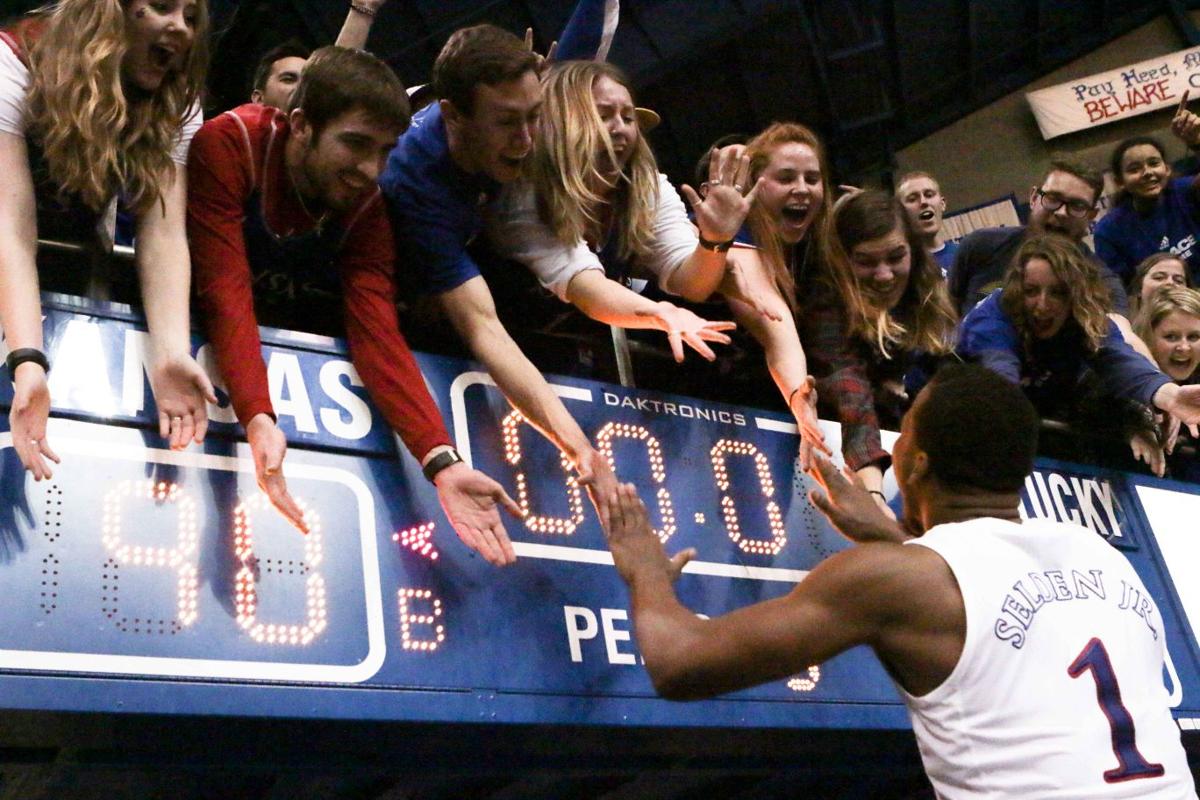 Wayne Selden Jr. celebrates with the fans after scoring 33 points in Kansas' 90-84 overtime victory against Kentucky. Selden's 33-points in the game led all scorers and were a career-high. 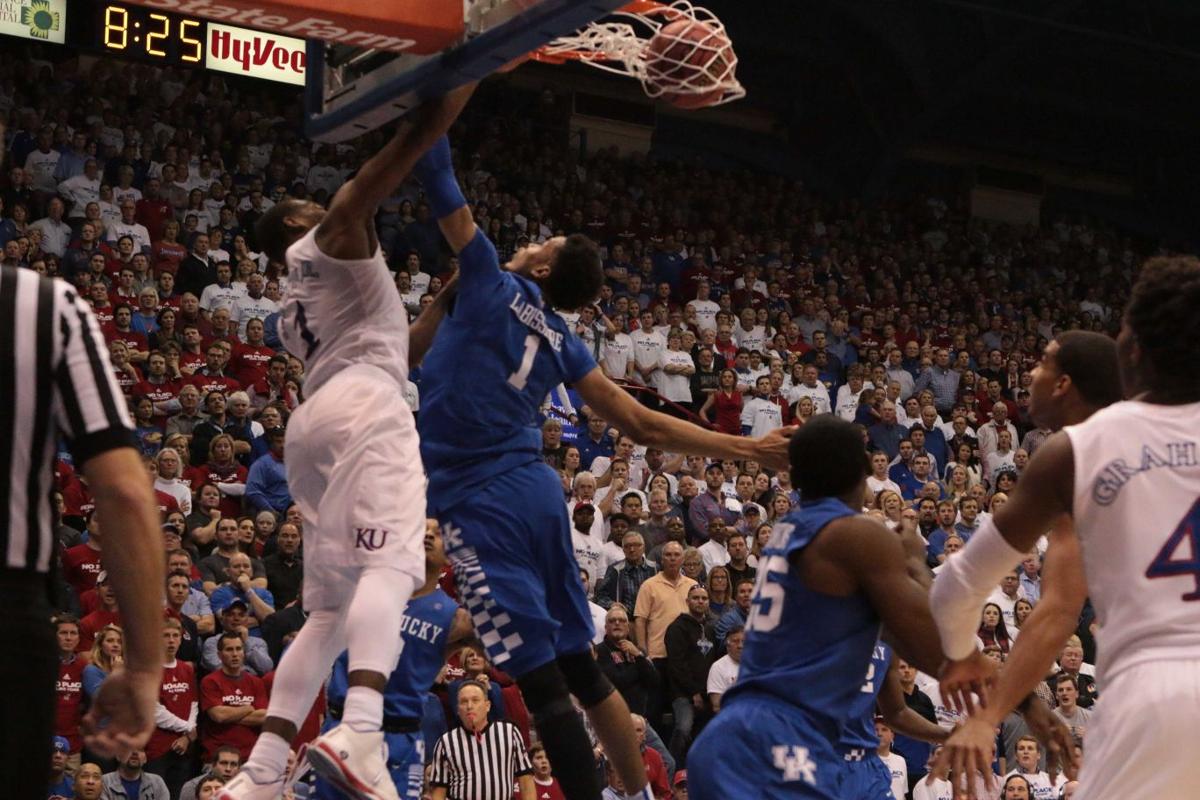 Back in November, Kansas guard Wayne Selden Jr. headed to the line against Vanderbilt with a chance to set a new career-high in scoring. He had 25 points, and needed just one free throw to set the mark.

He missed both and then two more free throws later in the game.

A couple of months later, against Baylor in Allen Fieldhouse, Selden was in a similar position. With 9:25 to play, he scored his 24th point of the game. But he still couldn't get over the hump.

Over the ensuing nine minutes, he missed a free throw, a jumpshot and a three-pointer, as the mark improbably remained.

On Saturday, it finally fell.

Against Kentucky, Selden knocked down a crucial go-ahead three with less than 40 seconds remaining to put Kansas in front. The basket gave him 26 points, but, for the game, which Kansas won in overtime 90-84, he was far from done.

“That’s probably as good a game as he played since he’s been here,” Kansas coach Bill Self said of Selden. “That looked like Wayne in Korea. He was great.”

For Selden, the game was special for a few reasons. Not only did he post perhaps the best performance of his Kansas career, but his grandfather, who drove to Lawrence for the game from Massachusetts, was in attendance.

In order to be there for the game, Selden's grandfather made the drive over the course of a couple of days, but his trip wasn't complete until he talked to Self pre-game and gave him a message.

“He told me this afternoon, ‘[Wayne] better play good. I came a long way to watch this,’” Self said. “I think grandpa got his money’s worth.”

Certainly, before the game, the atmosphere fit the bill of a college basketball classic. The noise level in the arena reached over 117 decibels, according to the video board, which marked the first time it'd reached that level all year.

“It was crazy,” Kentucky forward Alex Poythress said after the game. “[It was] the loudest atmosphere I’ve ever been in.”

But, as the game started, it was not quite the contest many had hoped for. Early on, sloppy play and a host of whistles bogged down the game. Kentucky guard Isaiah Briscoe was whistled for a technical foul less than 90 seconds into the contest, while Kansas was over the foul limit before the second media timeout.

Throughout the first half, neither team was really able to take advantage, as they battled back and forth with clashing styles. Interestingly enough, it was Kansas, the team maligned for its use of freshman — or perhaps lack thereof — who was the first to turn to its less-experienced big man.

Freshman forward Cheick Diallo was the first player off the bench for Kansas — or either team for that matter — entering the game after junior big man Landen Lucas committed an offensive foul.

Diallo played eight minutes in his first stretch on the court, which was actually double what he had played in the team’s last two games. However, it was the other freshman who really left his mark on the game for Kansas.

Freshman forward Carlton Bragg Jr., who accidentally started to say “Kentucky” when announcing his college decision last year, filled right in for senior forward Perry Ellis, who was saddled to the bench with a couple of early fouls. Often one of the most energetic players on the team, Bragg knocked down three shots, two of which rattled all the way around the basket before finally dropping.

In a tense, stressful atmosphere, it was clear Bragg was just having fun. He had a goofy smile on his face, moving his hands with a sort of “count-it” gesture.

In the first half, the freshman advantage went to Kansas. But Kentucky was able to swing the tide another way.

Sophomore point guard Tyler Ulis and senior forward Alex Poythress were dynamic, answering whenever the Kansas crowd came to life. Poythress even knocked down a corner three, which was significant considering he entered the game making just one of his last 24 from distance.

Shooting a combined 10-of-12 from the field, the two kept Kentucky in front, as the visitors led by six at the half, much to the chagrin of those in attendance.

However, the angst of the Kansas fans quickly turned to applause as a video package was shown honoring booster David Booth, who previously bought Dr. James Naismith’s original rules of basketball to donate to the University.

“Your excitement makes it all worthwhile,” he said to the crowd, before walking off with a “Rock Chalk Jayhawk.”

In the second half, Kentucky kept the lead at a similar margin, as Kansas reverted to a triangle-and-two defense. However, it wasn't the team’s defense that grabbed the attention of the fans as much as the offense from Selden.

Selden scored 10-straight Kansas points over a three-minute stretch, leaving him two shy of his career-high of 25. With Selden carrying the load on one end, the defense finally tightened, and the Jayhawks had a chance to tie the game at the line and even take the lead.

“They were ahead most of the game, but we all knew deep down we were going to come back,” Selden said.

However, the game was far from over.

A few missed free throws by Ellis and sophomore point guard Devonte' Graham left the door open for Kentucky to pull back in front, as the college basketball heavyweights went back and forth over the final few minutes.

With 40 seconds to go, down by two, Selden made a play that could've won Kansas the game. He knocked down a corner three-point jumper to put Kansas in front. For Selden, the basket gave him his career-high in scoring. For the Jayhawks, it was much, much bigger.

But, as the crowd roared back, Kentucky freshman Jamal Murray quickly answered with a two-point basket right around the free throw line.

After getting fouled the other way, Ellis stepped to the line with the chance to give Kansas the lead. He missed the first free throw, and Kansas was in danger of falling at home for the first time in two years. However, before shooting the second, Ellis received a few words of encouragement from his point guard.

“I told him to take his time,” Graham said. “We needed one. So he knocked it down.”

With less than five seconds to play, the Wildcats turned the ball over on their final regulation possession. Junior guard Frank Mason III had a half-court shot to win at the buzzer, but it narrowly missed, causing Kentucky coach John Calipari to sweat a little bit.

In the extra period, Selden continue to provide the hot hand, managing to impact the game from all areas of the court and even outside of it, at least briefly.

For the third time in his career, Selden ended up deep in the Kansas crowd after diving after a loose ball. And that effort showed in all phases, as, moments later, he pulled off an emphatic poster slam over Kentucky freshman Skal Labissiere to put Kansas up two.

“He was going in there a couple times and getting his shot blocked, so he decided to go and turn it over on somebody’s head,” Graham said.

That dunk gave Selden the first 30-point game of his career, and it gave him 1,000 points for his career. He'd finish with 33, as Kansas finally converted from the free throw line to ice the game.

In overtime, it seemed like Kansas simply had an extra boost of energy over Kentucky, which Selden attributed to the team's experience in close outings this season.

“We’ve played games longer than that this year,” Selden said with a smile.

However, after playing 44 minutes against the Wildcats, it made sense that Selden would be tired. In fact, in the postgame press conference, as he reached for a cup of water on the table, he was disappointed to learn it was empty.

After checking the other cup on the table and letting out a pretty big sigh, Chris Theisen, Kansas' assistant athletics director, handed Selden a cup filled with water. Selden took the cup, looked over at Theisen and nodded, while Graham, who was sitting next to Selden, gave Theisen a point and a wink.

It was a different mood from the last meeting between the two teams, when Self jokingly said he wished the cup on the table was filled with vodka after losing by 32.

Instead, the players were all smiles, although Self was quick to note they couldn't afford to dwell on the win for too long, knowing the team has to get ready for it's next game against Kansas State.

“The reality of it is, this is just a small step to get us positive momentum to go back to what is really important,” Self said. “K-State is a rivalry game, and you can't take [conference] games for granted.”